Blog - Latest News
You are here: Home1 / Article Archive2 / I was there3 / An overconfident ferry pilot flies a Stearman to Oshkosh

I was building flying time by ferrying airplanes on weekends but this was one sorry looking airplane. Originally a proud training plane for the military prior to World War II, it had become a crop duster. The fabric was ripped in numerous places and the interior was sparse. I studied the logbooks and pilot’s operating handbook at home for a few evenings.

To make sure I could make it to Oshkosh, and a possible new owner I applied duct tape to each rip I found in the fabric. It probably took 20 ft. of duct tape.

Early Saturday morning the engine started easily and ran smoothly throughout the takeoff and climb to a minimum safe altitude. I turned north, and picked up the east side of the Mississippi River. My self-checkout of three takeoffs and three wheel landings the day before gave me the confidence of a low time, commercial pilot. Hell, I could fly this airplane and probably the box it came in.

I knew it would save time, so I headed straight north. I didn’t want to fly close to St. Louis—too many airliners making their approaches. On a heading of 45 degrees I knew I would pick up the north/south grid lines of the southern Illinois farms.

I’d planned a fuel stop at Bloomington, Illinois, and checked the aviation chart. A fairly large town was coming up. Dropping down to 1000 feet, a water tower gave me what I needed: CENTRALIA was painted on the tank. 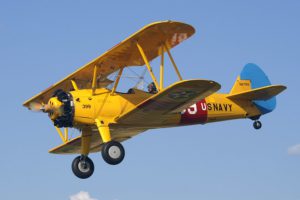 The Stearman is an honest airplane, but it does require serious training in order to fly well.

As soon as I saw the name, I climbed back to two thousand feet and checked the map again. Bloomington was a little over a 110 nautical miles away. Vandalia, Illinois, passed off to our left and we flew over Decatur.

Our altitude ranged anywhere from 1000 to 2000 feet. If I saw something interesting, I dropped down for a closer look. The freedom of the flight was exhilarating. The old airplane flew like a dream and I occasionally did some steep turns and then, down low, some turns around a point.

I descended to traffic pattern altitude, looking for the windsock to determine which runway to use. I’d been watching the wind patterns on the small lakes and ponds along the way and the leeward side of the water gave me an overall impression that the wind was from the northwest. The windsock confirmed we were landing toward the north.

One small airplane appeared to be on final approach. As we passed abeam the end of the runway, I took a quick glance at the POH to make sure I had everything in order. Keeping the end of the runway in sight, I brought the engine power back to idle and began a gliding turn to the left. Every landing is a series of balancing airspeed and glide angle all the way to touchdown.

I settled into another lovely, smooth wheel landing, cleared the runway, and taxied to the fuel pump. I shut down the engine, climbed out of the cockpit and chocked the wheels.

Hoping that the fuel attendant didn’t fall off the tall ladder he was using, I finished my walk-around, impressed with how the duct tape was holding. It made me wonder if you could build an airplane with the stuff. As the young man climbed down from the ladder, I walked over to the office to pay the bill.

I wanted to land in Oshkosh before sunset, so I didn’t have to get that airplane on the ground in the dark. I quickly paid for the fuel, found the toilet, used the vending machine, and walked back out to the airplane.

I climbed back into the cockpit, buckled my seatbelt and called “CLEAR.” The airplane started again readily and I taxied out for takeoff, munching on a packet of crackers and cheese.

Leveling off at 3500 feet, I looked around to clear the skies around me and trimmed the airplane for near hands-off flying. No time for diddling around sightseeing—I wanted to ensure a landing before dark.

I flew around the western edge of Chicago and picked up the western shore of Lake Michigan. I descended to 1000 feet in order to avoid airline traffic in and out of O’Hare International Airport.

Thirty minutes past Chicago, we were over Milwaukee and the huge stain in the lake water around it. I wondered how much of that stain was due to used Schlitz, the beer that made Milwaukee famous (a popular beer commercial at the time).

Further north we dropped down to make sure we were flying over Sheboygan. I decided that it would be cool to be from Sheboygan just to be able to frequently say the name, Sheboygan.

Heading west from Sheboygan, we approached Oshkosh from the east, over Lake Winnebago. That lake is nearly ten miles across.

I’d read a magazine article about flying in for the airshow and knew that, without a radio, I would have to enter the airport traffic pattern and wait for a green light from the tower signaling permission to land. The sky was full of small airplanes. 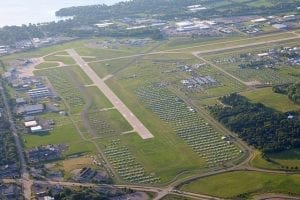 It was obvious they were landing on the westerly runway. I circled to the north and entered the left downwind leg for landing. I was stunned by the size of the crowd on the ground. Booths, tents, and airplanes crammed all of the space around the runway. I had no idea where to go once I was on the ground.

In the pattern, I tried to fit into the landing airplanes. Flying at sixty miles an hour wasn’t going to be enough. Some of them were obviously slower. I didn’t recognize the type of airplane ahead, but it looked like a homebuilt. I made left and right turns to increase the space behind the airplane, zig zagging, but it didn’t improve our position. I decided to extend the downwind leg before turning left on the base leg.

We were over the end of the runway and, not that far ahead, the airplane we were following was finally making a turn off the runway. I felt a buffet, indicating the approach to a stall. Instead of adding full power and making a go around I brought in just a bit of power and lowered the nose to pick up speed. It wasn’t enough. We dropped onto the runway from ten feet in the air. The bounces were epic.

The left wing dropped, trying to stall and enter a spin. I crammed on full power while stepping hard on the right rudder, and horsed the control stick hard to the right. We took an enormous bounce, but I saw that the runway ahead was clear.

The torque of full engine power pulled the Stearman’s nose further right. This, combined with me holding right rudder and right aileron, pointed the airplane at the crowds lining the right side of the runway. They scattered and ran for their lives. Again, instead of making a go around, I tried to save the landing I was so horribly spoiling, now clearing the crowd from both sides of the runway. Three bounces later, I finally came to a somewhat controlled stop near the far end of the runway. Fortunately there were marshals, with paddles on either side of the runway. They waved me off the runway to the left. As I cleared the runway, I signaled one of the marshals to climb on the wing to talk.

Reluctantly, the marshal did so and held onto the side of the cockpit. I learned that there would be marshals all along the way to steer me to the parking area specifically set aside for Stearmans. The marshaler off the wing, I slowly followed the chain of guidance until I finally arrived at the area set aside for Stearmans. I shut down the engine and looked around as the propeller stopped. The old Stearman and I looked like rag pickers at an upscale cocktail party. Every other Stearman there was show room quality. I quietly muttered an apology to the old girl for having us make such an embarrassing arrival. The landing had been all my fault. Nothing to do with her.

After turning over the paperwork to the new custodian, I mingled with the crowd as many of them were heading for the exit. I had planned to stay and enjoy the show, but not any longer. Head down, I tried to blend in, hoping that no one would recognize me as the sloppy Stearman pilot who made the horrible landings.

The three wheel landings and the bit of air work that I had completed on my self-checkout flight had not been enough. I was not ready for the slow speed approach and landing which would have made a full stall landing much more appropriate. I had nearly crashed the airplane and could have possibly injured a lot of people. My embarrassment was oppressive but the learning experience had been a thorough one. The overconfident, young commercial pilot had a lot to learn but I knew I was a willing and enthusiastic student with a long career ahead. Patrick Gordon
Patrick is an ATP with over 15,000 hours total time. He has worked extensively in the Middle East, including time as a training captain on Gulfstream and Falcon jets. He has worked as chief pilot for a Fortune 500 flight department, and as a consultant for VVIP flight departments. Patrick also has a yacht captain license.

Friday Photo: a perfect picture over Nebraska
Scroll to top