In most aircraft there is a composite of steam gauges and boxes with magenta lines. The magenta line boxes come in all sorts of shapes and sizes. Some have rudimentary data by today’s standards and others are the latest whiz-bang, crisp and bright displays, ready to please the most discerning gadget consumer. And therein lies this story: a story of mechanical wisdom supplanted by the frailties of the human master.

I admit, I might be one of those gizmo-seekers in search of the most able safety feature gizmo to date. My home basement has an abundance of discarded wires, chargers, and squarish boxes that collect dust in abandoned cardboard boxes. They were new once.

But let me get along with that story. The aircraft that I fly is tricked out with a high-tech minimalism of the G1000 NXi. And lo and behold, the other day it decided to bite my hand. The very hand that paid for it, no less!

On a very short trip of about 70nm to Caldwell, NJ (CDW), my human frailty showed its colors. But before I delve into that, let me point out two other gotchas that have plagued this high-tech minimalism world of flyers.

The first is in the loading the approaches while on an IFR flight plan. It is quite simple: press the PROC button and a selection appears for Arrivals, Departures, and Approaches; select Approach mode and it lays options of which IAF to go to. I always use the outermost IAF, that way all the intermediate fixes are loaded in and I can easily select a different segment of the approach if I am being vectored. Once that is done, I load the approach. 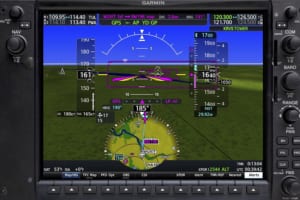 Now bear in mind that the “load” feature does NOT mean that the approach is “activated.” In other words, the loaded approach will be a two-dimensional “displayed” advisory with all the lines preprogrammed on the multifunction display, but it cannot be used for actual guidance. And if the autopilot is in use, the GPSS will not guide the horizontal or vertical path towards the runway. One has to manually go back and press the Approach button and select “Activate Approach.” Once the Approach is activated, only then the autopilot can be armed to follow the flight director down the rails by pressing the APR button.

If you happen to accidentally double tap (in turbulence) any button, the magical boxes deem that you are negating the previous command. So always look at the top of the PFD screen where the AFCS (Automatic Flight Control System) current mode of flight is displayed (AFCS mode box). On the subject of double tapping, after pressing a button always look up at the AFCS mode box to note the effect is appropriate for the action taken. If you press the autopilot button, check if “AP” is displayed. If you accidentally double-tapped the AP button, the ROL mode will be displayed. If the altitude is not selected in the preselected altitude window and the ALT is not pressed or double-pressed, PIT will be displayed in the window above. If NAV is pressed, then confirm that “GPS” is displayed and if HDG is pressed HDG is displayed. Otherwise, in circumstances where the soft grey clouds restrict outside the vision, things can go bad pretty quickly.

Another minor gotcha is in when using the Vertical Navigation mode. During arrivals most of the “hard” altitudes displayed on arrival charts (in blue color in a Garmin box) are preprogrammed into the boxes, (altitudes in white are for advisory only). Similarly, approach intermediate hard altitudes are as well, thus making it very easy for the pilot to follow along either hand flying or by autopilot. One must however preselect the lowest altitude on the chart for the aircraft to follow. Failing that preselected altitude discernment, no amount of coaxing will make the aircraft fly the arrival procedure or descend when required, if on autopilot.

But “magical Betty” in the box is quite good at giving us a warning one minute before arriving at top of descent (TOD), to ask us to manually arm the mode by pressing the VNAV button, failing which the aircraft continues to fly along its merry way ignoring the procedural arrival path. So, it behooves us to remember the two gotchas: select arrivals, the initial fix as specified by the ATC and the lowest preselected altitude, and then arm the VNAV when “magical Betty” in the box states, “Vertical Navigation.”

Now, getting back to my dilemma on that short flight. I filed an IFR flight plan and got pretty much what I wanted. On entering the clouds I found the unholy turbulence that regurgitates the stomach acids violently. Nevertheless, I pressed on with all the emotions of a 12-year-old. The New York controller cut my flight plan shorter with a few shortcuts and I soon broke out from the messy cumulonimbi into a stratus layer at 3000 feet, with less shaking-and-baking.

I made the turn towards the airport with a 22-knot tailwind, doing 170kts over ground and 150kts indicated airspeed, when ATC said, “keep your speed up.” Hmm, I wondered, who else might be thundering down the valley behind me? But being a conciliatory kind of guy, I soldiered on. Five miles from the IAF and 180 degrees from the runway heading (I was on a long right downwind in IMC), I pulled back the power when ATC gave me my first 30-degree vector. I requested a lower altitude and got “2500 till established” and dutifully put the HDG bug on the suggested heading and changed the altitude preselect all the while buzzing through the grey. 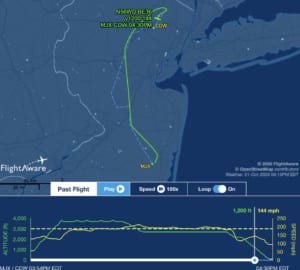 The autopilot was performing ably, while the MFD showed me my relative position. Thirty seconds later another heading change was suggested, at 90 degrees, to intercept the localizer for the LOC runway 22 approach. By then I was half a mile from the intercept and as would happen, I swam right though the localizer at 2000 feet and 140 kts over ground. ATC recognized this immediately because he had not cleared me for the approach yet. He vectored me back to 250 degrees to re-intercept the localizer and then ceremoniously dumped me on the tower’s lap—after all he was New York ATC and had bigger fish to fry in his rat-tat-tat world.

I turned the heading bug to the suggested heading and called the tower, who was expecting me. But in that wild ride in IMC, I noticed I was sailing right through the localizer again. I gave it a moment or two to confirm that the autopilot was not engaging the localizer, even though the procedure was activated and APR was armed. Hmm, I thought, screw this. I am going to hand fly this approach down to minimums. And as surely as “mind over matter” shows its superiority, I broke out 400 feet above the minimums with mist and rain clouding the forward visibility. Leveling at the Minimum Decent Altitude, I looked for the lights, acquired them straight ahead of me, and then the runway environment and landed safely.

The moral of the story remains: technology is great, actually wonderful, but we, the children of the magenta, better keep our personal flying skills intact because we will be challenged to use them when the proper sequence of buttons are not pressed according to what the IFTTT (if-this-then-that) boxes want from us. In my case (you might have guessed it by now), the GPSS follows the NAV button and not the HDG button when intercepting the localizer, glide slope indicator, or the LNAV and VNAV pathways. So not pressing the NAV button while still on HDG mode never told the autopilot what to do next. The hairy, high-density ATC filled with heavy aluminums in the sky expect us to follow the proper procedures of the boxes that we fly in the sky, safely.

So, that brings me back to the issue of using a mental checklist of the buttonology dense boxes that we fly. The linear commands in the boxes follow the predesigned software principles of if-this-then-that and it is up to us to know and follow the sequence of commands we issue the boxes. In a fast and furious world of New York/Newark airspace, missing one press of the button can lead to an unnecessary missed approach—or worse.

Perhaps, create a simplified checklist for the buttonology commands and practice the procedures frequently and hand-fly more than flying coupled approaches to keep your skills sharp. And one more in the advice column: “follow and manage the autopilot behavior closely throughout the procedure and stay in the game with spatial orientation!”

The long way back to the cockpit