Blog - Latest News
You are here: Home1 / Article Archive2 / I was there3 / The long way back to the cockpit

Forty years ago, I was a US Air Force flight engineer with a CFI. In addition to my commercial ticket, I had instrument and multi-engine ratings. Married with two young sons, flying was a little more than a passion and a little less than an obsession with me. In between deployments to Saudi Arabia, Iceland, and Okinawa as an E-3A flight engineer, I dropped jumpers from Skylanes and did some instructing in Tomahawks. I attended instrument refresher courses with my pilot colleagues. Anyone who knew me knew exactly where I was headed.

Then I started night school, working on an engineering degree. Night classes turned into full-time undergraduate work and an opportunity for a commission in a non-flying job, bringing an end to my time in an Air Force cockpit. I wanted to keep flying as a general aviation pilot, but I was trying hard to make a name for myself as a young scientist, and I had also started grad school. Keenly aware that avoiding ending up as a grease spot on the runway or at the bottom of a smoking hole meant devoting a minimum number of brain cells to aviation, I reluctantly let go of flying altogether. 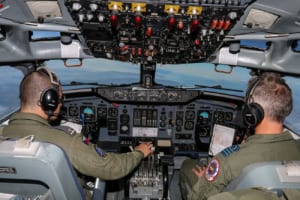 After a career riding in these, does it make sense to get back into general aviation?

Years later, with a PhD under my belt, I was invited to interview for a faculty position in Michigan. One of the faculty members co-owned a Piper and, knowing I was a pilot, invited my wife and me for a flight on a beautiful fall day. The fall color was spectacular from the air, and I had been spending most of the time looking out the window from the right seat when my host asked, “Do you remember how to use a VOR?”

I grinned and said, “Sure do!”

He said, “OK; what’s our bearing to the airport?” Hesitant, but still smiling, I centered the CDI. Then, he looked at me and asked, “Do you want to fly?”

I remember taking the controls for the first time in almost 15 years. Gently maneuvering, I was a little surprised to have muscle and “aviation sense” memories coming back to me so easily. The owner, also smiling now, said, “Let’s head on back. Your airplane.” Now fully engaged, with the left-seater running the radios for me, I turned back to the field. Soon enough, we were letting down into the pattern, and I found myself on final, glancing left and wondering when the owner would take back the airplane.

He never did. We were on short final and I was still flying… then over the threshold… and then I flared into one of the sweetest landings I had ever done. On rollout, I was blinking away tears. As we shut down and opened the doors, I was wondering what words could possibly be adequate to describe how much I missed flying.

I never took the Michigan job, and—now an empty-nest couple—my wife and I moved to Arizona. Another 15 years went by, with career advancements and grandkids, but no flying. Then one day my wife dragged me—almost literally—to see the movie Sully, which she had already seen with a friend. “Why do I want to see this?” I grumbled. “Everyone already knows how it ends!”

She simply replied to my every protest, “You have to see this movie.”

My wife was right: I was moved and very surprised by the pull on my heart. As we were headed to the car, she quietly asked, “See?”

I had missed it. I missed flying deeply, badly, in my bones. Hearing the radio chatter, the way pilots talk to each other and with controllers, being immersed again in a world now decades in my past, I was suddenly and keenly aware of how I had loved flying; how it was still such a part of me; how I still loved it and how I always will.

For Christmas 2019, my wife handed me an envelope. On the outside, she had written the words, “YOU HAVE TO USE THIS.” On the inside was a gift certificate at one of the many flight schools in the Phoenix metro area. She had conspired with a good friend who is a Southwest first officer and former USAF KC-10 pilot and T-6 instructor, so she knew the vocabulary when she visited the flight school and asked how much it would cost a very, very rusty aviator to “get current” again. 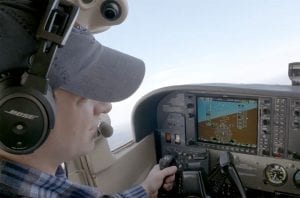 For a very rusty pilot, this technology is amazing.

I’ll be forever grateful to my wife and also to the governor of Arizona, who declared flight schools to be “essential businesses” during the spring 2020 COVID business closures. The gift certificate, treasured as it was, didn’t go far: as soon as I had a signed medical certificate, I was logging hours; first with a flight review, then high-performance and complex endorsements, then getting current again on instruments. With GPS technology and glass cockpit Cessnas, modern IFR was a whole new world for me. I flew Aspen and Garmin systems, trying to soak up everything. It was my privilege to have Jim Terpstra, ATP and retired Jeppesen senior VP (and someone who’s forgotten more about IFR flying than I’ve ever known) as my CFII. Visiting my mom and sisters in Florida, I stopped in at the Clearwater airport to bag three flights in a beautiful Socata TB20.

In Arizona, visits from our three grandkids turned into excuses for IFR cross-countries: my wife and I would fly to Albuquerque and land at Double Eagle (AEG), after which I would fly the two older granddaughters back to SDL, and my wife and 4-year-old grandson, David, would fly from ABQ back to Sky Harbor on Southwest.

Earlier this year, we were saddened to find out our oldest son’s career would take him and his family from Albuquerque to Maryland. For what might be one of our last “New Mexico runs,” we offered to bring our young grandson, now five, to Phoenix to stay with us while his mom and dad and two sisters made the cross-country haul with their pet menagerie. We figured it might be David’s last opportunity to fly with “Popi” at the controls for a while, and it would spare everyone (including his parents) days of him being strapped in a car seat for marathon drives.

In a rented Cessna 172, we rode mountain waves and turbulence almost all the way to Albuquerque. We grabbed a crew car from the good folks at Bode Aviation and drove to our son’s home, where the entire family was finishing packing up. After a much-needed lunch, some frozen yogurt, and farewells to everyone else, we were headed back to Double Eagle with David, his little roller bag, his car seat, and a snack-filled backpack.

David and his car seat fit nicely behind me, where he and my wife could see each other. We walked around the plane and talked (at the 5-year-old level) about the flight. We made sure his headset fit, and powered up the avionics bus to show how he could talk and listen to us. He seemed fine with the idea that I would be busy before and after takeoff with tower, departure, and center controllers. He readily agreed that “If Popi raises his hand, it’s time to be quiet so we can listen to the radio.” 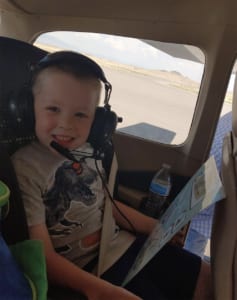 This makes all the hard work worthwhile.

The ride back at 12,000 was initially a little bumpy, but smoothed out nicely east of the Zuni VORTAC. David sang songs and was excitedly chatty with my wife for about an hour before dozing off. Near Holbrook Muni, I asked for and received direct Scottsdale. I was cleared for the DSERT2 arrival (flying a STAR, I admit, was an unexpected but welcome experience), and then further given holding instructions due to a disabled aircraft on the runway at Scottsdale. After I read back the instructions, my wife asked me why I was smiling. “Because I know exactly how I’m going to enter holding,” I replied.

As the sun set, Phoenix approach vectored me toward SDL and cleared us for the visual approach to runway 21. We lined up on final just late enough for me to log a night landing. David had his “listening ears” on high gain and knew not to wander as we unpacked on the darkened ramp. We walked through a brightly lit hangar with five parked, gleaming corporate jets and loaded into our car for a freeway ride home that seemed pretty tame by comparison.

David stayed with us for 10 days before flying on a Southwest 737 with my wife to his new home in Maryland. After he left, I reflected on how life, as it always does, had doled out some surprises—one of them being a change in my career plans decades ago. Growing up, our sons heard lots of my Air Force flying stories but never got to fly with me. Our grandchildren have, and now they also know: flying wasn’t my career, but in my heart and soul… I’m a pilot. David Tyler
David learned to fly in the University of North Dakota program while stationed at Grand Forks AFB as a B-52 crew chief. As a USAF flight engineer on C-130 E/Hs in Arkansas and E-3As in Oklahoma, he logged over 3,000 hours while earning a commercial pilot license with instrument and multi-engine ratings and a CFI. Currently a senior principal research scientist and technical fellow with an R&D company serving the government, David has over 500 hours as a pilot and is preparing for a CFII check ride.

The magenta line children and buttonology
Scroll to top