Blog - Latest News
You are here: Home1 / Article Archive2 / I was there3 / Helicopter escapades in the Arctic

Helicopters depend on a complex interaction of rapidly moving parts requiring meticulous maintenance to function reliably. When it all works, the result is a magic carpet ride to places inaccessible to any simple fixed wing aircraft. At the same time, feeling comfortable in helicopters requires an unswervable belief that various key parts such as rotors, gearbox, shafting, and blades will stay connected and keep rotating long enough to make it back to earth in one piece. I was fortunate enough to have this belief and to enjoy spending hundreds of amazing hours in many different helicopters, from the iconic Bell 47 to the Sikorsky S-61. To top it off, I actually got paid for most of these experiences, using helicopters to support our Arctic sea ice research projects in Alaska, Canada, and Norway starting in the early 1970s.

Unlike many of my colleagues, I never encountered a major mechanical problem in the air apart from infrequent engine chip lights, which we took seriously. What I did encounter were numerous occasions when weather and the demands of the job pushed the operating envelope way beyond the pale. Here are a few escapades that remain etched in my memory. 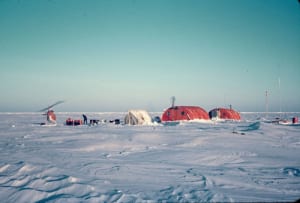 This is a bad place for a mechanical problem.

My adventures with the iconic Bell 204 and 205 “Huey” began in 1969 when the Vietnam war was full on. Rotor blades were in short supply and our Bell had been waiting for more than a month as a crack in one of the main blade roots gradually expanded. The pilot decided to ferry the 204 about 80 miles inland to the “big” town of Inuvik (pop ~3,000) and offered me a ride-along in the right seat. After a month in the tiny coastal hamlet of Tuktoyaktuk (pop ~800) in Canada’s Northwest Territories, I was bushed enough to jump at the chance to see some “city” lights.

Before leaving, the pilot proudly showed me the chalk marks tracking the progression of the crack. It wasn’t until we were trucking along about 100 ft above the muddy Mackenzie River that the true lunacy of my mission really clicked. From that point on, the flight in my mind became a race against time, with my imagination in overload. Needless to say, the feeling of relief as we settled gently onto the ramp in front of the Inuvik terminal felt like winning the lottery.

A few years later, we chartered a float-equipped Bell 205 with over 4,000 pounds sling capacity to move hundreds of barrels full of crude oil from where a barge had unloaded them into a huge heap on the beach, about five miles overland from where they were needed. This operation involved rolling about nine of these 450-pound drums into the center of a large cargo net, and then hooking up. Loading was hard physical work but hooking up was scary. The pilot hovered a few feet above my face as I crouched on top of the load to secure the short lanyard to the belly hook. For some reason, he had forgotten to bring a long line that would have allowed us to stand safely off to one side and quickly get out of the way if anything went awry. The memory of being trapped between the big rubber floats surrounded by deafening noise and gale force winds and dust with the belly hook practically in my face is one I’ll never forget.

The Huey was a great machine to fly in under normal circumstances. The jumbo-sized cabin took anything you could throw in and the characteristic thump-thump of the big twin blades announced your arrival a good ten miles away in the cold Arctic air.

After the fall of Saigon, there was a surplus of amped up helicopter pilots in the US. Flying traffic in LA or Atlanta just didn’t cut it in terms of adrenalin output. Fortunately, operators in the Arctic were looking for pilots as oil and gas activities expanded. Here in the last frontier with no regulators within a thousand miles, pilots recently out of the jungles of Vietnam could continue to operate in survival mode. Much to the dismay of many non-pilot passengers, this style of flying provided moments of unwelcome terror. 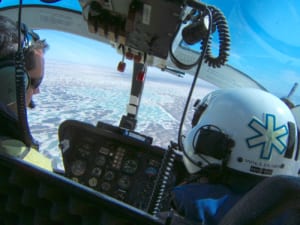 Low level in a BO-105 over the Colville River in Alaska.

Standard operating procedure was to make sure we were always below 50 ft AGL even if that involved nap-of-the-earth flying, popping up over the very low, undulating, featureless terrain that characterized the Arctic coast. There was no risk of enemy fire but that didn’t matter! Another standard practice was to celebrate surviving another “mission” by heading directly for the cook tent as low as humanly possible, and then zoom climb, missing the doorway by a few feet. The grand finale was to continue the steep climb and expend all the available momentum before rolling and falling off the top while suspended in zero gravity for a few seconds. I found these antics great fun, a point of view not universally shared by the rest of the crew.

On one occasion in the early 80s, we were returning to the Inuit settlement of Sachs Harbour from a long, cold day drilling holes and making measurements about 80 miles out on the sea ice west of Banks Island in the Canadian Beaufort Sea. With four of us in the AS350 A-Star in good spirits anticipating a hot dinner, the pilot suggested a game of “how long can we stay stabilized without touching the cyclic?” The goal was to see if we could maintain level flight by using our own synchronized weight shift to control pitch and roll. By moving in unison we managed to hold attitude for a surprisingly long time—all the while bopping to the pilot’s tune track over the intercom. Zooming along in this bliss state 50 ft above the ice with pressure ridges flashing by on an intensely bright, blue-sky day was a truly meditative experience.

Gradually, these old, bold ex-military pilots faded away through attrition or age and Arctic helicopter operations in the 90s became much safer and less exciting.

Whiteout presents a potentially deadly condition, especially in the endless expanse of the Arctic in winter. The horizon disappears and contours of a snow-covered surface become indistinguishable with no shadows. Depth perception is nil and there is no way to judge height. Fortunately, dark objects are still visible. I remember being in an A-Star coming in to land in a whiteout when the pilot asked me to throw a shovel out the door. At that point, I would swear that we were only a few feet above the ice. Instead, I became mesmerized counting the seconds as the shovel twirled down through the whiteness before finally embedding itself in the snow. We must have been a good 50 feet in the air. The landing was fine, once the pilot had the shovel in his view as a fixed reference. 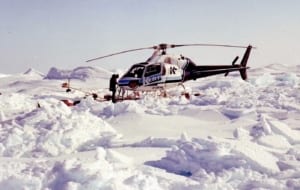 With whiteout a constant threat, no landing was taken for granted.

In another case of whiteout, we were returning in the Bell 206 Jet Ranger to our camp on old thick ice about 600 miles south of the North Pole. The weather came down quickly and the pilot elected to land while he still had a touch of horizon and depth perception. By the time we shut down, the whiteout was fully developed. I stepped out and literally couldn’t walk five feet without falling on my face. The inability to distinguish features on the ice surface was totally disorienting. There was no other option but to spend the night in the Jet Ranger bundled up in our survival bags—uncomfortable but safe. In the morning with visibility restored, I climbed up to the crest of pressure ridge beside our landing spot and there was our camp a few hundred feet away!

As a total contrast to the usual flights blasting along on the deck, we were forced up to unheard of altitudes one day over the ice in the Beaufort Sea about 70 miles offshore of a Distant Early Warning (DEW) site called BAR-4. These radar sites were constructed in the 1950s, stretching from Alaska to Greenland as means of detecting Russian bombers and ICBMs. The radar operators cooperated by providing a range and bearing of our helicopter from the DEW station. By lifting off and staying overhead our camp, we could work out our ice drift—often several miles a day. Remember this was long before GPS and we had no LORAN, VOR, or other means of pinpointing our position.

On this particular day, the operators could not get a fix on the Jet Ranger. The 206 presented a small radar target and was notoriously difficult to see on the screens at the best of times. We kept going up and up until eventually they captured us as a target at 11,000 feet. Conditions were perfect for flicker-induced vertigo—a bright sun coming through the rotor blades and no relative motion, apparently suspended high above a frozen expanse of white in all directions. The result was a sensation of total panic that I have never experienced before or since in an aircraft. Fortunately, the pilot seemed immune and a feeling of normalcy returned at the more familiar lower altitudes. I joked afterwards that if the Russians came over the pole in a fleet of Bell 206s at low level, we would never know what hit us.

I have always loved flying in helicopters. That moment as the weight lifts off the skids, followed by the nose down translation accelerating to forward flight is amplified by seeing the world spread out beneath your feet. It truly feels like flying through space with no visible means of support. Very few if any airplanes can duplicate that sensation (except maybe the highly unusual Edgley Optica, built in small numbers). If only private helicopters weren’t so expensive! For now I’ll have to be content with our Cessna 150. David Dickins
David learned to fly on a tailwheel Fleet Canuck in Canada in 1966. After a 38-year time-out for family and work, he returned to flying in 2009 in San Diego. Since then David has logged over 550 hours with a mix of Cessnas, Pipers and LSAs. He currently co-owns a 1964 Cessna 150E based in Monterey. During his arctic career, David experienced the challenges and risks of extreme bush flying in some of the most remote regions of the planet from the cockpits of a wide variety of chartered aircraft and helicopters.