Blog - Latest News
You are here: Home1 / Article Archive2 / I was there3 / Really short and really soft fields—flying C-123s in Vietnam

The Fairchild C-123 was powered by R-2800, anti-detonation injected, reversing prop engines. The also had antiskid brakes. We had the capability to get rid of all of the fuel we were carrying. The fuel was carried in nacelle tanks behind the engines and two pylon-mounted tanks on the wings. We had four switches overhead to drop either one or several or all of the tanks. The aircraft was unstable, as if it were mounted on a pinnacle trying to fall off. When it rained you got wet in the cockpit. During the rainy season, we wore ponchos and carried all of our maps in plastic wrap.

I was stationed in Saigon, Vietnam, with the 19th Air Commando Squadron flying C-123 aircraft. We achieved an extremely proficient operational ability in all aspects of flying the aircraft. We did this by operating the aircraft into and out of some of the most demanding landing sites imaginable. We landed on roads, fields, sidewalks (Song Be City), and runways made of grass, laterite, sod, clay, asphalt, and PSP steel planking. This was done at a rate of from 20 to 30 minutes between landings and a rate of up to 20 to 30 times per day. This led to the high proficiency necessary to accomplish the demanding missions of our operations. 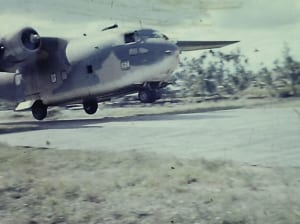 An assault landing is a fairly dramatic event.

We definitely got enough practice of short field, soft field, and slick field takeoffs and landings, as we were doing them almost every day and numerous times each day. The landing for short landing areas were what we called “assault landings.” Configuration and positioning the aircraft on short final could be done from any altitude. You simply flew until the runway disappeared under the nose of the aircraft, then accomplished the assault landing configuration, with prop levers full increase, throttles closed, gear down, and flaps full down. The aircraft would descend between 3000 and 4000 ft/min and appeared as if it were backing up away from the runway. You would hold this until it appeared that you are on a reasonable final approach angle.

Then the throttles would be advanced to hold this angle in transition to the angle of attack indicator. We flew the angle of attack indicator, and used throttles to adjust the touchdown point until just above the touchdown point. Then we would close throttles, flare, touch down, lift the throttles, and pull them into full reverse thrust. Full reverse thrust gives us about 80% of max power. At really short runways, we would stay in reverse thrust until the swirls came around from behind and pretty much put us IFR (zero visibility). We would stay in reverse until we felt that we were either stopped or backing up and then we came out of reverse. Needless to say, we were on our antiskid brakes while all of this was happening. Empty I think we could stop at about 700 to 900 feet.

Stabilized approaches, for the most part, were used at larger runways but each of the other landing areas had various obstacles or other reasons that we could not do that. For example, Song Be had a mountain directly in line with the landing area and also had a large tree to the right of the runway about 50 feet from the end of it. This necessitated a close-in, slanted base leg with an offset to the runway until passing the tree. After passing the tree, you quickly offset back to the right to touch down in the middle of the landing area. There was a walkway in the middle of the landing area and you had to get your nose gear on and stay on that walkway to prevent your wingtips from hitting chain-link fences on both sides of the runway. The runway is listed as 120 feet wide. Our wingspan was 110 feet. Turning around at the end was accomplished with the flight mechanic outside on intercom headset, while we maneuvered, similar to doing an automobile three-point turn on a narrow highway. It took about maybe six to eight turns and backups to accomplish this turnaround.

The photo above displays how proficient we were by showing an approach and landing on the very approach end of a very short runway. This was illustrative of our crews’ ability to maneuver the aircraft and touchdown with precision. If you look closely, you can see the end of the runway just under the landing gear. This is the proficiency that we strived for. 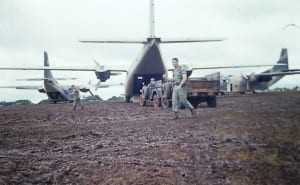 Many landing areas had no paved surfaces whatsoever.

Slick runways—we had them. The second picture that accompanies this article was taken at Quan Loi and is listed in our airfield directory as “use only when dry.” You had to be on top of your game to land here and keep the aircraft on the runway. Taxiing in the parking area was something else. You could turn the nose wheel steering max one way and add 100 RPM opposite the nose wheel position and the aircraft would turn opposite of the nose wheel. You could not put the brakes on and stop the aircraft. You had to find a rut and when you felt the main year go into it, you reversed the props to stop it in the rut. If you shut down without doing that, the aircraft would start to slide because the parking area was on a slant. Everybody referred to it as slicker than “greased owl s__t.”

Takeoff from a short field was done by pulling the yoke all the way back and wrapping the left arm around the yoke to the elbow. Throttles to max power, using the torque gauges; check all instruments and release the brakes. The aircraft would lift off when it was ready to fly. During takeoff from short fields, when we lifted off we were 15 knots below power-off stall speed. That meant that if you lost power, you stalled and you came down (hit the ground) from however high you were. We normally lifted off and leveled off a few feet above the runway or field and accelerated until we at least got past power-off stall speed. We now had 15 knots to go to get past minimum single-engine control speed. If you lost an engine prior to reaching the minimum single-engine control speed, then usually the procedure was to pull the other engine and put the aircraft down. Now you know why the aircraft was modified, adding the jet engines.

We hauled everything imaginable including people, combat troops, paratroopers, cargo of all descriptions, ammunition, vehicles, trailers, fuel bladders, drums, foodstuffs both frozen and fresh, animals, mail, and the wounded or dead. We also had flare missions. Our missions with the above included air para-dropping or free dropping and air landing.

Helicopter escapades in the Arctic