Blog - Latest News
You are here: Home1 / Article Archive2 / I was there3 / Into the muck 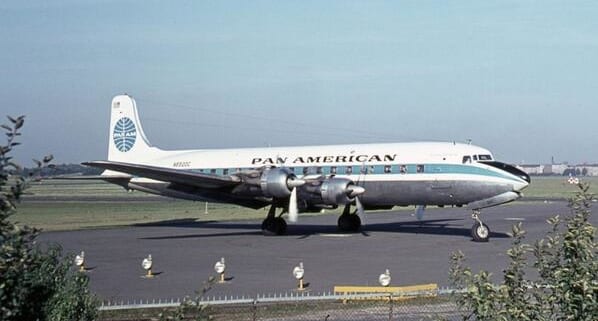 Flying in Berlin in the early days was an exercise in weather management that never seemed to come out exactly right, particularly when the summer days flowed into the crispness of autumn and then the dank grey of early winter.

Fog, low ceilings, and ticklish approaches became the norm during the winter months. It was a rare day that at least one of the airports in the system did not have weather at or close to minimums. The captains took great pride in always getting the aircraft to its dispatched destination. There were a few that carried the practice to extremes and bored the airplane into the undercast and through the white cottony fog toward the runway, breaking out just seconds before the wheels touched. They were superb airmen, most of whom had been flying the DC-6 for so long that they wore the old airplane like a comfortable pair of shoes. 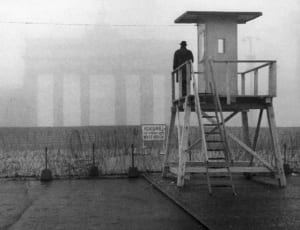 Fog in Berlin was often thick and long-lasting.

As the bleak winter twilight approached, the late afternoon flights always faced the possibility of a diversion. Atmospheric conditions were often just right for the formation of the pea-soup fog that was so prevalent in northern Europe. Brown coal was the fuel of choice in the cities, and as winter approached the pall of thick acrid smoke hung like a blanket over the city. You could smell it in the descent; as soon as the airplane dropped below 3,000 feet the pungent odor assailed the nostrils and made the eyes sting.

When the moisture content was right, and the winds wafted from the east, fog would form, thick and impenetrable, and the Berlin airports would close down for the night. Eastbound airplanes already in the corridor continued into the Control Zone and attempt a “look-see” approach, a maneuver that was permitted even though the weather was reported below minimums. A look-see was just what the name implied: a quirk in the regulations that permitted the flight to make an approach to minimums and “take a look.” If you could see enough to land you did; if not a missed approach was mandatory.

Sometimes you made it, groping through the murk, seeing the approach lights gleaming at the very last possible instant, then the runway flashed by beneath and the edge lights whipped by, barely noticed in your anxiety to actually see the concrete; then the wheels suddenly touched, you knew they would, but it was always a startling, grateful surprise, and by God, you were home.

On other occasions you would begin an approach and know the odds were against you; the previous airplane had probably already missed and the reports weren’t very good, in fact the visibility was getting worse, but you were going to try anyway. The state of the art of weather forecasting and reporting was still pretty much a guessing game, particularly where Berlin fog was concerned.

Your airplane descends into the gloom, the tops of the undercast slinging past the windscreen. Nowhere is the sensation of pure speed more evident than when flying just above the tops of a flat undercast. Now suddenly we are enfolded by the thick grey cocoon. Lower and lower we go; there is absolutely no sign of life beneath. We are immersed in a bottle of gray milk; the only indication that we are fast closing on the earth is the steady unwinding of the altimeter.

The tension in the cockpit rises imperceptibly as we enter the final stages of the approach. The air is silky smooth, benign, deceptively innocent in its blanketing of our world, our sanctuary. The outer marker passed, punctuated by the flashing blue light on the panel and the swing of the ADF needle. The landing gear drops with a satisfying thump and the three greens are almost an afterthought; when have they ever failed to appear?

The captain hand-flies the approach, eyes glued to the Zero Reader, a primitive forerunner of today’s flight director. It is mounted in the center of the glareshield, an awkward angle for either pilot, and the parallax must be solved by eye and experience. It is a strange irony that the only person in the cockpit with a straight-on, unfettered visual on the Zero Reader is the one who is powerless to do anything about it: the flight engineer sitting between the pilots.

Now there is a tingling in the groin, in the very seat of the pants, as the ground creeps up. Closer and closer we come to the decision height; that point in space hanging a few hundred feet above the ground where we must abandon the approach if there is still nothing to be seen. There is no radio altimeter here, no flight director, no Category Two. The baro needle stutters its way down the dial, and the copilot intones the altitudes as we descend, and then finally those definitive words spoken sharply, like a command: “Minimums! No contact!” 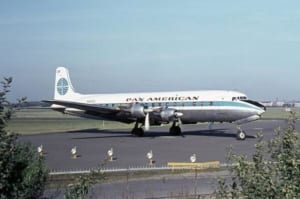 Landing one of these in Berlin was not easy.

Almost instinctively you raise your feet off the floor of the cockpit—you can almost feel the runway rushing by unseen beneath. Things are happening fast now: the captain calls rapidly for rated power and commands the raising of the landing gear. The airplane almost groans in its response; it is almost human in its reluctance to keep flying. So close to home, and yet so far away! This 60-ton mass must be arrested in its descent and pointed once again for the sky.

Hands fly about the darkened cockpit as the airplane, just a moment ago so close to returning to earth, must now gird itself and fly a while longer. For just a fleeting instant, no longer than a second, the pilots catch a tantalizing glimpse of runway lights glowing dimly through the fog below; they race by almost faster than the eye can see.

Now a new plan must be made. It is useless to dally here in the Zone. Precious fuel is being burned and it is clear that this flight is not going to be landing at Tempelhof. The nearest alternates are on the other side of the Iron Curtain, 180 miles away. While the airplane is being cleaned up and the gear and flaps tucked safely away, the captain is on the radio to the dispatch center. The fuel status and the weather in the west are the primary topics, and then a discussion on where best to put the airplane and passengers for the night.

A decision is made, and while the first officer negotiates a clearance to go back out through the corridor, the captain gets on the PA and gives the passengers the good news. He speaks in cool, measured tones, as though flying a dicey approach into one of the most difficult airports in the world was something that he did every day.

We climb back to a westbound cruising altitude and point the nose westward. We still have another hour before our day is done. John Marshall
John learned to fly at age 16 at San Francisco International Airport after a childhood of mostly gazing at airplanes and building airplane models. After a brief and forgettable college career, he entered the US Air Force as an Aviation Cadet at age 19, and went through multi-engine pilot training, graduating as a 2nd lieutenant and rated Air Force pilot in 1956. He spent three years as a flight instructor in Texas, then moved on to the Strategic Air Command as a Combat Crewmember in B-52 heavy bombers. He left the Air Force in 1963 to escape the talons of SAC, and with no airline jobs available anywhere, managed to find a corporate job with Aerojet General Corp in Sacramento, CA. In July of the following year he was hired by Pan Am as a flight engineer in Berlin, where he spent eleven very enjoyable years doing the industry’s most satisfying flying and living in the world’s most exciting, exotic, erotic city. He transferred to New York to check out as captain on the B707. He finally checked out in 1978, was made a check pilot the following year and was assigned to White House Press Charters.When the L-1011 came along in 1980, John was assigned as fleet manager for that airplane. He transferred to SFO in 1983 on the B747, and then came the Pacific Route sale to United. The West Coast bases rapidly shrank after that, and he ended up back in New York in 1989. He was based at JFK until the end, and on Dec 3, 1991 flew the last revenue flight to South America, flight 212 to Sao Paulo. The following spring he flew a Hajj out of Jakarta (a whole ‘nother story), and that fall went to work for Korean Airlines as a 747 captain, where he flew until mandatory retirement in 1995. In 1996, he went to work for the FAA in St. Louis, and is still there and still working. He stays current in the Embraer 145 regional jet as part of the job.