Blog - Latest News
You are here: Home1 / Article Archive2 / I was there3 / Full circle: learning to fly and retiring at SFO 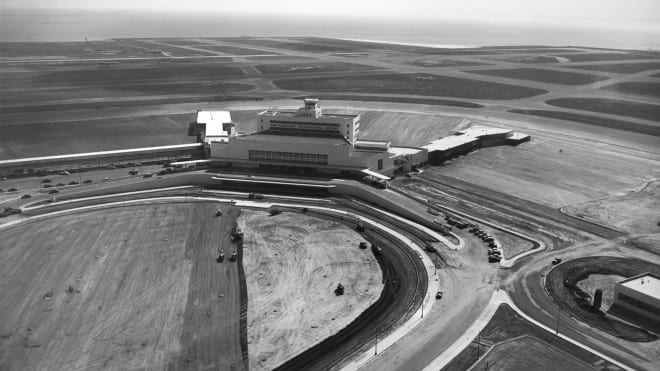 In 1952, San Francisco Airport had not yet achieved the grand title of San Francisco International; it was still called Mills Field. The ground would not be broken until the following year for the complex of buildings that is now SFO. The terminal building at Mills would have fit comfortably into the entrance lobby of today’s International Terminal. It was a calm and gentle place then; passengers arrived at leisure, and, after a simple check-in uncomplicated by the clicking of computer keyboards, they made their unhurried way along the sidewalk to the gate in the chain link fence that led to their aircraft, waiting placidly in the sun.

No one had yet hijacked an airliner, and onlookers and small boys were constrained only by the danger of walking into a turning propeller. I could, and did, spend hours behind the chain link fence patiently watching the arrival and departure of flight after flight, fascinated and awed by the majesty and presence of the man in the pilot’s seat.

The number of airlines that served the airport in 1952 were numbered in single digits: United was the colossus that stood astride half of the available ramp space, just as it does today, except that in 1952 the queen of its fleet was the DC-6. United had perhaps a dozen departures per day, including the venerable Valley Queen, a DC-3 that plied its leisurely way to Los Angeles with stops at Stockton, Merced, Modesto, ad nauseum (sometimes literally) down the San Joaquin valley to LAX. I think the trip probably took the better part of a day.

American and TWA were two long-lived entries on the short list of carriers in 1952 – American with their DC-6s sporting the orange cheat line that ended in the lightning bolt splashed across the nose, and TWA with its still-familiar red and white livery gracing their exotic looking Connies which sported names like Star of India.

Western Airlines was there with its newest acquisition, the Convair 240, the modern twin-engined airliner with the rear stairs that was loudly proclaimed to be the DC-3’s replacement. How could we foresee that long after the Convairs have served their purpose the old -3s would still be plugging along? Western, of course, is no longer, having been swallowed by Delta in the 1980s. The local entry was Southwest Airlines, strictly a DC-3 outfit that puddle-jumped back and forth across the coast range and into the valley, as far north as Eureka and south to Los Angeles. Southwest became Pacific Airlines, then Hughes Airwest, then they too became an irresistible morsel, easily ingested.

Across the way, at the seaplane base on the other side of the runways, was the Pacific headquarters of the mighty Pan American. A breed apart, the aristocratic flag carrier generated its handful of daily departures from its own terminal, and periodic sightings of the stately Stratocruisers taxiing down the long parallel taxiway always seemed to make the heart beat just a little faster. They were a majestic sight, ejecting great noxious clouds of Rislone from the cylinders of the huge Wright engines as they moved ponderously along.

Located snug up against the northern parallel taxiway, about where the American Airlines hangar is today, was a small building that housed the airport’s only fixed base operator. Owned by a dashing ex-Navy pilot named Harry Cranston, it boasted two vintage Ercoupes and a spanking new, exotic-looking V-tailed Bonanza. Cranston had a terse, no-nonsense manner and he dressed every bit the part, usually sporting a leather flying jacket that cried out “Dogfight!” and “Adventure!”

Learning to fly at SFO meant mixing it up with Pan Am flying boats.

During that high school summer, I frantically looked for work at the airport, willing to do anything that would require me to be in close proximity to an airplane. The opportunities were limited, and Cranston’s Flying Service became the last resort. I presented myself in the owner’s office, hat figuratively in hand. Perhaps he saw something of himself in the plaintive teen-ager standing before him, but for whatever reason, he took me on. He explained that he was unable to pay me any wages, but in return for gassing and washing airplanes and doing general chores around the office, he would pay me in flying lessons. Maybe he was shrewder than I thought.

I fairly leapt with joy. Here was a situation beyond my wildest dreams! All I had to do was convince my parents that this was a superb idea. The stickler was going to be my mother’s great reluctance to commit her son into the hands of an unknown aviator, all of whom in her eyes were irresponsible daredevils. Not until she went herself to the airfield to meet Harry Cranston in person did she and my father reluctantly agree to the summer’s agenda.

And so it happened that the very first takeoff and landing that would initiate a 43-year love affair with aviation and airplanes was made at San Francisco Airport. The little red Ercoupe with no rudder pedals was tucked in between the giant DC-6s and Stratocruisers as we taxied out for that first departure. I was in the left seat. My excitement knew no bounds as we flew those first few lessons, and my confidence soared when Harry confided that I seemed to have a natural aptitude for the air.

We flew when the demands of the business allowed, which was fairly often, as there didn’t seem to be much call for the charter services that were the backbone of Cranston’s air service. (I remember very few other students.) When the occasional charter for the Bonanza came in, he would take me along, load permitting, and let me fly the empty airplane back home.

The summer flew by in a heartbeat, and somehow Harry saw to it that, by the time I returned to school, I had amassed enough hours to take the Private Pilot Flight Test. Since Cranston was also the local FAA (it was then called the CAA) examiner, all he had to do was change hats, but not before making it clear that this was going to be no Santa Claus of a checkride. Perhaps he bent over backwards to be objective, but I have vivid recollections of that check, the first of many I would take over the years. It was one of the toughest I ever flew.

At any rate, I passed; and my first flight as a real pilot with a passenger was from San Francisco Airport. The intrepid adventuress who climbed aboard was none other than my mother, she of the skeptical eye towards daring and reckless aviators. Scarf tightly knotted beneath her chin, she gamely endured the 30 minutes of wind-blown flight, clutching the sides of the seat with her misgivings held carefully in check. How could she refuse such an invitation from her own proud son?

So great was her relief at coming back to earth that she exclaimed with great excitement on the incredible smoothness of the landing. Crestfallen, I was forced to admit that we had not yet touched down. In later years she would fly with me as a passenger in the airliners that I flew, no doubt just as apprehensive as ever, but outwardly calm and serene, never admitting to anything but calm resignation. She delighted for years in telling the story of that first flight, and, knowing what I do now, I wonder if I would have been as brave.

The career began in earnest a few years later, and spanned 43 years by the time it finally finished. It covered nearly 30,000 hours flown in over 40 different aircraft types. In my logbook are nearly 1,000 Atlantic crossings, and 300 of the Pacific; landings in nearly every one of the 50 United States and more than 50 countries. They were made in all types of weather, at every hour around the clock, Category II or CAVOK, it made no difference. The airplane didn’t care; as far as the hardware was concerned they were all the same. All it took to keep the machinery happy was to keep concrete under the wheels and away from everywhere else.

Eventually it came time for the last landing. By incredible coincidence, the airline phase of the career came to rest not only at San Francisco International, but finished on the same runway, 28 Right, probably close to the very same spot where it began 43 years earlier. This time the aircraft was slightly larger, a 747 with a full complement of customers in the back. Between the first takeoff and the last landing lay the memories of an odyssey that I would not trade for all the gold in Fort Knox or all the riches of Croesus. I’m sure there were passengers as nervous and queasy about their aerial journey as my mother on that first trip, but during that 43 year full circle, no one ever received a scratch – not on my airplane! John Marshall
John learned to fly at age 16 at San Francisco International Airport after a childhood of mostly gazing at airplanes and building airplane models. After a brief and forgettable college career, he entered the US Air Force as an Aviation Cadet at age 19, and went through multi-engine pilot training, graduating as a 2nd lieutenant and rated Air Force pilot in 1956. He spent three years as a flight instructor in Texas, then moved on to the Strategic Air Command as a Combat Crewmember in B-52 heavy bombers. He left the Air Force in 1963 to escape the talons of SAC, and with no airline jobs available anywhere, managed to find a corporate job with Aerojet General Corp in Sacramento, CA. In July of the following year he was hired by Pan Am as a flight engineer in Berlin, where he spent eleven very enjoyable years doing the industry’s most satisfying flying and living in the world’s most exciting, exotic, erotic city. He transferred to New York to check out as captain on the B707. He finally checked out in 1978, was made a check pilot the following year and was assigned to White House Press Charters.When the L-1011 came along in 1980, John was assigned as fleet manager for that airplane. He transferred to SFO in 1983 on the B747, and then came the Pacific Route sale to United. The West Coast bases rapidly shrank after that, and he ended up back in New York in 1989. He was based at JFK until the end, and on Dec 3, 1991 flew the last revenue flight to South America, flight 212 to Sao Paulo. The following spring he flew a Hajj out of Jakarta (a whole ‘nother story), and that fall went to work for Korean Airlines as a 747 captain, where he flew until mandatory retirement in 1995. In 1996, he went to work for the FAA in St. Louis, and is still there and still working. He stays current in the Embraer 145 regional jet as part of the job.

“I’m just trying to keep my lunch down”