Blog - Latest News
You are here: Home1 / Article Archive2 / My Adventure3 / Journey to the End of the Earth 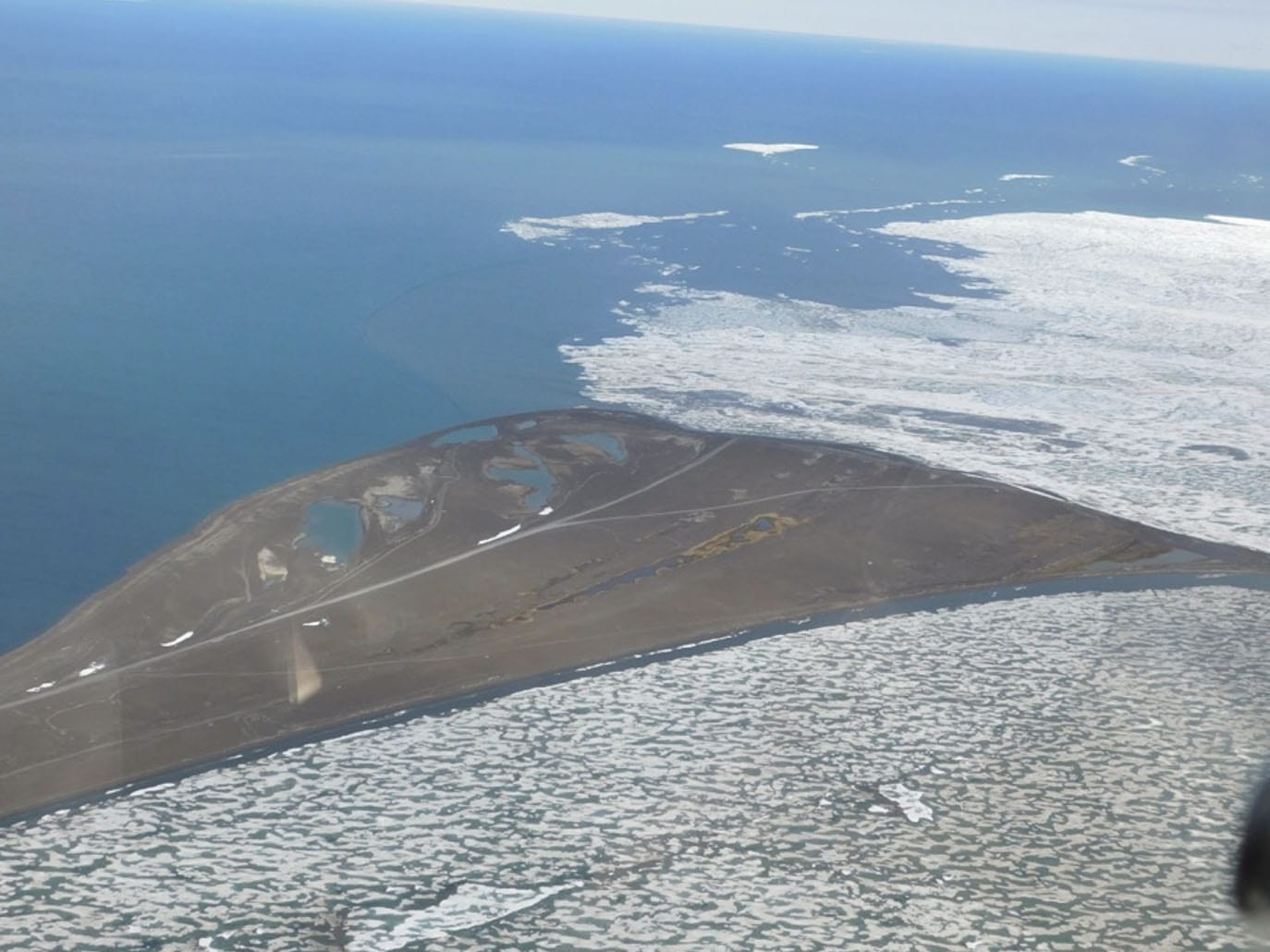 Call it a post-midlife crisis. Call it my bucket list. Call it absurd. Call it expensive. OK, I plead guilty to all of the above. I decided to go anyway.

Four decades ago, I learned to fly in Fairbanks, Alaska. Since then, through job changes, multiple moves, raising kids, lots of distractions, and eventually retirement, I’ve wanted to go back and really explore the far north by air. So I was determined to fly my 1977 Piper Arrow from my home field (EQY) near Charlotte, North Carolina, to the northernmost airfield in the North America—at PABR in Utqiagvik (formerly known as Barrow), Alaska. (Yes, I know there are airstrips on islands located farther north in the Canadian Arctic, but Point Barrow—at 71 degrees, 23.15 minutes north latitude—is the farthest north you can go on the North American continent without crossing ocean waters.) Basically, I decided to keep flying northwest until I ran out of land. This article describes the final legs of that long journey.

The Arrigetch Peaks in the Gates of the Arctic National Park—one of many stunning sights.

It was an epic trip, just to get started. Leaving my home field of EQY on June 21, it took five days, 12 fuel stops, 32 flight hours, two border crossings, and 3600 nautical miles of air travel to get to Fairbanks, my jumping-off point for this final 400 mile journey.

Fairbanks (PAFA) is an amazing, surprisingly busy airport. It supports extensive airline traffic, serves as an alternate for trans-polar flights diverting from fuel stops in Anchorage, and hosts a thriving general aviation population. It has two parallel paved runways (12,000 and 6000 feet), and additionally a water runway for seaplanes and a gravel strip which doubles as a ski strip for winter use. It’s an airport with something for everyone! Looking around the general aviation ramp, my low-wing, retractable Arrow looked very out-of-place in a crowd of high-wing, tundra-tired, and amphibious bush planes.

From Fairbanks, I flew 150 miles northwest to Bettles (PABT), which lies on the Arctic Circle, roughly following the Dalton Highway—a 500 mile dirt and gravel highway from Fairbanks to Deadhorse—the home of the Prudhoe Bay oil field. The highway was originally built as the haul road for the construction of the Trans-Alaska Pipeline, but has now been opened to non-commercial travelers. Bettles has a surprisingly smooth gravel strip, and was my last fuel stop and jumping off point for crossing the Brooks Range and the North Slope to Utqiagvik.

From Bettles, I flew about 70 miles westward along the south flank of the Brooks Range into the Arrigetch Peaks in the central Brooks Range, contained in the Gates of the Arctic National Park. This is without a doubt some of the most spectacular mountain scenery I’ve ever seen. The word “Arrigetch” means “fingers of the outstretched hand” in the Inupiat language, and that describes the peaks very well. They consist of miles and miles of rugged granite peaks, ridges, and spires. They are very remote, off frequently traveled routes, difficult to reach, and seldom seen by anyone. It was one of the most impressive flights I’ve ever made.

The North Slope of Alaska – an immense landscape of tundra and lakes.

After 150 miles of flying over and crossing the Brooks Range, I was still 175 miles south of my destination, over the profoundly isolated and desolate North Slope. The North Slope is roughly 150 by 400 miles, amazingly flat, and consists of seemingly endless tundra, ponds, sloughs, and lakes. In my flight at the end of June, many of the ponds and lakes were still partially frozen. All of this area is permafrost—from a few inches below the surface, the ground never thaws. Virtually no people live in this area—the few villages are tiny and separated by hundreds of miles. The area is host to caribou herds numbering more than half a million animals, grizzly bears, wolves, wolverines, and other mammals, as well as huge numbers of migratory birds. Despite the population of these larger animals, I have heard that, on the North Slope, the weight of mosquitos exceeds the total weight of all other species combined. Looking down at this desolate landscape, it’s easy to believe!

This area is part of the National Petroleum Reserve—Alaska (NPR-A), a 37,000 square mile tract of undisturbed land (roughly the size of the seven New England states). It is estimated to contain 896 million barrels of oil and 61 trillion cubic feet of natural gas.

I was incredibly fortunate in my weather, which couldn’t have been nicer. Light winds, not a cloud in the sky, and virtually unlimited visibility. This is really unusual! When I left for this trip, I figured I had one chance in three of making it all the way to Utqiagvik, let alone in perfect weather! The North Slope is noted for poor weather, and Utqiagvik is one of the cloudiest places on earth—overcast over 50% of the time, generally low stratus and fog. Dense fog occurs 65 days per year, generally in the summer months. The average surface temperature in June is 36 degrees Fahrenheit. At these high latitudes, icing in clouds is likely throughout the year. This is not a likely place for a small plane without provision for flight in icing conditions.

Point Barrow, the end of the road for a US pilot.

Point Barrow, the northernmost point, is a narrow sand spit along the coastline of the Arctic Ocean, and marks the divide between the Chukchi Sea to the west and the Barents Sea to the east. When I visited on June 26, the waters around the point were largely covered in ice.

The settlement at Utqiagvik has been occupied by the Inupiat peoples dating back to at least 500 AD. It was settled by western explorers and whalers in the 1880s, who renamed it Barrow, in honor of Sir John Barrow of the British Admiralty. That name stayed until 2016, when by local referendum, the town changed back to its Inupiat name. Utqiagvik is a community of 4400 full time residents, with gravel streets and a paved 7100 foot runway.

The Wiley Post–Will Rogers Memorial airport commemorates the nearby crash that killed the famous pilot and his equally famous humorist passenger in 1935. A granite monument to them is located at the airport.

On-field flight service stations are a luxury for a lower 48 pilot, but pretty standard for Alaskan aviators. The briefers are very knowledgeable about their areas of responsibility—not just the weather conditions, but also the pilots who fly there and the conditions they are seeing each day. All whom I met seemed happy to invite me in, offer me coffee, discuss all the weather maps and field conditions, and suggest ideas for my planned flights. When I asked about nearby wildlife sightings, it surprised me to have Zak, my briefer, turn to the radio and casually call one of the local charter pilots (who was in the air returning from Cape Lisburne, along the coast to the southwest) to ask if he’d seen any whales that day!

On the ramp at PABR. The flight service station is in the background.

After arriving at Utqiagvik, I was very surprised to find, here at the very northern tip of the continent, an excellent hotel. The Top of the World hotel caters to visitors who fly in on daily Alaska Airlines 737 flights to experience the midnight sun, put a bare toe into the Arctic Ocean, and experience life in this remote location. The rooms are what you’d expect at a nice hotel in the lower 48 states (other than the $350 per night rates!). The only unusual feature is the blackout curtains in the rooms, because the sun is high in the sky 24 hours per day from May 10 to August 2. The hotel also boasts an excellent restaurant, Niġġivikput, which means “Our Place To Eat” in Inupiat.

Utqiagvik is home to the Inupiat Heritage Center, which documents and showcases the Inupiat culture, history, and language, and also the wildlife of this fascinating area.

No trip to Utquagvik would be complete without a picture of the midnight sun above the crossed whale ribs erected to commemorate the whaling history of this remote location! I didn’t have to hurry in getting this picture—the sun wasn’t going to set again for another five weeks!

So, after journey of a little more than 4000 nautical miles, my goal of flying to the end of the earth was complete. I’d do it again in a heartbeat! Duncan Witte
Duncan Witte is a commercial/instrument-rated pilot, who first learned to fly in Alaska in the 1970s. Then, with fewer than 100 hours, life intervened and he took a 30+ year hiatus, before starting to fly again in 2011. He now has logged over 1900 hours. Prior to the Covid-19 pandemic, he was very active in Angel Flight, and looks forward to being able to fly missions again soon. Now based in Charlotte, NC, Duncan is particularly interested in exploring new places by air, and has visited over 350 airports, in 44 states, provinces, and territories in the U.S. and Canada.

An engineering approach to the impossible turn
Scroll to top