Blog - Latest News
You are here: Home1 / Article Archive2 / I was there3 / The strangest 45 minutes in my logbook 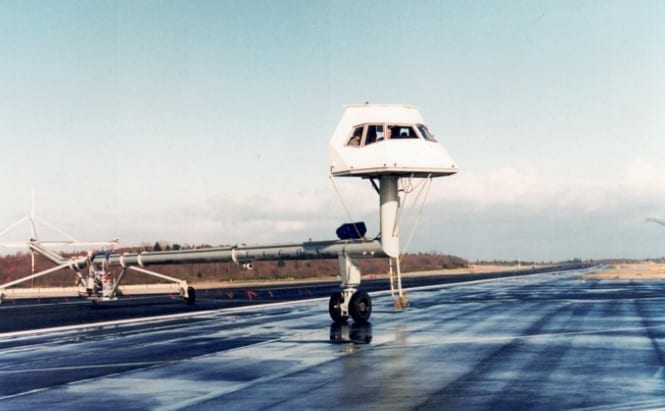 While searching my old photo archives, I stumbled upon these images of an unusual device in which I logged about 45 minutes. Thankfully it didn’t fly at all but it did taxi quite nicely. The machinery was created by The Boeing Company and was used in early 1994 to simulate the geometry of the new (at the time) B-777. I recollect that my mission on this rig was in February 1994. There was a lot of anticipation and excitement regarding the real Boeing triple-seven, which actually rolled out in April 1994, and flew its first flight June 12, 1994.

I was a United Airlines “project pilot” at the time. A small team from UAL, plus Boeing staff, were supporting this particular day’s mission. The rig had an elegant acronym, LAGOS, which expanded to “Large Airplane Ground Operations Simulator.” It was built to test the wheel geometry of the B-777-300, which was the next-in-line production effort planned for 1995. The -300 would be a lengthier version of the airplane and although United was a 777 launch customer, we bought only the -200 (in that era).

In the case of the taxi tests, Boeing and the airline customers had some concerns about the wheel geometry and the very long wheelbase of the -200 and -300 airplanes. This rig was fabricated at Paine Field (PAE) with a diesel hybrid hydraulic drive for locomotion with forward and reverse action. The steering resembled the actual airplane’s nosewheel response. The cockpit cab was arranged with realistic pilot seating and window views of the real plane. Behind the pilot crew were benches where observers or techs could strap in and watch.

The objective for us was to follow a truck around a pre-determined course laid out on various taxiways. We also maneuvered on the big runway at PAE (the truck got ATC clearances for us). Ship’s cameras were mounted on the LT/RT “stabilizer” plus one behind the nosewheel. These three views would provide a selectable instrument panel screen-view of left and right main gear, plus the nosewheel.

Author is far left in the picture with Joe MacDonald, Steve Forte, Gordon Mackenzie, John Cashman, and others.

Among the questions: Could line pilots maneuver the B-777 at taxiway intersections without cameras? Were the camera-video views necessary? Could the airplane do a 180-degree turn on a 150 ft.-wide runway?

For United’s part, we nixed the idea of cameras on the -200 airplane. Others said yes, so the cameras became common on -300 versions ordered by other airlines. As far as the 180-degree turn on a runway, the answer was no, unless there was a reverse segment at the 90-degree mark. This was easily done with diesel hybrid reversable motors and cameras. Our engineering rep said that UAL would never consider the 180 maneuver by reversing real Pratt & Whitney 4084 engines so we nixed that one. Apparently in some parts of the world, other customers had interest in that possibility given that certain airports were lacking parallel taxiways.

After the ride the project chief test pilot, John Cashman, took us to lunch in nearby Mukilteo and we debriefed. Everyone was “high” on anticipation for the rollout and first flight of the real plane. In my case, I got to fly the triple-seven in October 1994 (one leg, Moses Lake to BFI). Later, as part of an initial cadre, I got a provisional rating in the “experimental” B-777 (simulator, Dec 1994). United participated in the ETOPS (overwater long-legs) certification in spring 1995, with the first revenue flight June 7, 1995. John Meyers
John soloed in a J-3 Cub at age 16 in Newark, Ohio, attended Ohio State in 1961, and managed to begin an airline career at United in 1966. He maintained a connection to small airplanes, both legacy and experimental types, owning some interesting types along the way. Examples include: Harmon Rocket II, Citabria, RV-6, Maule, and now his “old-man’s airplane,” a 1963 Cessna 150 TD (taildragger).

Student pilot nerves and the fear of flying
Scroll to top