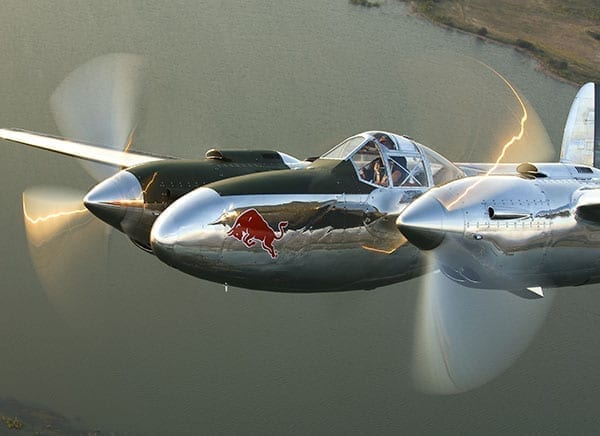 The view: Over Hubbard Creek Lake northwest of Breckenridge, Texas

The memory: This Lockheed P-38L Lightning now is part of the “Flying Bulls” collection under the very wide Salzburg, Austria-based Red Bull corporate umbrella. It has had a long and highly public career that spans some three-quarters of a century. Built in 1944 and given serial number 44-53254, it was purchased surplus for $1,250 from the War Department by the Lilee Products Co. in Chicago, IL, during April of 1946. Civil registered NX25Y (later, N25Y), it would participate in a number of national air races and would be flown in uncountable airshows, particularly after falling under the purview of Marvin Lee “Lefty” Gardner (one of the three founding fathers of the Confederate Air Force based in Harlington, TX) in 1964.

I was privileged to serve as a photographer throughout the entire “Flying Bulls” P-38L restoration process following an accident in MS in 2001. Work got underway in 2005 when N25Y was partially disassembled and loaded on a flatbed trailer and trucked from San Antonio to Breckenridge, TX, where Ezell Aviation was tasked with making the airplane flightworthy. For the following three years, almost every part of the P-38 was either completely rebuilt or new parts were manufactured from scratch. When the restoration was finished, the polished aluminum Red Bull P-38L was arguably the most beautiful Lightning in the world. With noted pilot Steve Hinton at the controls, it made its first post-rebuild flight on June 2, 2008. Having first photographed N25Y back in the mid-1960s and then throughout the 1970s when Bill Crump and I served as chief photographers for the CAF, my history with the aircraft has been a long one. It continues to this day through my friendship with Sigi Angerer, the retired director of the “Flying Bulls” collection.

I will end this little summary by saying that one of the truly memorable experiences of my life followed one of the several air-to-air sessions that I had with N25Y. After landing one afternoon, I heard Nelson Ezell calling for me from the P-38. Running over from my photo ship, I looked up to see Nelson signaling for me to climb up the small ladder and get on board. I could not believe my ears—or my eyes! So with cameras in hand, up the ladder I went and soon found myself squeezed in behind Nelson while sitting on the main wing spar with a safety belt over my lap. The 20-minute flight meant more to me than Nelson will ever know—as never in my wildest dreams when watching Lefty go through his stunning routine during the annual CAF shows in Harlingen could I have imagined that someday I would be flying in that same P-38. Once in a great while, miracles do happen…

Several months after first flight and following a lengthy series of test flights, N25Y was flown to Pensacola, FL, where it was loaded aboard a small freighter and transported to Europe. It was then flown to its permanent home in Hangar 7 of the Flying Bulls museum in Salzburg, Austria. It remains there to this day, a crown jewel among the many jewels owned by Red Bull GmbH.

Want to share your “Friday Photo?” Send your photo and description (using the format above) to: [email protected]urnal.com

On the shoulders of giants

Flying with the famous and infamous
Scroll to top