Blog - Latest News
You are here: Home1 / Article Archive2 / I was there3 / First solo on my 16th birthday (and why aviation is amazing) 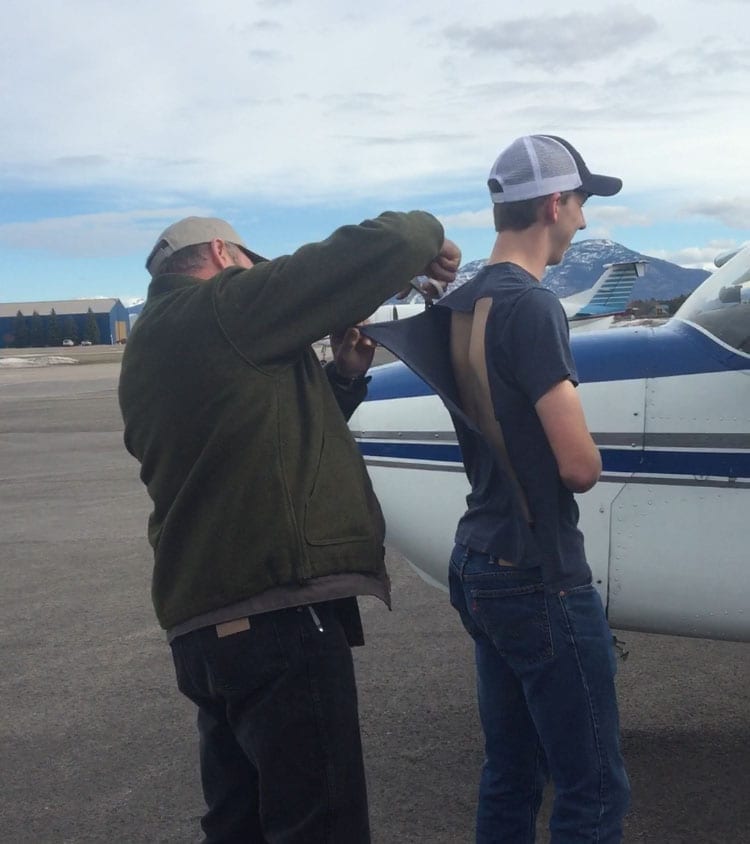 I would just like to start off by saying that I am only writing about my first solo purely to help me remember. Everyone’s first solo is unique and should be that way; don’t let my story affect how yours went.

I woke up not feeling any older, followed by rolling over and quickly checking the METAR on ForeFlight. Good to go – awesome. After a homemade waffle breakfast I shot my instructor a text just to confirm he was still good flying with a quartering crosswind of nine knots.

I got to the airport early, because why not, airplanes are fun to watch and I enjoy talking to my co-workers about the newest developments at the airport. The plane was still in the hangar. I completed the preflight in the hangar, got the times noted, and headsets connected. Once we rolled the plane under the overcast sky, I pulled the sump in the engine compartment, and it was time to go.

Once in the plane, it was business as usual. Checklist complete, I turned the magnetos to start – klunk! “Great start,” I told myself as I shot my instructor a glance.

“Try it again,” he said. I turned the mags to start again – klunk!

“You ever hand propped before?”

Nothing like learning how to hand prop on the day of your first solo. It went on the second throw from my instructor. That was the hardest I’ve ever held those brakes; my knees were shaking. The rest of the run-up and taxi was uneventful.

Coming down final on the first touch and go, the windsock was showing a respectable crosswind.

“Direction with rudders, drift with aileron,” my instructor repeated.

This was for the third one, the crosswind wasn’t as bad, and it was a pretty good landing. As I was slapping the flaps up and pushing the carb heat in to push the power in and roar down the runway again (roar is a light term in a 172), my instructor caught me off guard by reporting to the tower it would be a full stop. “Well I think I know where this is heading,” I thought.

Entering the FBO ramp, he told me just to pull off to the side. I pulled the power to idle as he started pulling out his headset. I’ll never ever forget him stepping out of the plane, turning around, giving me a smirk, hitting me on the shoulder, and simply stating “enjoy yourself.” I’m smiling just writing that right now.

I slowly turned the plane to face the same direction my instructor was walking. “Well it’s my time,” I thought. I called ground and started taxiing to the runway. Looking back, I realized I forgot to run the takeoff checklist – whoops. Holding short I gave myself a little pep talk. Somehow I wasn’t nervous or scared or anything; it just felt normal. Lining up I pushed the power to full, heels to the floor, checked the gauges, and said what my instructor always says: “keep centerline with the rudders.” Great tailwheel pilot he is.

Holy cow! The loss of the instructor definitely helps the takeoff roll and climbout. I knew it would have an effect but I wasn’t expecting that much of a change. Due to the climb rate, I hit 500 ft AGL and was in the left turn for crosswind. Hitting abeam the 1000 ft. markers I did the CGUMPS checklist: carb heat, gas, undercarriage, mixture, prop, power, seatbelts. I slowed into the white arc and selected ten degrees of flaps. Turning final, I was high but with a 10,000 ft. runway it doesn’t matter a whole lot. I was a little fast but was fine with that because of the runway length available and the crosswind. As soon as I crossed the fence I said, “directional control with rudder, drift with aileron” all the way until touchdown. Thank God for those instructor phrases that they say religiously.

It was a pretty good landing.

Coming down final the second time I repeated the mantra, floated it a little and it wasn’t very steady. Definitely not my best landing but it would do. Carb heat cold, flaps up, power full for one last time. On final the third time, it was looking good – crosswind was still there but not as bad. And ah man, I’m proud of this one, it was perfect. The left main gear touched down first, followed by the right and then the nose wheel, perfect crosswind technique right on centerline. And it was super smooth. That is now my template for a good landing.

Turing right on B4 I pulled the flaps up, pushed the carb heat in, and turned the landing light off. Pulling onto the apron I glanced at my instructor and parents, received a big thumbs up from my instructor and kept taxiing to the rental spot. I shut the plane down and quickly got the numbers and my headset put away so I wouldn’t have to deal with it later. We got a variety of pictures with different people in front N6843H.

It feels so good!

It was time for the tradition. He whipped out his scissors and it was my cue to put my back to him. He took a big chunk! All the way to the shoulder blades. Turning around I found a Gulfstream GV taxiing in (this will come into play later).

Inside the FBO I was met by my grandparents. We spent a few minutes together talking as a family and with my instructor. Then I went to the counter to finish paperwork as the Gulfstream crew was walking in. Someone mentioned it being my birthday and one of the pilots congratulated me on turning 16. Then he must have noticed my headset or something and promptly cut me off: “First solo!?”

“Congratulations, I remember my first one and will never forget it.”

Gosh why is aviation so great! Nothing else compares to it. Later on, I was talking to my parents, still in the FBO, and the same pilot approached me.

“Hey, if you want to go into that,” pointing at the Gulfstream, “let me know. I’ll have to make a call but I can.”

I wanted to but he seemed to be in a rush and I work at the FBO and I’ve already been in a ton of cockpits, including a lot of Gulfstreams. I explained this to him and thanked him for the amazing offer. To the crew of N772BE, I would love to take some more time to talk to you guys!

One of my co-workers, who is also a pilot, came up to me and shook my hand. It wasn’t something that people would seem to be a amazing gesture but to me it meant a lot. I respect him a lot and it meant a ton to me to be “admitted to the club.”

And that is the story of my first solo and how amazing aviation is.

Seven things I know about flying in Illinois

Friday Photo: Badlands off the wingtip
Scroll to top