Blog - Latest News
You are here: Home1 / Article Archive2 / I was there3 / A ride to remember 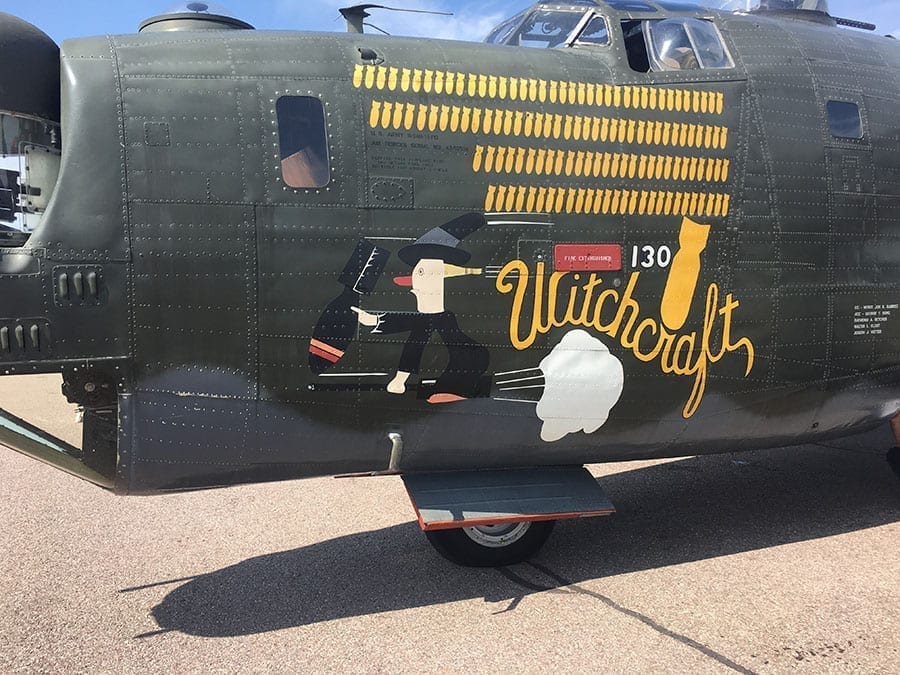 I’ve been wanting to write about my ride in the Collings Foundation B-24 for some time now. Sadly, due to the events that occurred on October 2, 2019, with the loss of the B-17 “Nine-O-Nine” and seven fatalities, I have decided now is the time to write about my life-changing ride.

I work at the local international airport as a FBO assistant. After work, I was walking out the door and got distracted by the poster of the Collings Foundation “Wings of Freedom Tour.” I took a picture with my cell phone to save for later. On the drive home, I quickly remembered that Michael Mainiero, a 20-some-year old dude that I followed on Instagram was a part of the Collings Foundation team. I had been really inspired by his young age and his love of aviation, so I quickly messaged him. I doubted he would even respond due to the fact he has tens of thousands of followers, along with the fact that he had absolutely no idea who I was… but he did, and stated he was flying the B-25 that weekend. I was elated.

Seeing these airplanes up close is a memorable experience.

The community of general aviation never fails to blow me away. I had met a man at a local fly-in about two weeks before the bombers were supposed to come to town. I wasn’t able to talk too much with him. Heck, I forget his name. But, he is a major contributor to this story—more on that later.

Somehow, I managed to get the weekend off that they were in town, totally by chance, especially since it was 4th of July week, my work’s busiest time of the year. I told my parents that I was fully expecting to spend just about as much time as I could at the airport, which is nothing new for them to hear from me.

Upon arrival at the event, I quickly spotted Michael, waited for a good time when he was available, and quickly walked up to introduce myself. He seemed happy to meet me, but not near as happy as I was to meet him. He invited me to go out to the B-25 with him, and I promptly accepted. I ended up helping them move the bomber. Working at an FBO, I have plenty of experience moving aircraft.

Remember that guy I mentioned earlier? I quickly ran into him at the event. We made some small talk, and then out of the blue he said, “Hey, I have some empty seats on the B-24 ride if you want to come; it’s just for my friends.” Due to weather, it got delayed until the following day. I don’t think I could wipe the smile off my face all night. The next morning I woke up early and got to the airport ASAP.

The B-24 was already in the air on a ride, so we got called over for a safety briefing before it returned. It was very thorough, and I was more than ready to board the beast. We watched it land, taxi in, and shut off the starboard engines, allowing the group of people to get off, and for us to get on. We ducked under the bomb bay, and then clambered through the skinny walk way in the bomb bay, and I shimmied my way to the back where I was sitting for takeoff. My seat was in the row of four above the bomb bay. There was an older man on my left, and then a younger dad and his son on my right, and then about eight feet in front of us, in the low part of the tail, were three more men. I had spoken to the dad and his son before we had boarded, especially because the dad was interested in taking flight lessons.

I remember hearing those radials rumble to life as we started taxiing to the runway. I was so blessed to be given this opportunity at my home airport, where I soloed, where I worked, and the first 9,007 feet of pavement I have ever loved. Underneath, there was a small gap in the aircraft due to the bomb bay and I watched the yellow taxiway line all the way to the runway—until I saw the distinct two solid yellow bars followed by the two dashed rows, outlined in black, and I realized what I was about to do. I reported to the dad that we were about to take off through the very scientific method of my spinning my finger in the air like an umpire. The pilots lined us up and started raising the power. I can’t put into words the sound of the radials at takeoff; you could hear the power they were generating.

“Mmeeerriiccaaaa,” the dad next to me yelled as we started down the runway.

It brought a smirk to us all. Truly though, the noise did make me want to start waving an American flag around. The bomber started rotating and struggled to get off the ground with just people in it, let alone bombs. I can’t imagine what it would be like on an actual mission to get that mass of a plane off the ground. We started climbing and pulled the gear up and then the pilots put us in a right hand turn to the south. I will never forget seeing the runway disappear behind us through the waist gun windows. Honestly, I got a little emotional thinking about those thousands of men that did this before us, except they did it for real. They weren’t carrying fake bombs in the bay, they were carrying weapons of war. They weren’t taking a ride, they were going to work… for us. Then I realized that most of them were only two to four years older than me at the time.

There was a tug on my pants! Don’t worry though—it turned out to just be the flight mechanic telling us we could move about the airplane. I quickly unbuckled and started to go down through the bomb bay to get to the cockpit. As I was getting up, I glanced to my left to see the older man with the largest smile I have seen since my solo. He was having the time of his life, and it was so cool to see. I think I almost ran across the bomb bay to get to the cockpit and holy cow, what an epic-looking cockpit. I paused and took it all in for a few minutes. Then I went under the cockpit to the bombardier position, and it turns out the nosewheel is practically a part of that position. Then I returned to the back to play with the movable machine guns. Looking out one of the windows from a certain angle, all I could see was water, and I quickly thought of Louis Zamperini and his crew, as well as all that they endured in the Pacific.

As soon as I knew we were headed back in the direction of the airport, I returned to the cockpit. I wasn’t missing a seat up front! I watched the pilots fly a locked-in practice ILS all the way down—I was thoroughly impressed. The pilot kissed the runway, one of the smoothest I have ever experienced. Most definitely smoother than all the airliners I’ve been on. Taxiing back in, you could smell the oil.

“Dad, what’s that smell?” the son questioned next to me.

Not only did it smell of oil; that plane was coated in it—inside and out.

Thankfully, our flight was the last one for a while so I got to watch the pilots shut it down, as well as talk to them for a few minutes. I made sure I thanked them for a life-changing experience. It was 4th of July weekend, no better time to remember how great our country is, especially in the aviation department. Every one of the members of the foundation just loved aviation, just like me and a lot of others, which made for great conversations.

That weekend is one I will always remember, whether it be the Collings Foundation folks treating us like family, my talks with Michael, watching a P-51 and a P-40 flying formation among other formation flights, or riding in a piece of history. I highly encourage you to take a ride in a warbird if you can. It was an incredible experience. It changes your outlook on the war and aviation, as well as bringing a large amount of joy.

Nodding off at 10 feet above the waves