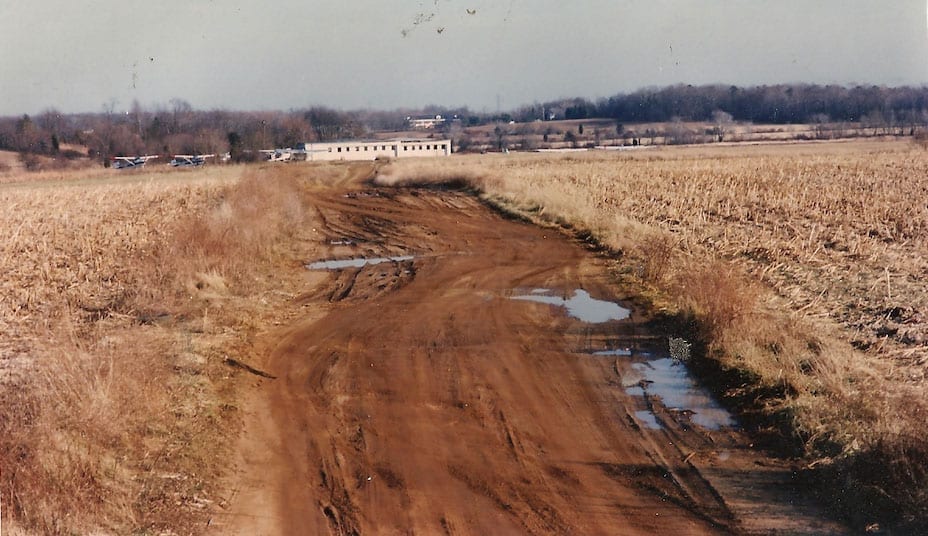 I went to the airport when I was 16 and never came home again. That was the joke in my family. Between my sophomore and junior years of high school, while I was away working at a summer camp in the Poconos, my parents moved.

It’s not the beginning of a bad joke; they actually told me they were going to do it ahead of time and, at the end of the summer, brought me to our new house in Colts Neck, New Jersey. I was a bit devastated by leaving my entire world 15 miles up the road and starting a new school. Friends, teachers, teams, were all gone.

A couple of days after settling into the new home, it felt rock bottom. I had the end-of-summer blues and the future looked bleak. To top it off, on the first day of school a couple of kids tried to shake me down for my lunch money and I wound up in a fight, which of course I lost, and got dragged to the principal’s office. I had enough juice in my old school that neither of these things would’ve happened.

My mother went to ceramics with a friend whose husband owned an aircraft maintenance shop. I was taken to meet him at the local airport in Colts Neck, which was a little over a mile from my new home. We drove down the dirt access road between cornfields, and over a slight rise, a magical world appeared. There were grass runways and airplanes. An airplane took off. The scene was complete all at once and etched into my memory.

A new world awaits at the end of that road.

The airport was a magnificent place. Stripped cornstalks swayed in the late-summer fields, runways of dirt and grass cut from them, at the intersection of the runways in the corner of a cornfield swiveled a ragged old, yellow wind T made from a discarded drone, two concrete hangars with gray doors weathered almost white sat on a slight rise, and a concrete hangar-office combination was set dead-center of the airport. And there were the airplanes, unknown, full of infinite possibilities. There seemed no end to the adventures this airport whispered to the 16-year-old me. It was the Hundred Acre Wood come to life. A thousand adventures would begin and end there. I was drunk imagining it all.

I looked into the windows of every airplane, stared at the dials, knobs and levers. I admired their lines and tried to connect names to the shapes.

“Why is that one called a Taylorcraft?”

“Because a guy named C.G. Taylor built it.”

“How about the Piper?”

That seemed simple, yet pretty unspectacular. I expected airplanes to shout excitement and mystery at every turn, including their names.

After a brief, “want a job,” my new boss gave me a ride in a yellow and white Cessna 150. It was the first time I’d ever been in an airplane of any size. This one had two seats. This was one of the magic machines.

The instruments and gauges twitched and hummed with the flip of a switch. The boss hollered “Clear!” through the open side window and I jumped a mile. The engine rumbled to life and gave the machine a little dog-wag as the prop ticked over. He wasn’t an explainer so I just watched from the right seat while he taxied, then ran the engine up and checked some stuff. With a lot of looking around, we pulled out onto the strip and in went full power. I watched out front, then my attention fixed on the little main wheel outside of my side window as it rolled through the grass.

The wheel lifted out of the grass and I could see the shadow of the airplane tearing across the tops of the cornfield, getting smaller as we rose. It was as you would imagine watching an angel rise. Funny, I don’t remember much of the flight; I just remember melting into the sky, knowing I was transcending all that was past and now beginning to live my future.

From then on, I went to the airport after school every day, looked at every airplane, walked the airport grounds, and asked a million or more questions. On Saturday and Sunday I worked in the maintenance shop and after a couple of weekends I’d earned a flight of my own. I had no money, zilch. I just worked for flying time. The flight instructors were young and could see in my eyes the puppy-like desperation to fly. They took pity and a great young guy named Steve Reynolds offered to give me my first lesson. I owed him a car wash, but I knew he was just paying it back a bit, helping out the airport kid.

Just a circle on a map, but an important place all the same. (Image from Paul Freeman)

Flight instruction was not very formal. Someone may have suggested I buy a Kershner manual, but for five bucks they may as well have suggested I buy an airplane. I didn’t have five bucks, and if I did, I would have bought flying time with it. So, I asked questions and the instructors and everybody else would sit and talk to me about flying, hour after hour.

And then I was flying. Steve was in the right seat showing me where all of the levers and knobs needed to be. He took off and at 300 feet I started to fly.

“Don’t stare at the instruments. Look outside for the horizon. Hold it at this angle for 70.

“Relax your grip. Keep the nose there for straight-and-level. Now, like we talked about, coordinate aileron, rudder and elevator for the turn.

“The nose is dropping, a little back pressure. Whoa, just a little, just ease it back to the horizon.

“Can you see okay? Maybe next time you can use a cushion.”

Utter embarrassment. At 16, I was only 5’2″. Luckily, I had five more years of growing left in me, but on that day I was a skinny little kid flying the airplane.

All too soon, we started a descent for the airport. I stayed on the controls for the landing. It was very important in my mind to be trusted enough to touch the controls while landing. Now, it seems similar to years earlier sitting on my dad’s lap thinking I was driving the car. I taxied to the tie-down area, and with a lot of coaching, a lot of power and a lot of brakes the wheels finally settled into the worn spots in the grass where they normally rested.

I was in a fog. Steve was debriefing, using his hand as an airplane as all aviators do, but stopped mid-sentence: “You can’t hear a word I’m saying.”

“That’s okay. We’ll get it later when the rest of you comes back to earth. Give me your logbook.”

Steve grabbed one from the showcase. “Got a buck-and-half?”

“Well, when you get it throw it in the cash box.”

My father picked me up to go home for dinner. I wasn’t old enough to drive, yet.

“How was your flight?”

I was in a cherry-pop, post-coital haze. Not that I had any idea what that was at the time. I managed to give him the details on the short drive home, but I couldn’t actually focus. My father gave what would become a familiar response to my flying exploits. A shake of the head and, “You’re nuts.”

That night, I couldn’t anchor into my old world. I carefully printed my name, address, and phone number into the appropriate spaces on the first page of my logbook, and for the hundredth time reread the entry of my flight. A logbook with my name, a log of my flights, more magic. I had a profound feeling of destiny with that book in my hand, a little embarrassed by the kid-scrawl that I didn’t realize I would never outgrow.

I didn’t have fantasies of flying fighter planes or big jets, I just wanted to fly the little airplanes at the little airport, surrounded by grass and cornfields. Being there, flying there, was a tactile experience. All of your senses were involved. I wanted that piece of aviation that was an integral part of the history of flight. Wood and fabric airplanes on a grass strip reached all the way back to aviation’s infancy. I just wanted to absorb all of that into my soul. The only fantasy I had was living my life in the present and dreaming about the next day. I couldn’t have been happier.

From the archives: Richard Collins goes behind the scenes at Center
Scroll to top