Blog - Latest News
You are here: Home1 / Article Archive2 / I was there3 / Near miss with a BUFF

Bob Button wrote Neil Armstrong Was My Co-Pilot, which is a great article about a great pilot and astronaut. Actually, author Bob Button and Jack Riley of the NASA Houston Astronaut Public Affairs Office and I as an aerospace engineer with NASA Houston Landing and Recovery Division were partners in a 1957 Champion 7EC (N7405B), registered as The Gemini Flying Club, and featured in the following article.

A cross country in a Champ with a 45 mph headwind… Why not?

On November 30, 1965, when my wife Jean and I lived inLaPorte, Texas, and I was an aerospace engineer at NASA Houston, I got my Private Pilot’s license in a N7405B, which had a 90 hp engine, fixed-pitch prop with an electrical system but no radio. Jean was my first passenger on that day.

We decided to fly down in the Champ to visit Jean’s folks in the lower Rio Grande Valley of Texas for Christmas. On December 23, 1965, we flew from La Porte to Aransas, Texas, to refuel. It was three hours and 15 minutes en route. We then followed Highway 77 south past Corpus Christi with a 45 mph headwind on our nose, giving us a groundspeed of around 45 mph! Everybody, including the 18-wheelers, were passing us on Highway 77. We finally arrived at the duster strip in Raymondville, Texas, near Jean’s home in Lyford. This was another three hours, for a total time of six hours and 15 minutes – which we could have driven just as fast!

On December 27, we left Raymondville to fly back to our home at La Porte. We left Raymondville and climbed to our cruising altitude of 2900 feet above the ground. We were proceeding northbound at 2900 feet, and the Gulf of Mexico was off our right wing, and Highway 77 was off our left wing. Jean and I were all bundled up because N7405B didn’t have a heater. As we approached Corpus Christi Naval Air Station and Kingsville Naval Air Station, I told Jean to keep a watch for Navy traffic from those training bases.

I was concentrating ahead, when my peripheral vision caught something to the left and crossing below us. I looked to the right and below. I shouted to Jean, “Look at that!” and pointed down and to the right.

The BUFF – an intimidating sight.

The BUFF was banking to the north, all eight turbojet engines issuing black smoke. What a monster to see up close, with its wingspan of 185 feet, seen from our single-engine 2-place airplane of 32 feet wingspan and 90 hp!

My logbook shows 1 hour 50 minutes to Aransas to refuel, and 2 hours 30 minutes to LaPorte. Four hours 20 minutes returning sure as heck beat the 6 hours 5 minutes coming down. But, as all pilots know, your aircraft groundspeed is true airspeed minus a headwind, or plus a tailwind.

This was the first of our many long cross-country flights, and with that B-52, it was one to be remembered.

[Editor’s Note: If you’re unfamiliar with the acronym BUFF, Google it.] 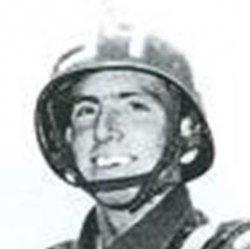 How to unload a Boeing – by hand