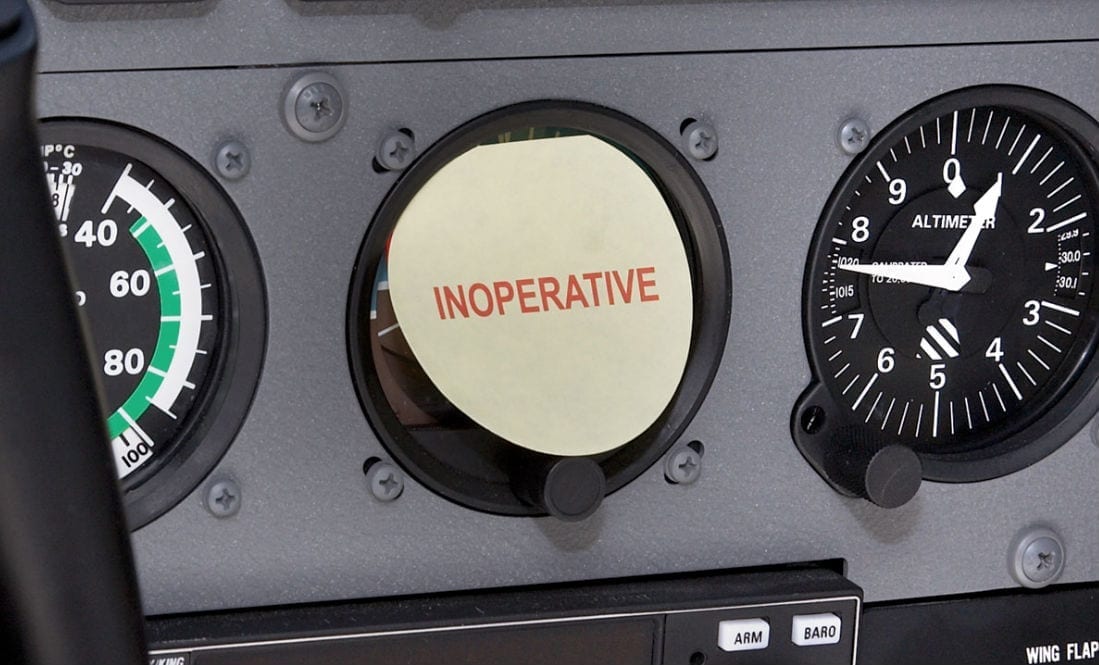 A recent legal interpretation by the FAA’s Office of Chief Counsel (dated June 13, 2018) addresses the rule on operating an aircraft with any inoperative instruments or equipment, FAR 91.213. It gives us an opportunity to review this sometimes complex rule that has bedeviled many general aviation pilots and owners for years.

The general prohibition of the rule is simple but strict: “No person may take off an aircraft with [any] inoperative instruments or equipment installed.” Rather, what is complex is the interpretation of one of the two exceptions to the rule, the one which tries to provide relief to most of general aviation. As we will see, the rule and its exceptions are not intuitive. It applies regardless of whether the instrument or piece of equipment is reasonably necessary for the intended flight.

MELs are great, but pretty rare for GA airplanes.

Before getting to this recent FAA interpretation we need to look at these long-standing exceptions. Of the two exceptions that provide relief to this strict prohibition, the first exception is for approved minimum equipment lists (MELs) that exist for airliners, commuters, air taxi operators, and the higher end of general aviation aircraft. A takeoff with an inoperative instrument or piece of equipment is allowed if expressly permitted by the aircraft’s individualized MEL. MELs have not been obtained for the overwhelming number of general aviation aircraft because of the administrative burden in applying for and obtaining one, and the FAA’s limited capacity in handling a large number of such applications.

Rather, most of general aviation tries to take advantage of the Subsection (d) exception that, as we will see, could be complex, but in its over-simplified form allows for the deactivation or removal of certain inoperative instruments or pieces of equipment, and requires the placarding of the item and/or its cockpit control as “inoperative.” Deactivation may mean a process as simple as the pilot pulling a circuit breaker to the open or off position or as complex as a maintenance task requiring a certificated and appropriately rated maintenance person to perform and record the deactivation. A pilot deactivating or removing an instrument or piece of equipment must record it in the aircraft logbook.

Now to the interpretation. A very important part of this exception is that FAR 91.405 requires the aircraft owner or operator to have placarded item “repaired, replaced, removed, or inspected at the next required inspection,” which brings us to the recent FAA interpretation that prompts this column.

May an aircraft utilizing this placarding exception be operated indefinitely, year after year, under that exemption? Looking again to FAR 91.405, it provides that the aircraft owner or operator must have the placarded item “repaired, replaced, removed, or inspected at the next required inspection.” The FAA interpretation now clarifies an ambiguity in the rule: If the inoperative instrument or item of equipment is not repaired, replaced, or removed at the next required inspection, the inoperative item must be inspected again, i.e. reevaluated, at that inspection to ensure that the discrepancy will not have an adverse effect on the safe operation of the aircraft. If the item passes inspection each time, the placarding exception may be continued indefinitely. The interpretation tells us that there are no time limits on the repair or replacement of inoperative instruments and equipment.

Much of the complexity of the Subsection (d), regrettably necessary, is due to determining to which aircraft and which operations the exception applies. Only aircraft meeting these technical descriptions qualify for this exception. It requires a sometimes “brain twisting” study of FAR 91.213. That is not easy to do. First, what is complex for typical general aviation pilots and owners is that the inoperative instrument or equipment must not be (i) part of the VFR-day type certification instruments and equipment prescribed in the applicable airworthiness regulations under which the aircraft was type certificated (not typically seen by the owner or pilot), (ii) indicated as required on the aircraft’s equipment list, or on the Kinds of Operations Equipment List for the kind of operation being conducted, (iii) required by Section 91.205 or any other rule of Part 91 for the specific kind of flight operation being conducted, or (iv) required to be operational by an airworthiness directive.

How long can you keep that instrument placarded?

But otherwise, it applies to “rotorcraft, non-turbine-powered airplane, glider, lighter-than-air aircraft, powered parachute, or weight-shift-control aircraft, for which a master minimum equipment list has not been developed.” And even if a Master Minimum Equipment List has been developed, it is available for “small rotorcraft, nonturbine-powered small airplane, glider, and lighter-than-air aircraft.” These descriptions comprise the numerically larger segment of general aviation. As a reminder, small aircraft are defined as aircraft of 12,500 pounds or less, maximum certificated takeoff weight.

I earlier mentioned that the rule and its exceptions are not intuitive and apply regardless of whether the instrument or equipment is reasonably required for the flight intended. Here is an old enforcement case, admittedly extreme, that illustrates my point. A charter operator with a single 20-year-old airplane, single pilot operation, was fined $5,000 for operating his Piper Cherokee with one of its two glideslope indicators placarded “inoperative.” Efforts to repair the intermittent glideslope were frustrated because it worked on the bench. The other glideslope was working fine. In an effort at compliance, he placarded the relevant nav receiver “GS INOP.”

It is ironic that his effort to comply with the regulation is what got him in trouble. An FAA inspector, in the course of a ramp inspection, looked into the cockpit and saw the placard. The inspector took the position that the placarding exception does not apply to charter operations. Enforcement followed. The operator tried to defend himself by explaining that his operations specifications, imposed on him by the FAA, prohibited him from operating IFR in his charter operation. The island airport to which the operator routinely flew passengers didn’t even have an ILS. The working glideslope was useless. The second glideslope, working or not, would be equally useless.

An appeal to the then acting FAA Administrator failed. The Administrator specifically held that the margin of safety was reduced. Reasonable? As for an appropriate penalty, the Administrator felt that even though the fine amounted to 100 percent of the net revenues from charter operations for the year, the amount of the penalty was appropriate. Perhaps technically correct but did the punishment fit the offense? So much for reasonableness!

I am confident that the result would be different today under FAA’s new compliance philosophy that I explained in my June column, with thanks to the FAA. However, the bad news is that even though the FAA has adopted this new Compliance Philosophy, FAA enforcement of the laws and regulations is still alive and well and subject to the discretion of the particular inspector in many cases. And the cycle of “gentler” versus “strict” could cycle back to strict.

In any event, a good faith effort to meet the requirements of this complex rule, and a common sense companion emphasis on safety, should stand a pilot and owner in good stead.

For want of a nail…
Scroll to top