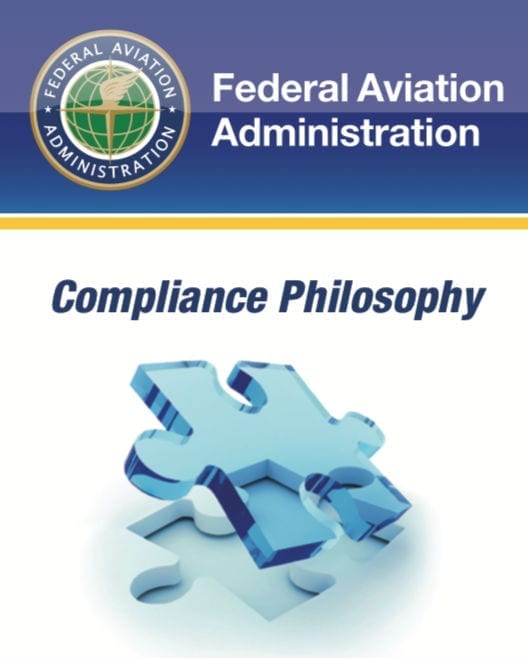 Over many years we have represented pilots, mechanics, aviation companies, and other aviation professionals faced with enforcement by the Federal Aviation Administration of its regulations governing aviation activities. Most usually, the FAA has been seeking to ground the airman or company, or to impose heavy fines. What has been noticeable over the span of these years is that there is a recurring cycle of strict versus more lenient enforcement.

The good news is that the FAA is currently operating under a new, so-called “Compliance Philosophy,” showing a kinder and gentler treatment of those charged with potential violations of the Federal Aviation Regulations and other aviation laws. It is good news to see the FAA handle the more minor infractions with a productive dialog and other tailored remedial measures aimed at improving aviation safety with less emphasis on punishment. The FAA well deserves the thanks of the aviation community for this more enlightened approach.

However, the bad news is that even though the FAA has adopted this new Compliance Philosophy, FAA enforcement of the laws and regulations is still alive and well in many cases. There are still many investigations of aviation incidents, or accidents, or paperwork violations – including the overworked “intentional falsification” cases. We have seen a raft of these falsification charges from FAA, particularly related to the confusing application for an airman medical certificate and to discrepancies in aircraft and pilot logbooks and other required paperwork. That is not a criticism of the FAA inspectors who are good men and women who are just doing their jobs. But, that is small comfort to the many that have and will become subject to an FAA investigation, many whose careers and businesses are dependent on holding onto their certificates.

It’s more than a catchphrase.

The many who are caught up in FAA investigations and enforcement, and who are not beneficiaries of the new compliance philosophies, nevertheless are entitled to know their legal rights. Especially pilots. We know from long experience that pilots benefit from having a basic knowledge of the law and process in order to protect their interests. This is especially important at the early stages of a budding enforcement case. For example, under the new Compliance Philosophy where a pilot’s willingness and ability to comply with the regulations is material in getting a “kinder” result, this willingness needs to be demonstrated immediately. A pilot should be cooperative, and particularly evidence cooperation, but only after the pilot understands the basics of the process so that a pilot will not unnecessarily say something or do something that will come back to hurt a legitimate defense to a case that may go forward. Many times a pilot will not, early on, recognize that he/she is in a budding enforcement case, or know his and her legal rights, without this basic knowledge.

What is most timely for us to offer right now is to remind pilots to take advantage of the programs that can immunize a pilot from FAA enforcement. There are several. But, there are strict time and structural limitations that can strip pilots of the benefits of the program. These are programs that the FAA has instituted to receive reports of possible unsafe conditions in our airspace system so that they can be addressed before turning into tragedies. In return for timely reports from pilots, the FAA will waive or forego certain aspects of enforcement. These programs include: ASRP (the Aviation Safety Reporting Program); VDRP (the Voluntary Disclosure Reporting Program) for Air Carriers and Regulated Entities; ASAP (the Aviation Safety Action Program) for employees of air carriers and repair stations; and some others.

The main reason for these programs, which is background to this reminder, is to provide a free flow of safety information to the FAA and others in the aviation community. The programs accomplish this by inviting reports from the persons most likely to encounter unsafe conditions in our national airspace system. The FAA understands that pilots and others might be reluctant to relate incidents that are embarrassing to them or that could involve violations of the regulations. To overcome this reluctance, the FAA has adopted a method by which the FAA can get such information, and in return, the FAA will forego taking the enforcement action or waive the imposition of sanctions ordinarily involved. VDRP, for example, invites disclosures and associated corrective actions from air carriers (parts 121 and 135 entities) and repair stations (part 145 entities); ASAP invites reports from over 500 aviation entities that have executed MOUs (Memoranda of Understanding) with the FAA. These are excellent programs, but pilots may or may not also get protection from these programs depending on the circumstances.

For the certainty of inclusion of pilots, the most important of these programs is NASA’s Aviation Safety Reporting System (ASRS) that invites reports from pilots and others. The FAA’s Aviation Safety Reporting Program (ASRP) helps to encourage such reports by committing to waive sanction if the FAA takes enforcement action related the conduct reported to ASRS – the “immunity.” Mind you, the FAA doesn’t get the report to prompt an investigation; the report is held in confidence. But the FAA usually has other information related to the incident that causes them to investigate a potential violation.

In order to guarantee pilots the confidentiality of their reports and the anonymity of the pilot making the report, NASA (the National Aeronautics and Space Administration) acts as a third party to receive and de-identify the reports before any information is passed on to the FAA. The reporting form, ARC Form 277B, the one for general use, is the one that pilots should use. The forms are preaddressed to NASA. It is frequently advisable to mail the form certified, return receipt requested, to guard against the possibility of lost mail.

The well-known “NASA form” can now be submitted electronically.

The form is in two parts: a tear-off identification strip, and a second part that calls for detailed information on the event or situation. When NASA receives it, the identification strip is date-stamped, removed, and returned to the reporter. This is the pilot’s proof that a report has been timely filed. NASA will then delete all information in the rest of the report that could be used to identify the reporter. To further tighten up this security, FAR 91.25 specifically prohibits the use of these reports in any FAA enforcement action.

The newest method of filing a report is electronically. Printing the confirmation screen after filing the report is proof that the report was filed and in a timely way.

There is an important 10-day limit. To get the immunity benefit of avoiding a certificate suspension, the pilot must act promptly to mail (or deliver, including via the Internet) a report within 10 days of (or becoming aware of) a potential violation.

There are some common-sense exceptions to the program.

The FAA will not grant immunity unless the conduct involved in the violation was “inadvertent and not deliberate.” Of course, immunity should not be granted for a deliberate violation. In the past, the FAA had been reasonable in interpreting the “inadvertent” language. Unless the conduct was really deliberate, or grossly negligent, the FAA had been granting immunity and recognizing the unintentional nature of the pilot’s conduct. In more recent times, the FAA has been tightening up on its interpretation of what is inadvertent.

Immunity will not be granted if the FAA’s investigation determines that the pilot is not qualified or competent to hold his or her pilot certificate. Again, this makes sense; a pilot cannot avoid revocation of a certificate that they are not qualified to hold by filing a report. The FAA continues to interpret this exception reasonably.

Here is the one exception to the immunity aspect of the program that is frequently misunderstood. Immunity will not be granted if, in the previous five years, the pilot has been involved in an FAA enforcement action and found to be in violation of any part of the regulations. This limitation is often misunderstood to mean that only one report may be filed in a five-year period. That’s wrong. There is no limit to the number of times reports may be filed. It is only after a formal and official finding of violation is made that the benefit of the program to waive sanction in a subsequent enforcement action will not be available for five years.

Is it an accident? The rules are pretty specific.

Anonymity and confidentiality will not be provided if the violation involves a “criminal offense” or an “aircraft accident” (as very narrowly defined by NTSB). It is important to be aware that a report reflecting a criminal offense will be sent to the FAA and ultimately to the US Department of Justice. Reports reflecting an accident will be sent to the NTSB. In both cases, there will be no confidentiality or anonymity; the information will be sent without being de-identified. In future columns, we will show how narrowly the NTSB defines an accident, a definition that benefits pilots involved in mishaps.

As we said, the other programs, including VDRP and ASAP, may provide some protection for pilots, but as we have seen in some cases, not always. Pilots should always use the ASRP, even if a pilot may be protected by these other programs.

In future columns, we will address in greater detail the kinds of cases the FAA is pursuing, including explaining the federal legislation called the “Pilots Bill of Rights” in its two iterations; the FAA’s new Compliance Philosophy; drug and alcohol testing pitfalls; the benefits to pilots from the Equal Access To Justice Act; most importantly, if and how to respond to an FAA inquiry; how long can FAA delay in bringing an enforcement action; a pilot’s Rightful Reliance defense to an enforcement action, and much more.

The GPS revolution at 20 – how aviation has changed