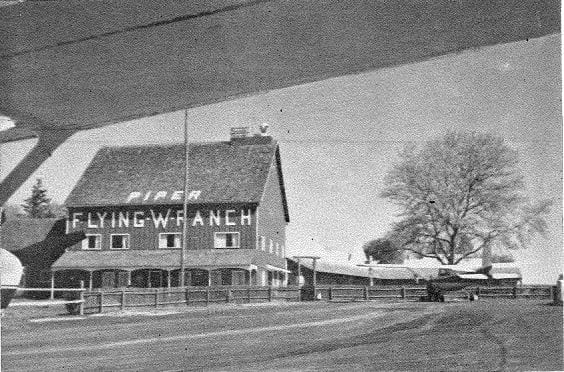 In this trip through the Air Facts archives, we stop in June, 1963, where Richard Collins reported on a new airport just east of Philadelphia with a unique community atmosphere. The airport is still around, but the idea never caught on. Why not?

This article first appeared in the June, 1963 issue of Air Facts.

There are all kinds of airports in the United States. Big, small, fancy, and plain. The relatively new Flying W airport in the East, though, is worthy of special mention because it is something new and different. The airport is shown on the New York sectional as “Flying W” and is located on the 177 degree radial of the Yardley omni, 22 miles out. This is about 20 miles east of the center of Philadelphia.

Flying W seems to be out in the country―where you wouldn’t expect to find much aeronautical activity. The closest town of any size is Mount Holly, New Jersey, population about 15,000. Flying W is, however, a beehive. On a recent Sunday they recorded over 700 aircraft operations. Flying W Ranch is a Piper dealer and has sold about a million dollars worth of airplanes in the past year—about half of which were new. Their flight school has 65 students and offers courses leading to all flight ratings with the exception of helicopters. Flying W charter service utilizes the Piper single-engine fleet plus two IFR equipped Aztecs, a Twin-Beech, and a DC-3. Seventy privately owned aircraft are based on the field, and Flying W employs 40 people. Aircraft and engine maintenance and radio sales and service are also offered.

On final for runway 36 at the Flying W Ranch.

A fellow named Bill Whitesell brought all this about. He had the idea a few years ago that a “country-club” like airport would be a good thing for the Philadelphia area so he bought a 150 acre farm and started work. Old farm buildings were restored and enlarged, and hangars were constructed. An olympic-size swimming pool in the shape of an airplane went in as well as riding trails and stables, children’s playground equipment, picnic grounds, two restaurants, a cocktail lounge, and classroom and office facilities.

In the beginning Flying W had a 2,800 foot paved runway. Experience dictated the need for a longer primary runway, though, and the paved north/south is now 3,900 feet long. This wasn’t an easy trick as a ravine had to be filled before it was possible to extend the runway and it took 140,000 cubic yards to accomplish this. A crosswind runway is 1,900 feet long and paved. The long runway is lighted, and what is probably the only privately owned omni station is in place on the field and ready to go as soon as difficulties with FAA over a frequency assignment are settled.

The Flying W Ranch is very near completion now. All that remains to be finished is a 40 unit motel, and a few of the 25 T-hangars.

There is no landing fee at Flying W, and the two restaurants and the cocktail lounge are open to the public. The horseback riding facilities, swimming pool, playground, picnic areas, and some clubrooms are for members, and membership is still open. A social membership in Flying W is $110 per year. An aircraft owners membership is $180 per year and includes tie-down as well as the other benefits of membership. A flight club membership is $110 a year plus $100 entry fee. The $110 per year covers the use of all the facilities, and the one-time $100 fee allows the flight club member to use Flying W’s fleet of new Pipers at reduced rates. A member pays $8 per hour for a Super Custom Colt on weekdays, $10 on weekends. A super Custom Cherokee is $14 per hour, a 180 Comanche $20, and a 250 Comanche $25. Rates on all but the Colt are the same—weekday or weekend.

The pool is in the shape of (what else?) an airplane.

About half of Flying W’s members belong only to the social part. A number of these people don’t even fly now, but with the enthusiasm for flying which is prevalent around Flying W they probably will soon. The bulk of the membership is from a 50 mile radius but there are members from Connecticut, Long Island, Baltimore, Washington, and even one from Raleigh-Durham and one from California.

Many people who do not belong to Flying W fly in for breakfast, lunch, or dinner, and a special attraction is a Sunday roast beef buffet. Last week they had about 200 for this, approximately half of which arrived by airplane. This starts at 2 on Sunday afternoon and runs until 8 in the evening.

The Flying W represents a tremendous investment, and its success is such that Whitesell has been thinking of the possibility of more Flying W’s in various parts of the country. Also, other people have looked at Flying W with the idea of a similar facility in their area.

There’s plenty for the kids to do as well.

The success of the Flying W is significant. For one thing it proves that the flying public wants and will support an airport which offers, in addition to a place to land, a recreational facility that can be enjoyed by the entire family. It also shows, by the number of people who fly in to use only the restaurant facilities, that any time an airport is available with excellent food service it will attract a large following.

Perhaps, though, the most important contribution of the Flying W is what it offers to people who want to learn how to fly. Wives, when their husbands want to start learning to fly, can often see it only as an activity that flattens the budget and takes good old George to the airport on weekends thus leaving the grass to grow and the house to remain unpainted. Flying W can’t do anything about the chores about the estate, but it does offer, at reasonable cost, a very pleasant lot of recreation for wives and children while Daddy is learning to fly. Of course Mother can learn too, and really make it a family affair!