Blog - Latest News
You are here: Home1 / Article Archive2 / I was there3 / A frozen brake slide 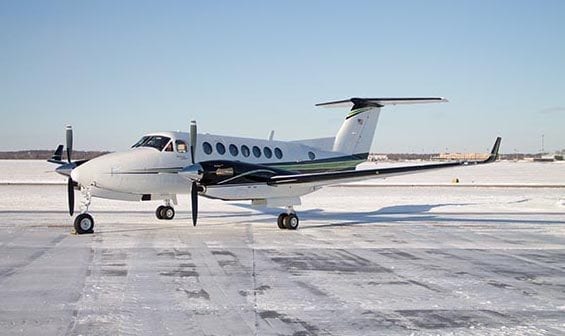 It had been a brutal end of December and early January winter weather assault across the Great Lakes states. Temperatures were way below average, and snowfall was a daily event. After nearly three weeks without air temperature rising above freezing airport ramps and taxiways were skating rinks.

So it was with great caution that – after a long taxi in moderate snow – I eased the King Air 350 to a stop in front of the FBO office. Only my co-captain, Bill, and I were onboard. We had delivered passengers to Toronto and were landing to clear U.S. Customs back into the country.

With the friendly Customs officer done walking around the airplane with his Geiger counter, and finished checking our passports, and asking the usual questions about guns and booze and more than $10,000 in cash, we were ready to be on our way.

I walked around the big King Air on the way back from paying the landing and handling fee in the FBO office, and everything looked normal. It was so cold the light falling snow wasn’t sticking so there was no need to deice.

But the left main gear looked a little odd. It appeared that the tires had sunk into the hard-packed snow and ice that covered the entire ramp. The right main tires sat atop the ice without any hint of melting into the ice. It crossed my mind that the left brakes could be frozen, or maybe the tires were frozen to the ground.

Those engines put out a lot of thrust – which is a problem on a snowy and icy ramp.

I started the engines with the propellers in feather, which is standard procedure anytime the airplane is on a potentially slippery surface. The PT6 engines start just fine in feather and many pilots use this technique anytime they are on a crowded ramp to keep propwash from blowing around people or other airplanes that are nearby.

The ramp wasn’t crowded with only one other airplane, a Falcon 2000, parked directly ahead. The FBO office was to the right but at least a full wingspan away. The lineman backed up farther than normal to be in position to marshal us out of the parking spot.

With clearance from ground control to taxi, I brought the props out of feather into ground idle power. Nothing happened. The King Air didn’t move. So I added a little power on the right engine to start the airplane turning left to exit the ramp.

Suddenly the King Air started to move. But it wasn’t turning left, it was slewing to the right. I mashed both brake pedals as hard as I could, but the airplane kept sliding toward the Falcon and the FBO office building. The lineman started running backward as fast as he could on the icy surface.

As soon as I realized what was happening, I lifted the throttles over the gate to put the props into Beta position. The King Air 350, unlike many other PT6-powered airplanes, has a gated Beta prop position, with another gate to lift over to put the prop blades into reverse.

In turboprops, Beta mode positions the prop blades near flat pitch so the props can maintain rpm but produce little, if any thrust. Beta works great for slowing after landing because the flat pitch props behave more like a big disc adding gobs of drag without using reverse thrust which can throw up debris from the runway that erodes the prop blades and may even enter the engine intake as FOD that can severely damage the engine.

But it takes a little time from the prop blades to reposition from ground idle to the flat Beta angle, and we were still sliding and turning right. I then lifted the throttles up over the Beta gate into reverse to push us backward. But that caused the prop rpm to momentarily increase as the blades repositioned and, if anything, that caused a very momentary increase in thrust. And momentary – when you are sliding on ice toward a building and a big business jet – is an eternity.

Lucky for me, Bill had a better idea and reached over and yanked the props into feather. It worked. The props feathered almost instantly and we stopped with a few feet to spare.

So what happened? The right main gear brakes froze and locked the wheels. When I added a little power to get the airplane moving, the left wheels turned briefly but the right brakes were frozen which slewed the airplane to the right. I quickly stomped both brakes but by then locking up the left brake, too, did nothing to slow the slide or change direction because the tires had zero traction.

The King Air has a brake heat system that blows hot engine bleed air on the wheels to thaw a frozen brake. But despite replacing every component of the system – several more than once – anytime we have used the brake heat the valves fail to close. So there you are, after taxi and ready for takeoff, and the brake heat won’t shut off. If you do take off, the brake heat system will be blowing hot air on the retracted gear in the wheel wells and there is nothing you can do but return and land to try to unstick the valves. For us brake heat is a solution to one problem that only creates another.

The line crew had to bring out a tug to push us back away from the building and pointed at the ramp exit. And away from the Falcon. The guys on the tug told us that at first as they pushed us the right main wheels simply slid on the ice but then eventually began to turn.

So what did I learn from a terrifying toboggan ride in a King Air? If the ramp is slippery and I landed or taxied in snow, never bring the power above idle to taxi. If the airplane won’t move at ground idle power on an icy ramp, figure out why. And if nothing else have the line crew get a tug and make sure the brakes aren’t frozen, and get you pointed in a safe direction. Once you start to slide with frozen brakes, you are along for the ride.

No way to become an ace

Teaching flying over the years, part two: dealing with the students
Scroll to top