Blog - Latest News
You are here: Home1 / Article Archive2 / I was there3 / Making an air drop from a Champ on floats – only in Alaska 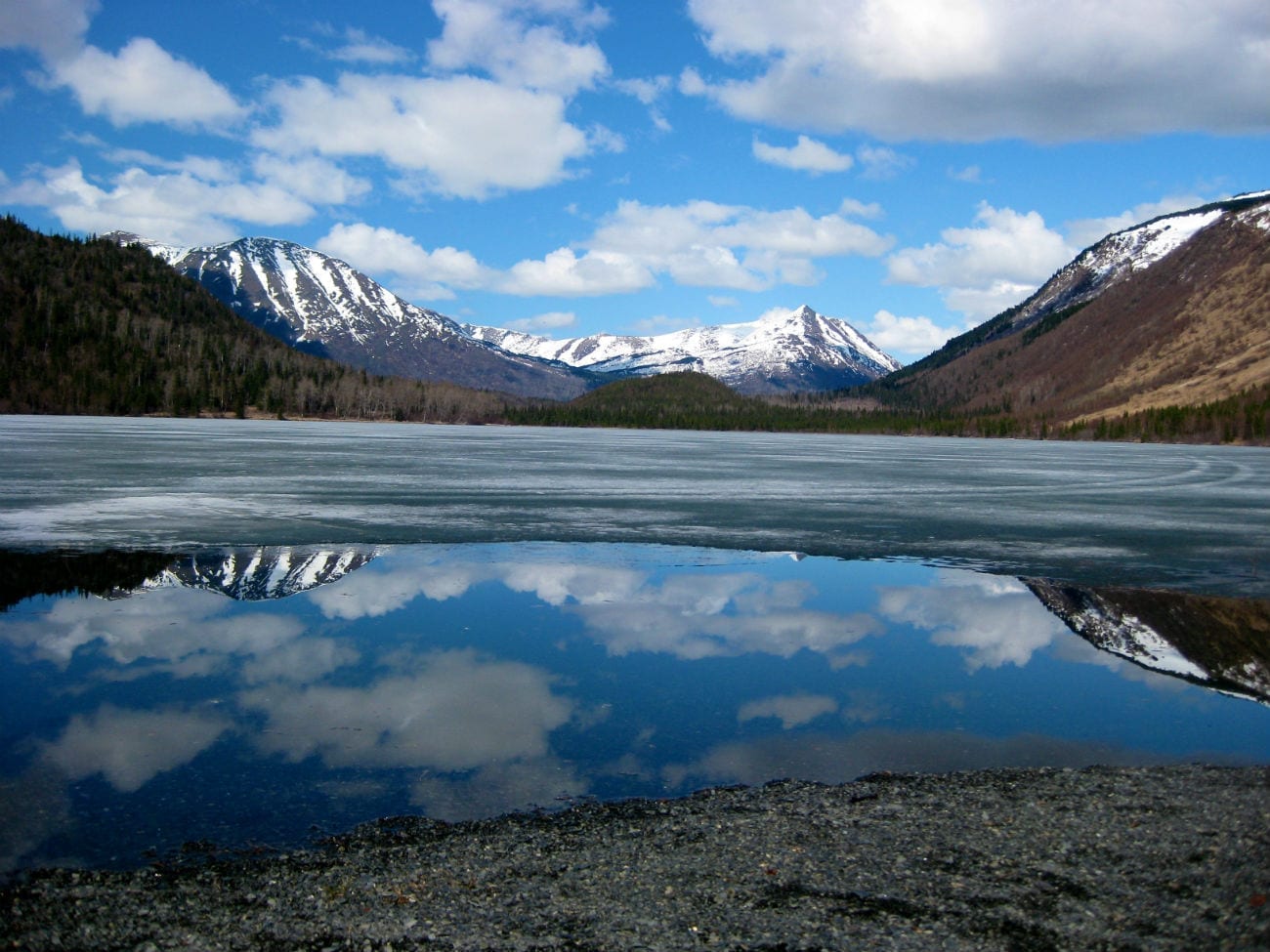 It was on a sunny Tuesday, August 18th, back in 1957, that I was ready to set up a sheep hunting camp in the Chugach Mountains of the Kenai Peninsula, south of Anchorage. These sheep, kin to the Rocky Mountains bighorn sheep, are pure white. They are a much sought after sheep trophy for truly dedicated sheep hunters, and are usually the trophy that fills out the Big Four of America’s sheep trophies. And, no, the meat isn’t wasted, since it’s really quite delicious. Believe me, America’s big game hunters go glassy-eyed when thinking of a trophy Dahl ram hunting trip. For many, it will be the trip of a lifetime.

The weather couldn’t have been better, though it would be a bit breezy in the mountains. I’d be supplying our proposed sheep camp with an air drop from a float-equipped, 65-hp Aeronca Champ. My flight log at the time showed that I had less than a meager 82 hours as a pilot. That was the total of all my wheel, ski, and float time. Confident I was; experienced I certainly was not.

A Champ on floats is not exactly a big performer.

After a thorough pre-flight inspection, and after loading aboard all the gear, supplies, and miscellaneous that I planned to air drop, I strapped myself into the little plane and lit it up. The float heels were still hauled up on the beach so that the little beast wouldn’t get away from me until I was ready. I was prepared to begin the flight as soon as the oil temperature needle came off the peg.

Adding a bit of power, the small floatplane and I slid smoothly away from the sandy beach of Spenard Lake, a part of the canal-connected pair of lakes we know as Lake Hood, only a few miles from downtown Anchorage, Alaska. The world’s largest seaplane base, it is. Ah, the exhilarating feeling of being master of all you survey…

I added enough power to raise the nose while I went through the engine run-up, magnetos check, verifying control movements, and the like, and then settled down to turn to the heading that would allow my takeoff on a westerly heading. Because I had no radio in the little plane, I would have to make a pair of right turns after takeoff, and then fly toward the Chugach Mountains until I was clear of both Merrill Field and Anchorage International airport. And then I’d simply turn south, climbing to 2,000 AGL to cross Turnagain Arm, unfriendly water for sure, bound for the Kenai Peninsula to the south. When I went feet dry on the south side of Turnagain Arm just a few minutes later, I’d be flying southward, and hard up against the Chugach Mountains, just off my left wing.

It was truly a gorgeous Alaska morning, and I wouldn’t have traded the moment for all the tea in China. The flight to Lower Russian Lake, and Surprise Mountain on its south shore, would take only another 40 minutes more.

The Chugach Mountains tower over Anchorage.

When I reached a notch in the mountains with which I was familiar, I turned left into small valley that housed a pair of small lakes. Good moose country, I knew. Then it was straight ahead to cross the upper reaches of the Kenai River and through the small slot that would dump me out over the Lower Russian Lake.

I circled Surprise Mountain on its south side, known locally as Russian Mountain, and then set up for my landing on the lake. There was just enough breeze on the lake to make it an easy landing, rather than the slick water landing I was used to at this tightly held mountain-shrouded lake. It was here that I would transfer the interior load onto the top of the left float, covering it with a GI rain poncho to keep it dry from the water I knew the floats’ spray rails would generate.

After having tied everything down beneath the poncho, I secured the line to the float fittings and passed the bitter end through the pilot’s window, where I planned to later yank it free. Finally, I found a piece of alder about four feet long, trimmed the piece closely, and passed it through the pilot’s window. This would be the prod with which I’d shove the load off the float deck if necessary.

My mental review of the whole enterprise was satisfactory, and with another pre-flight and run-up, I was ready for the 2,000 foot climb to the pass where I’d get rid of the exterior load. Piece of cake, I thought…

In the little low-powered and loaded Aeronca, the climb to above the altitude at the pass seemed to take a week of circling the lake, about one-half mile wide by two miles long, and struggling seemingly forever upward. Still it was gorgeous morning, and the climb was somehow relaxing. I had time to reflect on the flight that had taken the life of my friend, Jack “Smiling Jack” Wade, when 50-knot winds had blown his Aero Commander 560 into the rock face only a few feet below the top of the mountain and one-quarter mile south of the spot where I’d drop my load of camp gear and food.

Little Surprise Mountain lies between Skilak and Lower Russian Lakes, and it sticks up a meager 3,000 feet from both. It isn’t really much of a mountain, in the overall scheme of things, but it does harbor a small gathering of white sheep. I had expected a routine air drop mission, if there is such a thing, and was surprised when it didn’t come off exactly as I had planned.

I had approached from the Skilak Lake side and slipped through the notch of the small pass toward Lower Russian Lake. I was less than ten feet high when I overflew the proposed campsite. But when I yanked that tricky slip knot free – nothing happened! Nothing that is, except that the covering poncho ballooned out like a green parachute, yanking the small plane off its forward heading.

We were now in a violent forward skid. I had insufficient ground clearance to try any goofy airplane handling; and I surely wasn’t ready to use my alder pole, now nothing but an impediment to aircraft control at any rate. The wind was out of south and, since I was in the shadow of the mountain top close off my right wing, the downdraft was appreciable. I slid over the edge of the mountain with a loud exhalation, and proceeded to slip and spiral down to land on Lower Russian Lake once again. With the poncho drag chute now banging and flapping around almost free of the float, I expected all the camp gear, including a couple of sleeping bags, to get well soaked when I landed. For some reason, they had remained dry, even with the dousing from the spray rails’ shower.

I repacked everything again, and then took special care in once again securing both the poncho and its securing line. And then I took special care in locating the alder prod so that I could use it. That meant sticking half of it out through the pilot’s window, and flying with the other end in my lap. This whole thing had not been a well-planned mission, but it surely was turning out to be an educational experience of considerable value.

The second climb to the required altitude took another week or so, it seemed, but I was finally turning from Skilak Lake for another pass over the proposed campsite. Confidence and expectation had wildly parted company, and this attempt was little more than a dim hope at that point. I didn’t know what I’d do if this attempt failed. Thoughts of a bent airplane, or worse, hadn’t yet entered the mix, but that surely was a real possibility.

With the prod firmly in my left hand, and the free end banging around in the wind outside, I once again approached the drop site. It was now a bit later in the morning, and the winds had picked up somewhat from the heat. I put the airplane into a forward slip and jammed the prod in place low against the external load. I yanked the slip knot free with my right hand (the stick was now firmly clamped between my knees), and pushed the alder prod with all I had at that damned load.

When the load finally slipped free, I was flying at about 30 degrees to the right of my real course, and still losing altitude. The downdraft was scary for sure, and when I slipped over the edge above Lower Russian Lake, there couldn’t have been more than two or three feet between the float keels and the brush beneath the hurtling little airplane. But the bundle was at last free of the float! Success, was it? No, it was more of an escape, as I look back on it. Did I learn anything from all this foolishness? Oh, you bet I did!

Flying with a young child – is it possible?