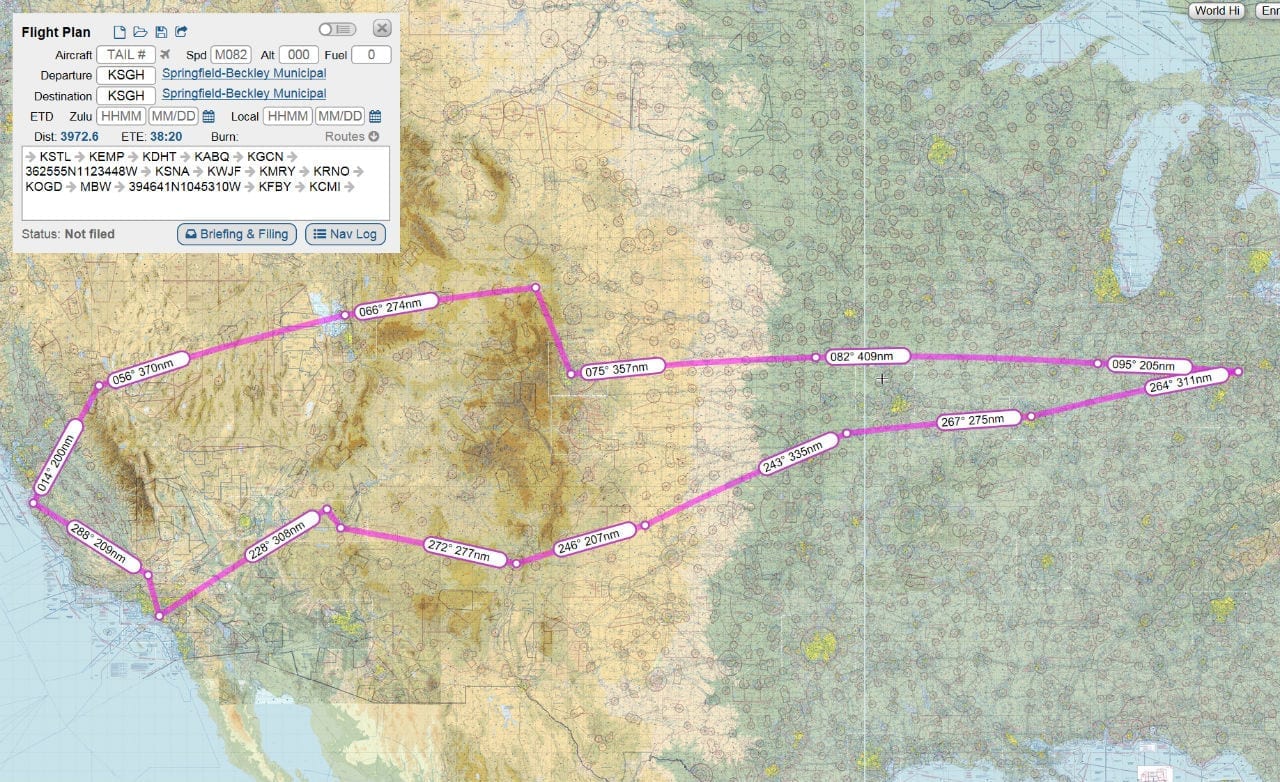 The first big cross-country flight I made in a light airplane was in 1976. A college buddy and I thought it would be fun to fly from Ohio to California and back over Christmas. Being young, single, and invincible at the time, we did not think too much about what the weather might have to say about it. We departed Springfield, Ohio (KSGH) on December 20 in a borrowed 150-hp AA-5 Traveler. Our outbound route took us down to Albuquerque, New Mexico, by way of Saint Louis.

An ambitious plan in a 150hp airplane.

Although it can be great fun to travel by small plane, sometimes it is only a little more interesting than driving. Therein lies the paradox. Flying is “long hours of boredom punctuated by moments of sheer terror.” As a pilot, one works hard to avoid the terror part. The scenery did not really start to get interesting until past Albuquerque on our way to the Grand Canyon.

In those days it was legal to fly down into the canyon at will. We topped off at KGCN and headed north. Crossing the South Rim and flying out into the great abyss made it feel like I was going to fall through the floor of the airplane. It took a while to acclimate to the surroundings, but then we dropped down below the rim and followed the Colorado River westward for about 45 minutes. Little did we realize that such pleasures would be forbidden in the late 1980s as the FAA began imposing airspace restrictions due to increasing traffic and mid-air collisions in the area.

It was once legal to fly right down the Grand Canyon – an amazing view.

Once out of the canyon, we headed southwest toward that night’s destination, John Wayne/Orange County (KSNA). Back then it was just Orange County because the Duke was still with us. We were cruising along minding our own business south of Las Vegas when a Boeing 737 came whizzing past going the opposite direction, not very far off to our left. I can’t say how close it was, but it was close enough to make a memory. It always pays to look out the window. We could see the smog backed up against the mountains as we began our descent into the Los Angeles basin.

My eyes and nose began to burn when we went from the clear air above into the brown cloud below. It’s no wonder California imposed the strictest emission controls in the country. Although technically VFR, the visibility was reduced and the vast expanse of the urban landscape made it difficult to spot the many aircraft around us. We had to keep our heads on a swivel as ATC gave us vectors and called out traffic. Another 737 was landing next to us on the parallel runway as we rolled out on 20L. It was then my companion recalled that KSNA was the second busiest airport in the area.

After a couple of days, we headed north to Lancaster. My friend had an acquaintance at Edwards who showed us what he could there at the flight test center. The next day was Christmas Eve as we winged our way across the San Andreas fault while enroute to Monterey (KMRY). The fault is a sight to behold from the air and almost defies description. The land looks tortured. Talk about an accident waiting to happen…

Christmas Day found us at Monterey Bay and we pretty much had the place to ourselves. Although the surroundings were beautiful, it was here that I began to think that deliberately being away from family at Christmas was not such a great idea. I had broken up with my girlfriend right before the trip. I later learned her mother thought it was because I did not want to buy her a Christmas gift! That wasn’t the reason. I guess I thought going on this big trip was more important than being with her at Christmas. Instead, I was 1772 nautical miles away, feeling pretty lonely.

Lake Tahoe is an awe-inspiring sight from the air.

The next day it was time to begin the trip home so we departed KMRY first thing in the morning. To our surprise and delight there were whales spouting as we flew over the bay. The Sierra Nevada Mountains slope gradually upward as one approaches them from the west. The Traveler’s cruise climb worked out just right to keep us at a constant height above the rising terrain. Topping the climb at Lake Tahoe, we were treated to a magnificent view as we crossed over the lake and then down into Reno for fuel. Flight in the lower atmosphere affords an appreciation of the land that can be had no other way.

From Reno it was on to Ogden, Utah for the night. The Nevada landscape is a forbidding sight from the air – long stretches of desert punctuated by stark mountain ridgelines. Lindbergh’s account of his trans-Atlantic flight includes an eloquent description of crossing the western deserts in the Spirit of St. Louis. The Spirit was built in San Diego and Lindbergh had to fly it all the way across the country first. Leaving Ogden the next morning, we circled for altitude and then threaded our way through a gap in the mountains to the east. The relatively flat terrain in southern Wyoming is around 7000 feet above sea level. It did not take too much in the way of thermal activity to get me thinking about how marginal the performance of our normally-aspirated 150-hp airplane really was in that situation. Flying in the high country demands a good working knowledge of the elements and the aircraft. We did have enough sense to stay out of the Colorado Rockies so we were tracking ENE to the Medicine Bow VOR before turning south to Denver.

Upon arrival in the Denver area we landed at Stapleton. Remember Stapleton? It was right next to downtown Denver, with close-together parallel runways, and Interstate 70 running beneath it. Our little four-seater felt distinctly out of place taxiing between the big jets, but we managed to avoid getting blown away. The next couple of days were spent at a friend-of-a-friend’s cabin up in the foothills outside of town. It was good times with a group of single folk. I went for a walk up the mountain one evening by myself just to soak it all in. I suppose the thoughts once again turned to home and hearth. More on that in a bit.

As it turned out, the weather had been cooperative until it was time to leave Denver. By now it was December 30 and Mother Nature deemed that winter should get going. We departed Stapleton after waiting for some snow showers to move out and then promptly encountered them in flight. We should have checked the radar summary first! (There was no such thing back then.) We dodged and weaved our way around them for the first 100 miles or so and then it cleared up. We were determined to get home that day, but it was going to take some effort.

The breakup was temporary – 37 years of marriage prove that.

By the time we landed at Champaign/Urbana (KCMI) for fuel it was dark and cold. Really cold. So cold that when we went to start up, the battery would not crank the engine. Since my buddy was a pilot, I trusted him to hold the brakes and work the throttle while I got out and swung the propeller. God was kind and we got it started without any injury being inflicted. The battery having been drained, we could barely make out the tower on the radio giving us clearance to taxi and take off. We’re “pretty sure” we heard them say that. The rest of the flight was uneventful, although it was about 1:00 am the next morning when we finally shut down and tied down back at KSGH.

And what about that old girlfriend? We got back together. I am proud to say she has been my wife these past 37 years. It was a great trip. I’m glad I did it, but I learned a few things about life along the way.

N6037L, if you’re still out there, thanks for the memories.

We didn’t make it to Grandma’s, but we had a Merry Christmas

Martha Lunken on flying home for Christmas
Scroll to top