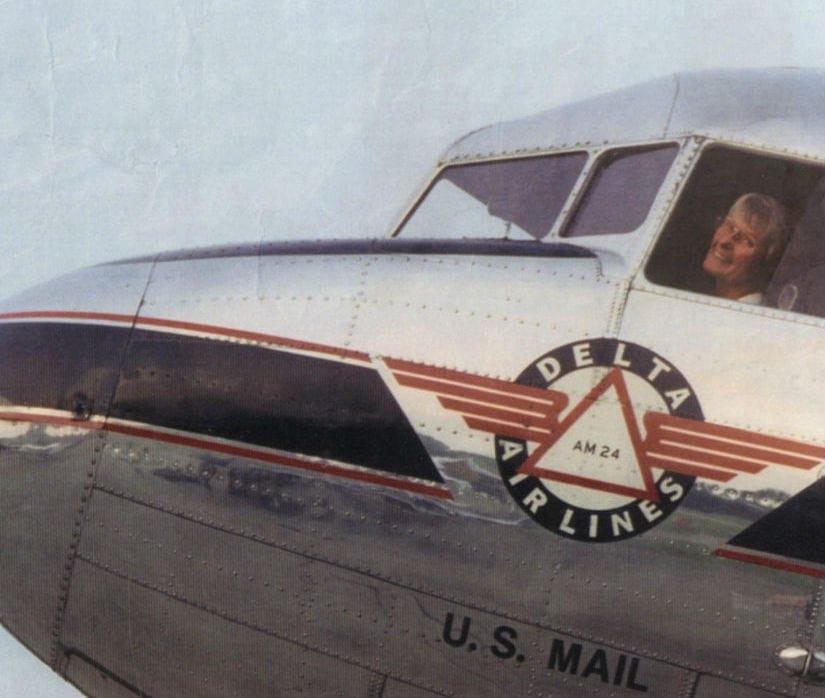 I’m essentially a little airplane pilot and only rarely have I “flown far out across the prairies of the sky to lands my fathers never knew and shores my kindred never trod,” but I think any pilot understands Gill Robb Wilson’s feelings about flying home for Christmas.

I’ve blessed my wings a thousand times
For where they’ve carried me…
But there is a nearer ecstasy! The wings that bear one home… The joy of letting down to the place
The heart has never left—the thrill
of returning to the one spot on earth
beloved above all others—home!
And, if it be “Home for Christmas,”
How thrice blessed are my wings.

Do you know about him? Do you remember him? 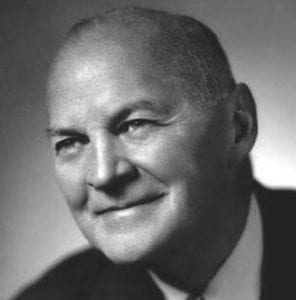 As a teenager, the only thing I knew about airplanes was that I desperately wanted to be a pilot. But I faithfully read Flying magazine every month and my favorite feature was “The Airman’s World,” usually a two-page spread with a wonderful poem about flying and a photograph illustrating the verse. The poetry was from a collection written by Gill Robb Wilson, an iconic airman from Pennsylvania who was the magazine’s publisher and editor from 1952 until 1962. He was the son of a Presbyterian minister who learned to fly at the outbreak of WWI and was awarded the Croix de Guerre as a pilot in France. I guess he followed his father’s footsteps because he was ordained in the Presbyterian Church but turned to writing and became the long-time aviation editor of The New York Times. In his “spare time” Wilson was not only an active pilot but a founding member of the Aircraft Owners and Pilots Association and the Civil Air Patrol.

But whatever else he was, Gill Robb Wilson was most definitely the inspiration for one awkward, gawky, Midwestern teenager who wanted to be a pilot more than anything in the world. Recently I was rereading his poems and the one about Christmas in “The Airman’s World” reminded me of my best ever Christmas flight… a flight where I wasn’t even the pilot.

In the early 60s, when I was working for Ebby Lunken’s Midwest Airways, a salesman friend asked me to ferry a Tri-Pacer from Cincinnati to Clarksville, Tennessee. On this Christmas Eve afternoon, it was cold and clear but the wind was howling out of the southwest. I was making about 60 knots over the ground and was so late reaching Clarksville that the guy who would bring me back left hours before I landed. After a few phone calls, the broker, Jerry Swart, reluctantly bought me an airline ticket home and the nice people at the Outlaw Field FBO took me to Nashville in a 182 to catch the late flight. I called Ebby to say I wouldn’t be back in time for the Chrismas Eve we’d planned together. See, we were engaged but I was 21 years old and he was 51; our wedding date was on an indefinite hold because of considerable family pressures… from both sides. 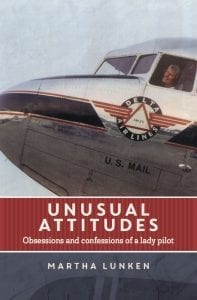 This article is from Martha Lunken’s latest book, Unusual Attitudes.

Anyway, I sat around for hours in the nearly deserted Nashville Airport with a couple of bucks in my jeans, hungry and tired and feeling sorry for myself. When we finally boarded, there weren’t many passengers and I stuck my head in the cockpit to talk to the crew. I don’t remember the details but I’m sure it was because I wanted to see the cockpit and I’m pretty sure it was because I wanted them to know I was a pilot! Whatever… I was young and pretty and interested and it was Christmas so the Captain invited me to ride up front on the cockpit jumpseat of this magnificent American Airlines DC-6. I will never forget that crystal clear night flying at about 10,000 feet past Louisville and then descending into Cincinnati. With the cockpit lights turned down, the stars winked like diamonds and green and red Christmas lights on the ground glimmered and sparkled. That magic night will always be my most treasured piece of Christmas jewelry.

At Greater Cincinnati Airport, we wished each other Merry Christmas and, still hoarding the two bucks in my pocket, I used a borrowed crew pass to ride the bus downtown. I called Ebby and he told me to get a cab to Lunken Airport where he’d be waiting to pay the fare and take me home. And I remember commiserating with the cab driver as we drove out Columbia Parkway about what a miserable, lonely way this was to spend a Christmas Eve. I was lying through my teeth, of course; it had turned into the best Christmas ever.

It was getting close to midnight when Ebby and I got to his apartment and we shared a Christmas Eve drink while I recounted my wonderful adventure. And then he said he wanted to read me something, a story he always read whether alone or with friends on Christmas Eve. I don’t know where it came from… maybe the little tale had been published in a magazine or more likely it was a hand-out for Delta Air Lines passengers at Christmas in the early 50s when the airline operated DC-4s. 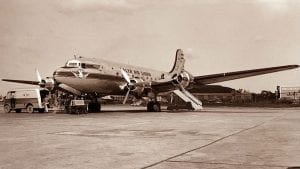 “A time when captains could walk through the cabin of his airliner.”

I guess I love it because of its frank sentimentality and, of course, the memories it holds for me. But also because it’s a reminder of the time when a captain could walk through the cabin of his airliner going “four miles to a minute,” at “exactly 10,000 feet,” and chat with his passengers.

A bunch of Christmas Eves have passed since then and I’ve accumulated lots of Christmastime flying adventures… some glorious fun, some beautiful, a couple tragic. But I still read this story out loud, alone or with friends and family, every year. So here, my friends, is my Christmas gift and I… oh well, Merry Christmas to you.

The weather reports say it was snowing that Christmas Eve, with the cold wave sending a White Christmas down to the very fringes of the South. The newspapers say so, too.

And the passengers who boarded at Chicago say it was snowing, that the only lights they saw for many miles that night were stars above the clouds or occasional lights of a distant plane.

But two men who were aboard will solemnly assure you that the night was sharp and clear, no matter what the records, papers or other passengers say and that you could look down and see Yule trees shining in village squares below.

The airliner was flying south above scudding clouds, and the miles between Chicago and Miami dropping behind four to the minute. In the cabin of the big DC-4, most of the passengers were noisily gay, for it was holiday time and they would soon be celebrating Christmas.

As they droned past Cincinnati and on over Kentucky, the stewardess went forward to speak to the captain. One of the passengers wanted to speak to him, she said, when he had time. “Nothing wrong,” she added, “he just wants to talk to you. He’s the old gentleman in Seat 34. It’s his first flight, by the way.”

The captain nodded his way back through the cabin. Yes, they were on time. Altitude? Exactly 10,000 feet. Weather? Miami was perfect; the overcast should end about Atlanta. He finally paused by Seat 34. “Everything all right, sir?” he asked.

A head lifted from the pillow; white hair topped a face lined by many years. “What? Oh, you must be the skipper. Sure, son, everything’s all right. It’s just that my eyes—well, they’re not what they used to be. I thought maybe you could tell me about a place in Tennessee.”

He mentioned a tiny hamlet, settled many years ago when men first pushed through the mountains and named places in terms of simple pioneering folk. He asked if they would pass over it.

The pilot hesitated, then leaned toward the window. “We’re almost there now,” he said softly. “I can see…” and he went on to describe the twinkling lights below in little towns of the Great Smokies, the rising hills and then the mountains jutting into the sky. They talked about peaks known as Parson Bald and Hickory Top and Hannah Mountain, as the old man explained he had been born down there and hunted their ridges as a boy. Then the pilot said he could see the exact village, he knew it well, and though there weren’t many lights they were shining bright and clear tonight with tints of red and green.

Nodding, smiling with quiet happiness, the old timer listened. Then he thanked the captain and said he guessed he would doze a while so he would be fresh when he met his daughter and son-in-law in Miami.

In a steady routine, they picked up checkpoints—Atlanta, Macon, Jacksonville—and swept along Florida’s 300-mile strip of coast where white fringes broke against the darkened beach, and they came down out of the night into the soft warmth of Miami.

The passengers vanished in a flurry of greetings, and the two pilots hurried to finish their flight reports and head toward home. “Tell me one thing,” the co-pilot said as they walked out to their cars in the parking lot. “What was all that travelogue you were giving the old man? The stewardess said you had three or four passengers straining their eyes to spot some lights in Tennessee, but you know we couldn’t see the ground until beyond Atlanta.”

The old flyer glanced at his watch. “In just one minute,” he replied, “it will be Christmas. So maybe you can stand a sixty-second sermon. You know every man has some one place he calls home. And even if he can’t go back, he likes to think of Christmas as still perfect there.”

He paused, as far off a midnight bell began to ring and over the usually raucous public address system came the unexpected strains of a carol. Stepping into his car, he rolled down the window and leaned out to continue, “Actually, the spot he was looking for disappeared ten years ago when a big dam backed up a lake over it. But it isn’t likely he’ll ever know that. You see, he was stone blind. So I… oh, well, Merry Christmas to you.”

Editor’s note: This article is taken from Martha Lunken’s latest book, Unusual Attitudes: Obsessions and Confessions of a Lady Pilot, which is available from Sporty’s Pilot Shop. Martha Lunken
For no apparent reason, Martha fell in love with airplanes at age nine and she learned to fly an Ercoupe in the early 1960s while attending college in her hometown of Cincinnati, Ohio. Armed with a degree in English Literature, she became a flight instructor and operated a flying school at Cincinnati's Lunken Airport for seven years. She married Ebby Lunken, for whose family the airport was named. After a divorce and far too much time instructing, Martha reluctantly accepted a job in 1980 as an Aviation Safety Inspector with FAA's Flight Standards Division at DuPage Airport in Chicago. Eight years later she made her way back home via the Indianapolis FSDO and ran the FAA's safety program in southern Ohio ... when she wasn't on suspension. She has an ATP, airplane single and multi-engine land and sea, and a commercial hot air balloon rating. She's type rated in the Lockheed 18, DC-3 and SA-227 aircraft. Martha owns a 1956 Cessna 180, half of a J-3 Cub and has 12,000+ hours flight time.

Flying is great, but family is better – a Christmas story