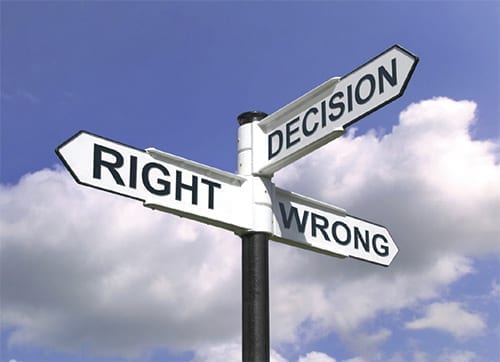 At its most basic, flying an airplane is a never-ending series of decisions. Is the airplane airworthy? What’s the weather like? Where is that other airplane going? When should I turn base? Failing to ask these questions and make timely decisions is a serious mistake – one that will earn you a place in an NTSB report if you’re unlucky.

But there’s another decision-making error lurking out there, one that’s simultaneously more common and rarely discussed: we falsely view most aviation decisions as binary. The language of decision-making subtly reinforces this, with exhortations to “keep it simple” or “be confident.” What we end up with is a hopelessly unrealistic set of answers: yes or no, black or white.

It’s rarely so black and white in aviation.

We should know better. Flying is all about subtle clues, 50/50 decisions and shades of gray.

The most important example of this fallacy is the vaunted “go/no go” decision, a topic that fills textbooks and flight lessons. A pilot looks at his airplane, his skills and the weather conditions, then decides whether it’s safe to fly the planned trip. Most of the time, this is presented as a simple yes or no question. (Heck, we’re as guilty as anyone here at Air Facts, with our interactive weather decision-making series of the same name.)

But making the go/no go decision is hardly that simple. If it’s carefully considered, it’s really a series of questions with a variety of possible answers, more an essay than a true/false question. Here are four ways to expand your concept of the famous decision point.

A great example of this more nuanced philosophy is the estimated time of departure (ETD). Viewed as a binary choice, that line of storms bearing down on the airport looks like an easy no go. But what about leaving an hour earlier, before the storms get close, or leaving the next morning, when skies will be clear? That type of schedule flexibility is exactly what makes general aviation so fun and useful. While most pilots know this, many don’t take advantage of it. Don’t get so locked into your original plan that you fail to see attractive alternatives.

My multi-engine flight instructor used to occasionally challenge me during preflight planning by saying: “you have to go, show me a route that is safe.” It was an exaggeration – we never have to go – but he was an airline pilot by day and wanted me to get a feel for his decision-making mindset. While we may not have a transport category jet at our disposal, it’s amazing how often a flight can be completed safely and comfortably if you’re willing to deviate. On a 400-mile trip, even a 100-mile detour will be quickly forgotten if you have a smooth ride and get to your destination. Especially in the United States, we have incredible freedom to make up our own route, and getting there is half the fun anyway.

Maybe you can’t go direct, but you can still go.

I believe the age-old approach of “taking a look” gets a bad reputation. Certainly, naively blasting off and hoping low IFR conditions will magically disappear is a bad idea. But flying as far as the weather allows and then diverting can be smart and effective. Some days the only option is to fly up to a line of rain, land, and wait for it to pass. That might mean an hour or a day on the ground, but if it’s done with firm limits in mind and plenty of backup options, there’s no reason this can’t be another useful tool in the savvy pilot’s bag. Similarly, you can choose to go some of the way and turn around if it’s worse than forecast. It takes discipline, but Richard Collins has written before about how practical this approach can be.

4. Go solo or take another pilot?

Here’s one that is especially neglected by newer pilots. Some days, especially when the forecast involves thin cloud layers or gusty winds, the safe answer is no go. But if you’re willing to push yourself, it might be a valuable learning experience to go flying with another, more seasoned pilot in the right seat. This is a great way to get “on the job training” without scaring yourself. Just be sure to obey two rules: know and trust who you’re flying with, and thoroughly brief who is pilot in command before starting the engine.

All of these strategies demand careful planning and discipline; they can’t be used as shortcuts or excuses for poor decisions. But grappling with tricky decisions and expanding your personal skills envelope is the one of the real joys of being a pilot.

They’re also an acknowledgement that one of the most powerful safety tools we have as private pilots is the ability to control when and how we fly. We aren’t beholden to chief pilots or customers, and we can each make our own Standard Operating Procedures. If we give up that tool without so much as a second thought, we’ve made flying less useful, less safe or both.

Next time you’re planning a flight, don’t ask yourself “go or no go?” Instead, consider “under what conditions would this flight be safe and enjoyable?” At the very least, it’s a valuable exercise for your decision-making muscles.

Where is the “airport community?”

My floatplane rating – not easy, but worth it
Scroll to top