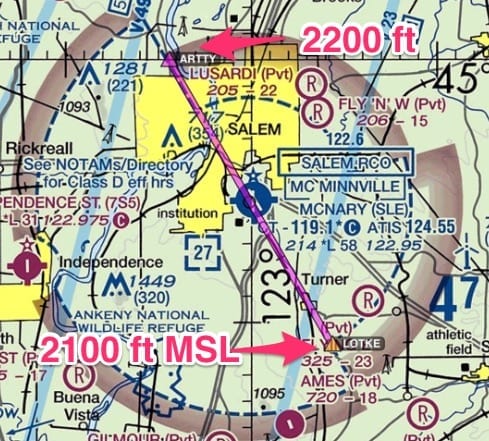 Part 91 VFR pilots have an incredible amount of regulatory leeway, which is both good and bad. VFR pilots operate in the same airspace as commercial IFR jet aircraft without having to ever hit the push-to-talk button. Most of the time things go just fine and the two operate without running into each other.

Not having a requirement to talk to anyone doesn’t alleviate your responsibility as a small airplane driver to understand the airspace around you, though. As an airspace user you need to know who else needs the airspace and why. I was reminded of this recently.

Just because you don’t have to talk to ATC, doesn’t mean you shouldn’t.

The other week as I was on an approach in a regional turboprop airplane, I heard tower make a call in the blind to a small aircraft just outside his airspace.

He proceeded to get into a little tit for tat with a pilot. Tower thought the guy had entered his airspace without calling. He hadn’t, and the pilot wanted to make sure he was good (otherwise he would need to file an ASRS report).

I want to give kudos to the pilot. VFR pilots aren’t required to talk on the radio outside Class D airspace. Even though he wasn’t in the Class D airspace, he was monitoring tower’s frequency and was able to respond when tower called.

They also aren’t required to understand IFR traffic procedures. I get it: less regulation is helpful for our GA community. But I hope to raise your awareness of what goes on in and around Class D airspace. Hopefully, this knowledge will change your behavior.

You see, there are points outside Class D airspace that are potentially dangerous to VFR pilots due to arriving IFR traffic. Talking to tower, and avoiding certain areas will keep you clear of big aircraft coming in to land. And that is less stressful for all of us.

When I flew small planes and helicopters I didn’t understand what the big deal was when big, fast aircraft arrived. Why did we need to get out of the way? I have just as much of a right as big planes! Right?

Kind of. Let’s step into the shoes of an airline pilot for a minute. I want to explain from an airline pilot’s point of view why small GA traffic should pay attention to fast moving IFR traffic.

1. Large aircraft can’t maneuver as quickly or react to situations like small airplanes.

It’s a significant emotional event for an airplane weighing more than 50,000 pounds to do a go-around. The pilots don’t do it that often, and it completely interrupts the flow of the landing sequence. Add bad weather and you have a potentially hazardous situation.

The lack of maneuverability coupled with increased speed is the primary reason you, as a GA pilot, will be asked to get the hell out of the way by tower. Don’t take it personally; just get out of the way. They have paying passengers and are on a tight schedule. You don’t.

At 170 knots, it’s hard to pick out a smaller airplane.

2. It’s really hard to pick out small airplanes when you are going 170 knots and trying to set up the aircraft to land.

Yes, we have TCAS (traffic advisory system), but you still have to look outside to acquire the traffic. We are absolutely required, when we get a “resolution advisory” (RA), to do what the TCAS tells us (ie. climb, descend). We can legally ignore it if both pilots have the traffic and it is no factor, but on an approach that’s a hard thing to do.

I was recently on a commercial flight into Portland, and the 737 had to break off its approach due to a small airplane flying into Pearson Airfield. I suspect the jet got an RA, the pilots couldn’t acquire the traffic, and they had to do a go-around.

3. It gets really busy at the Final Approach Fix (FAF), which may or may not be in protected Class D airspace.

Let me explain for all you VFR-only pilots what these FAFs are and why you should avoid them.

On IFR approaches we have what are called “Final Approach Fixes.” The FAA tries to build them roughly the same way at every airport: 5 NM out and about 1500 ft AGL.

This means a small airplane legally flying 7 NM from a Class D airport at 2500 ft. AGL could seriously disrupt a large airplane’s approach.

Let me show you what I mean with these pictures.

I drew both of the FAFs for Salem, Oregon, and Eugene, Oregon with their corresponding altitudes.

Note they are right on the edge of Salem’s airspace.

Eugene is even worse. Neither point is inside Eugene’s airspace:

So, a VFR pilot cruising around at 2500 ft. MSL about 6-7 miles north of Eugene’s airspace is completely legal not talking to tower, but can seriously disrupt any IFR traffic attempting to land.

1. Large jets typically “configure” the aircraft (put the flaps and gear down) around the FAF.

So, the cockpit is busy with button pushing and reading checklists. In other words, they probably aren’t focused outside.

2. Large airplanes typically capture the glidepath a little before the FAF.

So, the pilots may be distracted making sure the aircraft captures properly.

3. Usually the pilots are switching over to tower’s frequency slightly before but no later than the FAF.

This means if there is traffic they won’t get the call until late in the game. They are also busy switching frequencies.

Center can give the aircraft a traffic warning, but unless the VFR pilot is monitoring Center (which I also recommend you do), Center has no way of telling the VFR pilot they are getting in the way.

This speed varies, but just know they are going fast! Everything moves a million times faster in big jets. That time you take for granted in a small airplane disappears above 120 knots.

What should you to do with this information?

Even on beautiful days, IFR pilots use these points. Because they are about 5 NMs out they are great reference points for turning final.

Don’t worry! You don’t need to know every FAF for every Class D airport.

You can do these two things to avoid FAFs:

Ask an instrument pilot to point out final approach fixes at your local airport.

2. Always monitor and preferably talk to tower within 10 NM of Class D airports.

I also recommend going a step farther and actually talking to tower and letting them know you are getting close to the airport (7-8 NM away).

This is especially true if you are traversing upwind or downwind of the major runways.

3. Know and avoid the FAFs at your local airport.

Have an IFR pilot point them out to you the next time you fly and add them to your GPS.

4. Always adhere to your cloud clearances in Class E airspace!

Flying 500 ft. below the clouds is a requirement precisely for this situation: IFR traffic descending out of the clouds.

If you inadvertently get close to a FAF and you are 500 feet below, you will have time to see and avoid that large beast barreling down on you.

I hope this gets you thinking about VFR flight planning a bit more.

Part 91 does give recreational VFR pilots a lot of leeway. That doesn’t always mean you should take it. Know the airspace around you! 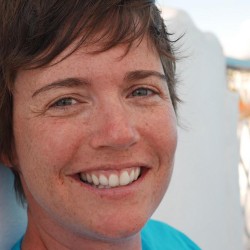 Sarah Fritts
Sarah is dedicated to helping aviators get better at their craft. Sarah is a West Point graduate and Army combat aviator. She flew the OH-58D during the invasion of Iraq in ’03. She also flew C-12s in Afghanistan in 2013. She currently flies the King Air 350 full time out of the Portland International Airport. In her spare time she flies the LUH-72 for the National Guard.She recently wrote a book called The Instrument Pilot’s Survival Guide. You can find more of her work on her website: ThinkAviation.net

5 things every VFR pilot should say