Blog - Latest News
You are here: Home1 / Article Archive2 / I was there3 / The little Viscount that coulda, woulda, shoulda – but didn̵... 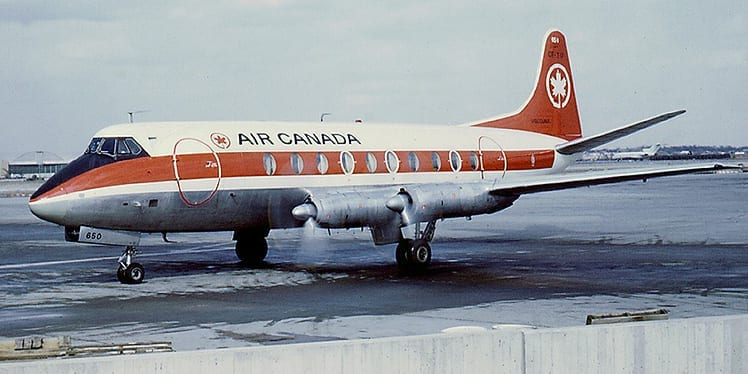 We’d just arrived in Calgary after a short flight from Edmonton. The weather in Edmonton was minus 20F, clear and crisp while Calgary was being plastered by heavy wet snow at plus 18F, with a ceiling of 300 feet and ¾ mile. During the turnaround, I went into our radio room to check conditions further down the line. When I came out half an hour later, the snow had intensified, leaving about three inches over the entire aircraft. There were two men standing on the wing of our Viscount sweeping the snow off with wide janitorial push brooms while a tail a boom sprayer was washing the snow off with what appeared to be heated de-icing fluid. I thought it was odd; I’d never seen anyone using a broom to clear the wings before.

We were late as it was and with the passengers already onboard we taxied out the short distance for takeoff on runway 34, with the full length of 12,675 feet available. Tower told us the ploughs had just swept the runway and cleared us for a rolling takeoff. When we approached the button, we saw the visibility had dropped to ¼ mile in S+ and, as we rolled onto the runway heading, there appeared to be half an inch of wet snow on the surface.

The F/O was doing the flying and just after V1 he shouted out, “Jim she won’t fly.”

I looked over and sure enough saw Jacques pulling back on the wheel… the speed was building, but the nose wasn’t lifting. I grabbed the pole and together we continued to pull back…it moved all right but nothing was happening. I called reject, closed the throttles, the ground fine pitch lights came on and gingerly at first, I applied the brakes as the control tower passed unseen somewhere to our left in the cloying heavy snow. In my mind I could see the little maxaret pucks of the anti-skid system whirling dervishly around in their circular casings squirting little shots of brake fluid to stop the wheels from skidding. And, yes, in case you are wondering, we’d done a full control check during the short taxi out and the Viscount incorporated a throttle gate on the control locks so that the throttles couldn’t be opened to full power while the control locks were on.

Straight ahead into the white blank wall of snow we could only see a few of the closest embedded centreline lights disappearing under the nose… the runway edge lighting was just a blur while not surprisingly the braking action was poor but directional control was good. I kept my hands off the nosewheel steering. With no crosswind, we stopped on the centreline and set in motion the inevitable litany of actions and communications with our cabin people, ATC and company required after a rejected takeoff.

We were as unsure of our exact runway location as was the control tower because of the near zero visibility. What we did know was that we were about half-way into the alternating red and white centre line lights, which left about 1500 feet to the end of the runway. Finally I was able to use the nosewheel steering and with good steering control would take the next turn off as quickly as safety would allow. We’d used about 11,000 feet of runway. Interestingly, moments after we returned to the ramp a Chinook blew through raising the temperature to well above freezing.

Our outbound flight was cancelled and our passengers were protected on other flights, leaving the Viscount in the hands of maintenance, so we headed downtown for an unplanned Calgary layover. It was considered a flight control problem meaning two maintenance signatures and a flight test were required which was done by an airport layover crew. They found nothing wrong… the flight controls worked properly.

One other mysterious thing: the incoming captain on the flight into Edmonton had left a note for us in the logbook that the aircraft had tended to drop out at the last second on the last three landings that they had done. Odd that he’d have left a note rather than a proper log book entry. Anyway it was way too early to phone him at the hotel so I let it slide.

Next day we finished the rest of our pairing ending up back home in Winnipeg, the main company base for Viscount overhaul. I found the incident rather bizarre. How could the flight controls not work for us yet a few hours later perform normally? I agonized over this strange conundrum. One thing was absolutely clear: had we been on a shorter runway, the outcome could have been a disaster. Did ice or snow jam the flexible curtain between the elevator and stabilizer? Did the tail cone drain hole freeze up, altering the centre of gravity? Where were our 12 passengers seated? How was the freight and baggage distributed? Was the spring mechanism that keeps the elevators from drooping on the ground somehow temporarily compromised by the queer weather? Why were there no drain holes in the elevators?

Snow does strange things to airplanes.

Most vexing of all, why did the Viscount seem to drop out, indicating a propensity for a premature stall on previous landings? I’d even briefed Jacques that I would carry an extra ten knots for the approach and landing in Calgary which I did but I was so focused on the actual landing in the crappy weather and runway conditions that I wasn’t trying to finesse the touchdown. There was no drop out. Lots of questions… no answers. I turned in an incident report signed by Jacques the F/O and went home and that was that… or so I thought.

A couple of weeks later I was summoned by the powers that be to discuss the incident. Hah! At last, I thought… all will be revealed and the aforementioned mystery solved. If that was my expectation, I was to be sorely disappointed. As soon as I walked in the door and saw the sombre faces of the local flight operations hierarchy my heart sank.

It was clear from the outset that company managers were just as stymied as I was by the mysterious events yet for reasons known only to themselves they had not shared any of their findings with me. Instead the meeting took on an accusatorial tone. No one had yet had asked for my input. If a proper investigation had been done I wasn’t made aware of the results.

Rather they wanted to focus on why I had rejected the takeoff. What would I have done, they wanted to know, if I’d been taking off in Lethbridge 100 nm to the south with its main runway half the length of the one at Calgary? Never mind that the Lethbridge runway ended at a precipice that dropped into the Old Man River 300 feet below. The answer to that defied any sensible answer. It was obvious we’d be dead. I left the meeting feeling resentful and wondered if my supervisors’ intellects were getting beyond their best before dates.

I expected the worst, but no phone call came nor did even a note appear in my company mailbox when two days later I reported for work. The mystery remained unsolved and I wasn’t about to go asking any more questions… at least not then.

I’m afraid the story indicates poor judgment on my part on several levels which I’m sure are obvious to any experienced pilot. Although the reason why the little Viscount didn’t fly when it shoulda has never been solved in spite of my dogged pursuit over the years, I came to realize that my resentment towards my flight operations managers was misplaced. They were under more pressure to come up with a solution or an answer, more than I was, and way more accountable to a lot more people.