Blog - Latest News
You are here: Home1 / Article Archive2 / I was there3 / Really low on fuel in a thirsty Super Cub 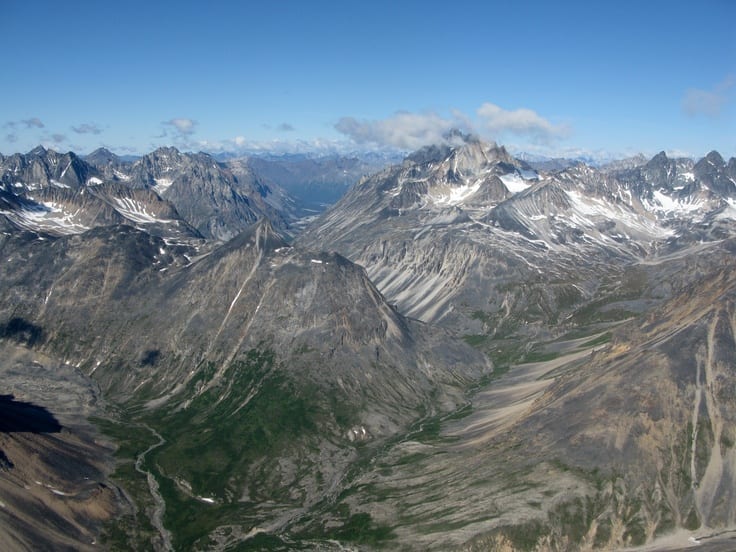 Early in September of 1977, a fellow Alaska Registered Guide asked me to fly some avgas to a hunting camp he operated on the west side of the Alaska Range. On the morning of Wednesday, September 7, I loaded my bigfoot Super Cub and lit out headed west for Merrill Pass and the Stony River country beyond. It was just another trip with an airplane crammed full of 80-octane avgas cans and crates. The 60-gallons of avgas flew in the face of FAA Regulations for such a load, but outback Alaska pilots simply cannot afford to follow that restriction, and tower operators there just watched, without comment, the loading of such quantities of flammable liquids. To interfere with such loadings would mean no more free fishing trips for them, frequently offered because of their most helpful, sensible, and much appreciated service to pilots.

Topping off the tanks is not always an option for Alaska bush pilots.

Three hours and 45 minutes after liftoff from Anchorage’s Merrill Field, I lined up on the guide’s invisible tundra strip for the landing. Big tundra tires don’t leave much of a track in Alaska’s vast bush country, and if I hadn’t known exactly where the guide’s camp was, I’d never have spotted it. The guide operated off floats at a nearby lake, so there were no tracks to see anyway. I off-loaded the avgas and cached it for future use.

The days are short, and quickly getting shorter, in Alaska’s September, and it was nearly dark as I readied my Super Cub for the return flight. It had also started raining, as it usually did during Alaska’s fall hunting seasons.

I’d chamois-filtered some of the guide’s canned avgas into the Cub’s tanks for my return trip, calculating the required quantity closely. My Super Cub had a vernier mixture control and an EGT gauge, so I could lean the fuel/air mixture with considerable accuracy. To have taken more would have meant stealing from the guide’s much needed supply for his own operation. I took from the guide’s avgas cache only what was necessary to make the safe flight back to Merrill Field that night. I carried no reserve fuel. I didn’t like to do that, but sometimes we found it necessary in bush operations.

I took off and climbed out to take up a straight-line course for the west end of Merrill Pass, but darkness and rain had so reduced visibility that I had to give up on that plan right away. I began following the Stony River’s meandering route upstream. That river, and a few nearby lakes, were about all I could make out on the ground. Getting myself as comfortable as possible in the cramped front office of the little Super Cub, I began to unscrew the mixture control, watching both the river and the EGT. The control was threading its way out, but the EGT was showing no change. Strange, since I had already turned the red mixture control knob enough to create at least some increase in exhaust gas temperature. But—fat, dumb and happy—I continued to unscrew the maddeningly ineffective thing. Suddenly, the whole assembly came off in my hand! The bolted connection at the carburetor had failed. I was now without any mixture control at all. Without that leaner mixture, I was in really hot water, and I knew it!

Merrill Pass is considered a bit unfriendly. Many Alaska pilots won’t fly through it even on sunny days. It’s not really as bad as it sounds, but in the dark of a rainy Alaska night, it’s not really a very cheerful place at all. Still, I was now committed. In the rainy dark, I could neither return to, nor land at, the guide’s invisible strip. Only an engine failure would force me to use a Stony River sand bar that dark night. I would just have to punch on through the pass, weighing my options after I’d reached the east end and over the west end of long Chakachamna Lake. From that long, skinny lake onward, it’s pretty much downhill and flatland flying.

Merrill Pass is “not really a very cheerful place” at night in a Super Cub.

After passing tiny Two Lakes, near the west entrance to the mouth of the pass, I could barely see the second canyon branching off 90 degrees to the right, signaling the turn and the required climb from 1200 feet MSL to the required 2400 feet that would see me over the very narrow rock saddle of the pass itself. I was then flying at about 50 feet AGL. I was so busy looking out under each wing that the rain-streaked windshield didn’t bother me at all.

I had made more than 60 trips through this pass, but with peaks rising to 8000 feet just off either wing, slopes too steep to support vegetation, and the volcanic cone of Mt. Spurr rearing up 11000-feet dead ahead, I wasn’t as comfortable as I would have been during a daylight flight. I knew that I had enough fuel to get me through the mountains and out to the Big Susitna River delta before things would go south on me. The 20 minutes beyond that, though, were in serious doubt.

The pass is much too narrow to consider turning around inside, even with a Super Cub, so once in, your options are reduced to going on through or landing steeply uphill and straight ahead. With boulders half the size of modest homes, such a landing was guaranteed to be a bad one, very likely not survivable. The only option from there is simply to fly on through the steep pass, and when a pilot is down to a single option, his future is looking pretty grim.

I crossed the saddle at about 20 feet, rolled into a right 45 degree turn over the skeleton of an old military aircraft, and then began a slow descending left 90 degree turn through the curving little valley that opened onto 20-mile long Chakachamna Lake, six minutes ahead and 1300 feet below me.

When this looks like a good option, you’re in a bad way.

When I reached the east end of Chakachamna, I called Anchorage Radio for information on the oil exploration strip lying 15 degrees to my right and 25 minutes ahead. It was unpaved and unlighted, but it seemed a whole lot better than running out of fuel over the deadly waters of Cook Inlet, or Knik Arm that feeds into it. The strip was a generous 5000 feet long, and I could yawn and ho-hum through a night landing there. Anchorage Radio was discouraging about permission for a landing at Beluga, the private strip in question, so I asked for vectors and straight-line distances to the nearest runway threshold at both Merrill Field and Anchorage International Airport.

Merrill Field was a few miles farther, but a beeline for that field would place me over cold water for only about two and one-half miles. If the engine finally starved out at that point, I could glide to dry land. Direct to Anchorage International would mean crossing about 50 miles of water that the Air Force declared as survivable for only 120 seconds. I chose Merrill, which also gave me several emergency landing options that looked survivable. If I could just coax the thirsty Cub that far.

Once the little red cork ball in a Super Cub’s fuel sight gauge has reached the bottom of the tube, there remains about 20 minutes of flying on that tank. At the Big Susitna River delta, the left tank had run dry, and I had switched to the right tank, where the little cork float already was resting at the bottom of the gauge. It was now becoming a white knuckle flight…

I had long before throttled back to best glide speed plus five, trying to stretch my fuel load as far as it would go. The slower airspeed was maddening but necessary. I needed maximum distance in the air under power. I certainly wasn’t interested in being in the air without power.

Of all the places to land, the water would be worst.

I punched up Approach Control, advised them again of my seriously low fuel situation, and requested whatever help they could give me. They approved a straight-in approach to Merrill Field’s RWY 6, which would save me some air time by avoiding pattern entries and turns. It would also carry me over the major portion of the city of Anchorage, which I didn’t like. I went feet wet at 2000 feet and throttled back for the long, straight-in descent to RWY 6. Merrill Field sits at 139 feet MSL, so I still had plenty of altitude. Passing directly over the city’s many lights was a gorgeous, but definitely white-knuckled, few minutes. And those seemed more like hours and hours of on-the-edge flight.

I landed short, took the first available right, and taxied to the gas pumps. The engine was still purring along, but I didn’t know how.

The Cub’s tanks held a meager 38-gallons when topped off to the filler necks. Not all of that was usable. The meter at the pump read 39.6 gallons, after I had finished topping both tanks. Maybe I had larger tanks by a fat gallon. Maybe the pump was not as accurate as it might have been. I couldn’t have cared less. I’d have paid $50 a gallon for all 39.6 gallons right then.

I tied the little Cub down, gave her one last affectionate pat, and headed home for a hot shower, a warm dinner, and a dry bed.

Oh, yeah—I fixed that broken mixture control problem before the next flight. Flying full rich isn’t my preferred method of engine management, even at sea level. Much less through dark and rainy Merrill Pass…

If you lose control, it’ll ruin your whole day
Scroll to top