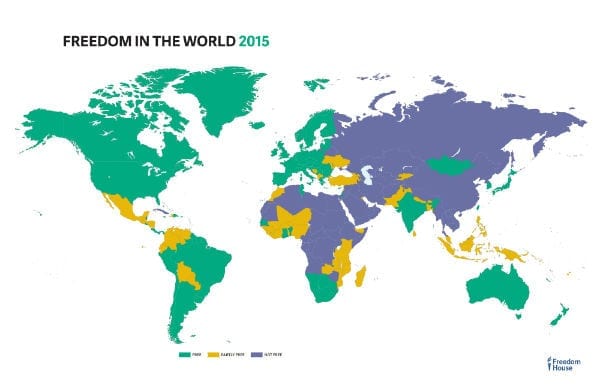 As I write this, France is reeling from devastating terrorist attacks on civilians in Paris, and governments throughout the West are under pressure to “do something,” to apprehend any surviving conspirators, and to prevent future attacks. I think it’s likely that French civil liberties will be further constrained as their government tries to find and neutralize terrorist plotters and collaborators.

An all-too-common sight these days – but why?

As I mulled over the latter point, I thought about the restrictions in American civil liberties that followed the airliner attacks on the World Trade Center and the Pentagon in 2001, particularly the restrictions on general aviation. The restrictions include the virtual elimination of GA flights into Reagan National or within a large area around Washington DC; a constantly shifting pattern of large Temporary Flight Restrictions (TFRs) as high government personnel move around the country; and warrantless stops and searches of GA aircraft by the Customs and Border Patrol.

Then I began to think about the actions of governments at all levels that make personal flight an expensive hassle, starting with dense regulations on aircraft certification, maintenance, repair, and registration; numbing pages of airman regulations; fuel taxes; permanent airspace restrictions; local government harassment of small airports, FBOs, skydiving operations, and aerobatic flights; noise restrictions; and more. Add to this constant pressure on non-commercial airports by tower builders and land developers.

My thoughts turned to the situation of GA in other countries. Some years ago, my wife and I were in The Netherlands visiting her cousins; when one asked what we might want to see, I asked if we could visit a small Dutch airport. The cousin thought for a moment, and said, “I think there is one.” One! Well, there are more, but he only knew of one, and managed to find it, a beautiful, totally unobstructed grass strip. As we drove onto the property, I saw what appeared to be a control tower. We entered the base of the building, finding what had once been a pilot shop, but no one in sight.

A man in the tower cab heard us, and called down to us in Dutch. The cousin responded that he was showing an American pilot the airport. We were invited upstairs, and had a long conversation with the tower operator in English. It turned out that his sole duty was to obtain tail numbers and count takeoffs and landings, so the airmen could be billed by the government for each operation. I did not ask how much an operation cost, but articles I’ve read suggest it might be substantial. Little wonder there were no aircraft movements during the few hours we were on the field in perfect flying weather! It was not clear that the takeoff and landing fees generated came anywhere close to paying the tower operator’s salary and benefits.

I thought also of the young Italian airline pilot I met at a Sport Aviation Association fly-in on Rudy Frasca’s wonderful private airport near Urbana, Illinois, some years ago. This delightful fellow owned an airplane with a few partners, and he complained bitterly about heavy fees and regulations on GA by the Italian government. He said that they had registered their aircraft in Germany, because the German regulations were so much lighter than the Italian! And no one has told me that German regulation of GA is light-handed.

Finally, I thought about where GA flourishes— relatively speaking— and where it does not. It was immediately obvious that there is a correlation between tyrannical government and the absence of personal flight. Russia, China, North Korea, and the Middle Eastern nations come to mind. Only the more-or-less democratic nations have active GA, even if hanging on by a thread: the US and Canada; Australia; Brazil; South Africa; and Western Europe come to mind. But there is great variability among those nations in the tax and regulatory burdens put on GA and the support for aviation infrastructure. Even in the democratic nations, it seems often that governments are doing all they can to strangle GA. In Germany, for example, the $11/gallon for avgas must represent mostly tax. All over, fuel for airplanes is taxed at higher rates than for any other use. Why the special treatment?

Maps of freedom and general aviation activity seem to be related.

When I thought about why GA is distributed so unevenly across the world, and why it is so heavily assaulted by governments at all levels, I wondered if there is something about GA in particular that worries governments. Then it hit me: they don’t like the freedom that flying gives to their citizens. An old friend once wrote to me, “Fear a government that fears its people.” On the other hand, we should respect a government that respects its citizens. So, the more tyrannical and repressive the government, the more they fear their citizens having the freedom of movement afforded by small aircraft; perhaps they fear what might be seen from above by pilots. Maybe they think having the freedom to fly gives airmen bad ideas about freedom in general…

Perhaps we should view freedom of flight as a surrogate for the health of larger individual liberty in a nation, and attacks on GA as attacks on liberty in that broader sense. Perhaps in our efforts to gain support and recognition for personal and small business aircraft ownership and use we should be arguing this point: Free people must have the freedom to fly in what Paul Poberezny often called “the great ocean of air over us.” A recent president claimed that “democracy is on the march worldwide,” but events of the last few decades may suggest otherwise. To the best of my knowledge, Americans have the freest GA system on the globe, but it is ailing and fragile.

As European and American governments struggle to deal with the rise of global terrorism, we must be on guard: GA will be an easy target. Please ponder these things, and let us hear what you think.

Friday Photo: sunrise from an AWACS

An accident waiting to happen – when should you speak up?
Scroll to top