Blog - Latest News
You are here: Home1 / Article Archive2 / Accident Report3 / Accident report – what would you do differently? 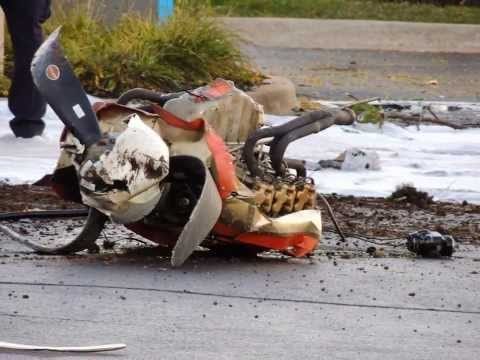 Editor’s note: This article is the first in a regular series where we will examine accident reports. But we hope to do something different here at Air Facts. Instead of just proclaiming Pilot Error and assuming “it couldn’t happen to me,” we hope to use the NTSB reports to become safer pilots. The question we’ll pose each time is: “what will I change about my flying after reading this report?”

Not all accidents happen on dark and stormy nights. The NTSB report for the crash of a Cirrus SR20 outside Chicago in 2013 is a tragic example, as a seemingly normal flight ended in flames. The pilot was landing on runway 18 at Bolingbrook’s Clow Airport (1C5) after a three hour flight from Kentucky, and the weather was quite good, with clear skies and warm temperatures. Winds were from 070 degrees at 8 knots – hardly dangerous, but perhaps a factor given the pilot’s decision to land to the south.

From normal to fatal in seconds.

After a normal arrival into the Chicago area, the 63-year old pilot, who had logged roughly 350 hours of total time, set up for a landing on the 3300 ft. long runway. Things didn’t seem to go well: “the airplane touched down multiple times at least half way down the runway. The airplane was observed to takeoff from the runway and then made a left turn.” It seems as though the pilot attempted a go-around, but lost control shortly after taking off again. The airplane crashed just off the airport property and caught fire, with both the pilot and passenger fatally injured.

How could such a seemingly simple landing, in such a modern airplane, in such good weather, go so terribly wrong? Tellingly, the radar reconstruction shows that “the airplane had an average rate of descent of 1,301 feet per minute and an average ground speed of 117 knots on final approach.” If a good landing begins with a good approach, this airplane never had a chance. But a bad approach does not automatically lead to a fatal crash. When is it too late to start a go-around? How can a go-around be conducted safely?

Like every accident, the pilot did not set out to crash his airplane that day. It was hardly a high risk day, with cooperative weather and an airplane that showed no signs of pre-impact failure. But a combination of decisions and control inputs led to a tragic outcome; an outcome all of us would like to avoid.

Now it’s your turn. What can you learn from this accident? How can you avoid a situation like this? Add a comment below, but follow our three rules:

Out of CG, overweight, at night and in turbulence
Scroll to top