Blog - Latest News
You are here: Home1 / Article Archive2 / I was there3 / It wasn’t my fault – an unusual Alaska accident 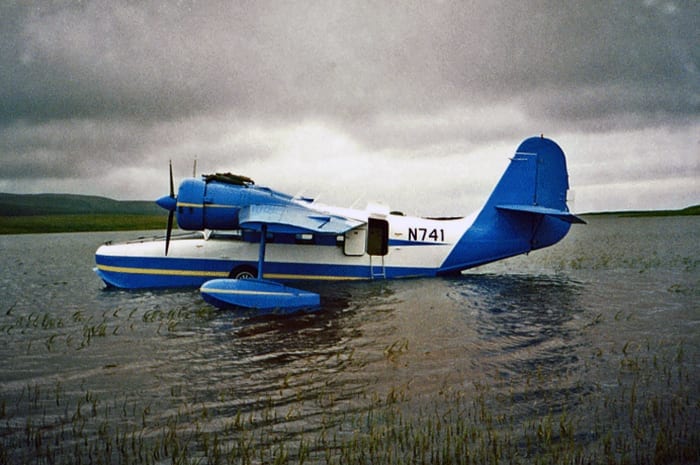 I swear there are some days when a pilot ought to just stay the hell in bed. That was certainly the case with the pilot of an ill-fated Grumman amphibian G-21A, Registration Number N741, at Unalaska, Alaska. The date was April 9, 2008.

Unalaska, I suppose I should tell you, is w-a-a-a-a-a-y out there past the Alaska Peninsula and smack dab in the middle of the Aleutian Islands, breeding grounds for the world’s worst flying and boating weather. The weather, though, can’t be blamed for this doomed flight. And really, it’s pretty hard to blame the pilot, either, though I know there are some out there who forever stand ready to cast the first stone. Anyway, it all happened something like this…

The Grumman is a tough airplane, but even it can’t handle everything.

The Grumman, operated by Peninsula Airways, Inc., serves this bad-weather part of Alaska. It does so by choice, and it does so in spite of some rather awesome weather challenges. This late afternoon flight was being operated as Flight 325, under Peninsula’s CFR Part 135 license. This is the license used by most of Alaska’s Air Taxi operators, both scheduled and non-scheduled flight shops, which, in large part, keep the Alaska outback going. This flight, which began at Akutan Seaplane Base at Akutan, Alaska, had Unalaska as its destination.

I suppose that, before we get too deeply into this tale, you should have a little background into flight operations at Unalaska (Dutch Harbor). I expect your eyes to get a bit wider as you learn about this unique airport environment that, by the way, prohibits nighttime NDB operations for instrument flights.

The Unalaska Airport is a state-owned public airport in the City of Unalaska, and on Amaknak Island, a part of the Aleutian Island chain. It is here that the small crab fishing fleet that you see on your television set in a series entitled Deadliest Catch is headquartered. Located 80 miles south of the Arctic Circle, 800 miles southwest of Anchorage, Alaska, and almost 2,000 miles west of Seattle, Washington, you may consider this as a rather remote location if you want. The residents of Unalaska, of course, don’t really feel that way about it.

In 2002, the airport was renamed to Tom Madsen Airport. That was in honor of Charles Thomas Madsen, Sr., a bush pilot who was killed in an airplane accident that same year. The FAA still refers to it as Unalaska Airport, though, and their accident report number ANCN08FA050 uses that reference.

The runway at Unalaska Airport — yes, there is only one — which is numbered Runway 12 or Runway 30, depending upon whether you are taking off or landing to the northwest (RWY 30) or to the southeast (RWY 12). This single runway is bordered on one side by a steep drop-off into the ocean, 22 feet below, and the steep side of a mountain on the other. Both ends of this 3,900’ long runway drop off sharply into the ocean. If this environment alone isn’t enough to give a pilot reason for at least a little bit of caution during his approach, please read on…

The airport lies between the city of Unalaska itself and the city’s seaport dock facility just north of that little community. Trucks transporting large container vans from the trailer yard to the city docks have to travel by the only route available to them. That means travel along Ballyhoo Road, which runs past the end of the airport’s Runway 30. Since the road is slammed up tight against the end of RWY 30, it was some time ago decided to erect some sort of traffic control device there to more or less protect both incoming aircraft and the big surface-traveling vans. As a result, there are two remotely controlled gates — complete with warning lights — installed there.

Much like the railroad crossing arms that you are used to seeing, these gates, one set at either side of the runway threshold, operate to protect landing traffic at RWY 30. When this gate and warning light system is activated, the Runway End Ientifier Lights (REIL) are also turned on. This whole system was designed to be controlled by the approaching pilot, who merely presses his microphone’s transmit button seven times to turn them on, and three times to later turn them off again. Procedures for this process are outlined in the Alaska Flight Information Supplement. Now to the scenario…

Not your average airport – notice the road that crosses the end of the runway.

As Peninsula Flight 325 approached Unalaska Airport, a 45-foot long trailer van was steaming along Ballyhood Road on his way to the city dock facility. As the driver approached that part of the road that passed beneath the approach path to RWY 30, he noticed that the warning lights were flashing, but that the gates were not down. Still, those lights must have meant something, so he stopped his tractor and trailer, waiting for the lights to stop flashing.

After waiting about 45 seconds, the driver looked to see if he could find any approaching air traffic, but could not. Satisfied that everything was pretty much as it should be, except for those obviously confused flashing lights, he decided to drive on, and, putting his big rig into gear, he once again began moving toward the docks.

A loud BANG, followed by a serious rocking of his rig, told the driver that something was now amiss. His truck had lurched to the right, just in time for the driver to witness the landing airplane slam into the left side of his truck. Aw, horse feathers!

During a post-accident interview, the truck driver stated the following: he had been working in Unalaska for only about four months, but during that time he had learned, as had the other drivers, that the RWY 30 alarm lights would frequently activate without apparent inbound air traffic, and that they would continue to flash even though the gates would not activate. Approaching trucks would, of course, stop in observance of the flashing red warning lights, only to sit there blocking other traffic, which would finally result in quite a delay for everyone.

Based upon this interview information, we learn that the warning lights seem to work, but that the danged gates seem not to work.

An interview with the pilot revealed that he was no greenhorn to this work, and that he had indeed pressed his transmitter button seven times to activate the RWY 30 warning system. More than that, he looked closely and observed that the warning lights were indeed flashing. The gate arms themselves would have been almost impossible to see from the approaching cockpit. One has to think, though, that the pilot should — in all good conscience — be able to rely upon the warning lights, shouldn’t he? Well, obviously not…

Our pilot, as I have said, was no greenhorn at his business, though, and he had clearly observed a large truck stopped quite still on the road, leaving his approach path to RWY 30 clear of obstructions. At this point, quite understandably, the pilot became a bit busy with his flying chores. Prop controls to low pitch, mixtures full rich, gear down, flaps down, trim, trim, trim as power was further reduced and pitch attitude required continuous attention with the different aircraft configurations and a moving center of gravity within the airplane.

The end result wasn’t nearly as bad as it could have been.

But, just as the pilot approached the airport threshold, he noticed that the truck and trailer had started to move forward again! He immediately applied full engine power to both engines and hauled the airplane’s nose up in an attempt to go around. Raising the nose, however, actually lowers the tail for a moment — that appendage being lighter in weight than the front, up there where the engines live — and it was then that the airplane’s belly and tail empennage impacted the now moving truck.

Immediately, all elevator control was lost to the pilot, and his disabled airplane understandably pitched nose down to collide with the runway, sliding down that runway for several hundred feet.

Comes now a representative of Alaska’s Department of Transportation. According to this worthy, the department had been aware of the fact that the gates had been out of service for more than a year. And, due to “budget constraints,” as well as pending equipment upgrades that would see the gates moved to a different site along Ballyhoo Road, nothing had been done to correct this incredibly dangerous situation.

While I know, and am quick to admit, that the pilot is responsible for his airplane and everything in it or on it, I have to think that I’ll accept this pilot’s cry of “It ain’t my fault!” If you want to argue such niceties as (a) the pilot was too low, (b) the pilot should have seen that the gates were up, (c) the truck had the right-of-way, or (d) any other silly argument, I’ll just sit patiently and hear you out. But then I’ll still have to side with the pilot.

For one thing, an Alaska pilot, flying a Grumman Goose amphibian with eight passengers, is aware that the runway ahead is less than 4,000 feet long. He’s also aware that his approach over cold water, while a smooth one, may lead to thermals the moment he crosses the threshold and is over a hot asphalt runway. For this reason, he is very likely ready to touch down on the near end of the runway rather than to allow his airplane to float ahead to a mid-field landing, which will only be hard on the brakes at any rate.

With the belly now badly wrinkled, and the elevators useless, his landing must have been a pretty hard one. In fact, the impact resulted in eight minor injuries, but only one serious injury. All in all, I agree with the pilot: it wasn’t his fault.

Crashes: then and now
Scroll to top