Blog - Latest News
You are here: Home1 / Article Archive2 / I was there3 / The in-flight emergency nobody prepared me for 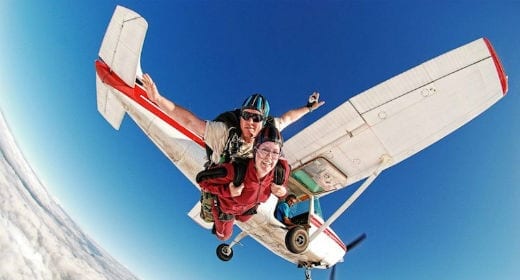 Many years ago I was a pilot for a skydiving operation – a novel experience that came to me strictly by chance. At the time I was an executive in an aircraft repair and maintenance company, and one of my employees was a jumper at that skydiving operation. Both of these “companies” were located in the Washington, DC area. When that employee learned that I was a commercial pilot who, by the way, at that time just flew irregularly to maintain competence – he came to me and said that the skydiving operation was looking for a reliable person to be a standby jump pilot. I felt that I was nothing if not reliable, and the idea of getting to fly jumpers was very intriguing. So I said I was interested, and he arranged for me to get a tryout.

The primary airplanes the jump operation used were models I was very experienced in – they were Cessna 182s – and I even had some input to their configuration as I was involved in the development of the predecessor Model 180. And these 182s were even from that era, being about 30 years old, though that didn’t give me any concern. The owner gave me a check ride in one of those 182s that was about general flying ability, with nothing that I recognized was particularly about skydiving flying – of which I knew nothing. When we landed, he pointed to another 182 standing idly by, and said take that airplane and start flying loads; there are jumpers waiting.

I’m starting with the beginning of this whole thing because it was the time of a somewhat humorous happening that possibly was the most embarrassing thing that ever happened in my flying experiences. I was feeling really great about my piloting capabilities because my check ride was so good I was being put directly into actual operations. (Whatever happened to standby?) I snuggled down smugly in this other 182 and began the starting procedure – except I couldn’t find the starter!

In various Cessna airplanes I had used starters that were keys you turned, levers you pulled, or buttons you pushed, but I couldn’t find any of these things after careful and repeated scanning of the panel and controls. So I got out and sheepishly went to the boss and asked for help in locating that missing control. What he showed me was a button, unmarked, they had placed outside of the glare shield during some modification, where I hadn’t even thought of looking. I tried it and it worked marvelously.

I did take several loads of jumpers that day, I thought successfully, but I guess I had seen too many WWII bombing movies because I flew to jump altitude, away from the jump zone, and made a steady level bombing-like run to it, had my jumpers leave right over the target, and flew leisurely back to the field to enter the pattern. Let me say here that this was the only jump operation I ever flew for, so I don’t know how others did it. But I was informed quite emphatically that this one was a business with lots of paying clients waiting (im)patiently, and I wasn’t to diddle around the sky but was to climb at full power directly to the jump zone, leveling off at the jump altitude, immediately discharge my load and descend rapidly and not enter a pattern but land directly on the runway. That was possible because we jump pilots were in communication with each other and the office, and there was essentially no other traffic at the field, which was the boss’ private airport.

And they think the skydiving is the scary part…

I learned to do these things, and actually to enjoy the somewhat carefree way of flying, and did it for about a year and a half (it seemed longer) before we moved away from the DC area. It might become tedious on summer weekends, when we flew from 9am to 9pm on Saturday and Sunday, and sometimes were even called to fly on Friday evenings. My wife didn’t much like that schedule, which took up most of my non-working time – but I was reliable. Jump altitudes were from 3,000 to 12,000 feet and we were expected to get in three jump loads of three to four people (depending on their size) an hour. We flew with light fuel loads. And we had to eat lunch while flying. It was a business, though we pilots didn’t get paid much (and no overtime) – the others were much younger than me and were building time so they could in the future fly for an airline.

I should add that the jump zone was normally at the airport itself, so divers could gather their gear and walk to the hangar to get ready for the next jump. That was important for the flight that is the real subject of this article, which happened after I became a seasoned skydiving pilot.

The flight in question was a routine one, with three jumpers who wanted to jump from 10,000 feet. I did the usual full-power climb to 10,000 and was right at the jump zone so was ready to reduce power and level off for the jump. Except I couldn’t budge the throttle. I tried everything including bracing myself against structure and pulling as hard as I could, but it wouldn’t move. I turned to the jumpers and said I couldn’t reduce power so their options were to jump right then or ride the airplane down with me. I was alone in about five seconds.

In keeping with the theme of this article, you are schooled in what to do when you lose all power, but nobody ever covered the case when you couldn’t get out of full power. I guess I thought I might be able to do it myself, and wanted to stay in the vicinity of the airport, so I set the prop to the lowest thrust angle and immediately started a 1080 degree spiral, which is something you were taught to do. (I didn’t limit it to 1080 degrees in this case!) I was pulling on the elevator control mightily, was pretty slow, was staying in steep turns and was gradually losing altitude – until I got to about 3,000 feet above the ground, and the airplane wouldn’t descend any more.

We practice engine failures, but what if it fails in the “full” position?

I imagine my jumpers had reported the situation to the boss, and I thought it was time to communicate with the ground to see if we could agree on what to do next and have them prepared to clear the area for me. The boss and I did talk, calmly, and decided to see if reducing the mixture control would have any effect. It didn’t; that is, the power didn’t reduce as you pulled it back – unless you pulled it to the off position, at which time the engine quit. But that did give me some leeway to continue to descend and hopefully get positioned for a dead stick landing. For comfort I would periodically push the mixture control on, just to make sure I could get power, even too much power, when I needed it. The engine would surge back on and I would shut off the fuel again.

Using this on again/off again procedure, I was able to maneuver into a position lined up with the runway and at an altitude at which I could make a pretty normal power-off approach. I shut the fuel off, I hoped for the last time, and made a gliding descent to a landing. I let the airplane roll to a place accessible to the entrance to the runway, because I wasn’t about to try to taxi the airplane with full power on and then off, but wanted someone to come and tow me. They did, without my asking.

It was found that the throttle control had entered, broken and lodged, they said, in the carburetor, and as I very well knew, couldn’t be moved.

So now readers will know at least a couple of ways to deal with the much overlooked “only full power on” emergency if it happens to them. But stay close to the airport.

The art of instrument approaches – 7 tips for proficient flying

Friday Photo: Denali from an Aerostar
Scroll to top