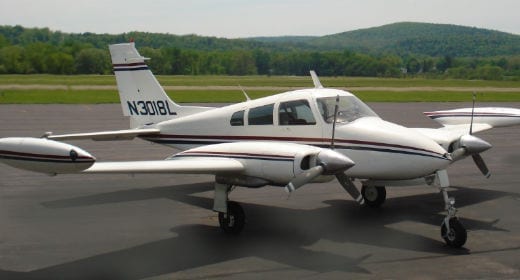 Recently after I have submitted an article to Air Facts, I say to myself, “That’s it, I’m out of topics.” Then some current event, maybe even discovering a 1955 drawing in the garage closet, shocks me into writing another article, usually based on some – in my mind related – long ago event.

The HondaJet features a radical new engine mount – or is it?

This time the current revelation was from an article in The Wall Street Journal on the Honda Model HA420 Jet – hereafter just called the HondaJet. I had not been following the development of this very modern airplane, but the sketch and photo of it in the article looked eerily similar to at least one version of the Cessna Fanjet 310 I had once worked on.

I can date that precisely because it was the fall semester of 1951, that of my senior year in college, and I was only working part time in Cessna’s Flight Test, Aerodynamics and Preliminary Design group. (I became full time in January 1952, because Cessna decided to bid on an Air Force trainer, later to become the twin jet T-37, and needed more of my time in doing it.) But the project, that fall, of the Fanjet 310 was definitely not one of my own conceptual pet projects, because in my initial, part-time employment I was just doing whatever I was told to do.

I had already been told to do some analysis of both performance and stability based on the wind tunnel testing of the Model 310, but the Cessna twin was still over a year away from first flight. Then the idea of looking at a fanjet version of the aircraft came from somewhere, I know not where, and – perhaps because I was then already familiar with the design – I was told to do the aerodynamics analysis of the idea. This was to be somewhat difficult because there were few if any fanjet engines in work and certainly none in the size we needed to be compatible with the 310. Another important consideration given for the evaluation was to use, or save, as much as possible of that soon-to-be 310 airframe and configuration in the suggested fanjet application.

The 310 featured tip tanks – could those become winglets?

Let me pause and say that such sort of obscure, and likely short-lived, undertakings like the fanjet 310 project being described will not be remembered even by those who are working alongside it, but who are absorbed in other more immediate and perhaps important things – like flight test results. In the after years when you try to tell them of the obscure project you did, they will say your memory is wrong, that could never have happened back then, and you’re likely mixing that up with a bunch of other real things that took place.

But on this one I have the evidence that my memory of it is absolutely correct, because in sorting through a stack of information that had been saved, I came across the memo transmitting the results of the fanjet 310 “study” to engineering upper management. The memo is dated December, 1951, but is a little strange first of all because the sender is identified only by a set of initials, but they are the initials of the person in charge of the preliminary design section of our group. Maybe things were just less formal in those early days (I didn’t send memos back then).

A little more about that memo will be described later, but as an important aside there did not seem to be any drawings, or even sketches, accompanying it, at least none are mentioned. Not attaching some illustrations of the configurations reported on to help management picture the results of the study is part of the overall strangeness of the memo. Maybe the author was just being elusive.

The T-37 featured another approach to engine mounting: in the wing root.

The project considered three placements of the “invented” fanjet engines on the “existing” 310 design: 1) mounted on the fuselage 2) located at the wing root–fuselage intersection (the actual configuration on the yet to come T-37, but they were pure jet engines), and 3) mounted on pedestals on the top of the wing – the HondaJet way. It and the 310 are low wing configurations, so engines hung on even short struts below the wing were not practical.

Configuration 3 was reported as preferred and on the 310 configuration the pedestal for the fan engines were placed, spanwise, just about where the recip engines on the prop airplane were – in best keeping with the idea of minimum change to the basic 310 airframe. I’ll discuss following this how I generated/invented the fan engines, but other than meeting the minimum change criteria the pedestal-pod idea was not bad, but I felt was not the best selection from an aerodynamic standpoint because of interfering with the flow over the top of the wing, and though helpful from a stability standpoint at lower speeds presented a high thrust moment to counteract in the pitch direction. I’m not sure I even considered yawing moments created by the engines because they would have been similar to those of the 310 prop engines. But the pedestal pod mounted engines would add twisting moments to the wing structure – only a thought, and not part of my assigned concerns.

The HondaJet designers prefer the above-the-wing pedestal arrangement because of the favorable, from a drag standpoint, interference of it with the wing flow in the high speed, compressibility range, which mix they say delays the onset of shock waves. So the HondaJet and that proposed best Fanjet 310 have the same engine placement concept but for greatly different reasons – the HondaJet for improved performance, and the Fanjet 310 for minimum disruption to the original, and hopefully continuing, configuration.

Actually I remember mostly that pedestal-pod option and little of the others, and I think we did have a primitive three-view of the former, but as stated above it was not forwarded with the reporting memo. Here’s where I deviated a little from the minimum change limitation, and suggested a slight sweepback to the 310 wing, just for the appearance of speed. I think we also drew that up but it, too, remained undistributed and you’ll just have to imagine a 310 with modest sized fan engines on pods above the wings, and with a little sweepback in those wings.

But that configuration was the one mostly resembling the HondaJet. This is in part because we also retained the popular 310 wing tip tank arrangement and, especially with the tilted tanks on later 310 models, sort of mimicked the HondaJet winglets.

The existing engine closest to what we could accommodate on the fanjet 310 was a French turboshaft design that was in development – and after development was produced for sale in aviation applications in the U.S. by the Continental engine company. While it was still “experimental,” it was demonstrated as a turboprop with a propeller shroud, in our (maybe my) view simulating a very high bypass ratio fanjet. We wanted a lower bypass ratio that would be better at the higher speeds we hoped to attain on our 310 version.

Although the data available to us was minimal, I used the “rubberized” engine approach to predict how it would function as a low bypass configuration by ratioing parameters according to basic principles – to obtain at least an estimate of thrust and fuel flow for our “mission.”

Contrary to the HondaJet, we didn’t have to worry about compressibility effects on the Fanjet 310. It was optimistically expected to be slightly faster than our production 310 – with this phantom engine and with or without a mild sweep on the wing – but certainly was not in the jet airplane performance category as perceived even the 1950s.

So what did the memo reporting on our project say? Not much. It just seemed to recite in an abbreviated form what was considered, what was limited by the state of the information, and a little on the performance of what was thought to be the best of the options. It was a circumscribed description of the activity and results, and was very non-committal – without even a hint of a recommendation. I guess that was enough – I never heard about it again. But what we conjured up over half a century ago sure looked a lot like that swell looking, high performance HondaJet just reported on in the Wall Street Journal!

Here is a post script on that five-month period in late 1951, some of it included in a comment by me on a previous Air Facts article:

I didn’t know, yet, enough about Cessna to guess whether the requested fanjet 310 configuration would warrant further consideration. It apparently didn’t, and maybe the next item helps explains it.

Cessna would go on to ship a jet airplane, but it didn’t have engines mounted to the wings.

I was surprised when Cessna, just in the month following the period, decided to propose on the seemingly exotic (for Cessna) Air Force TX trainer requirement, and wondered how “we” would compete against behemoths like North American. That was daring, and turned out OK, because the result was the long lived Cessna T-37.

During the period I also explored, with another “created/rubberized” engine, what a turboprop 310 would be like. That, somewhat later, was a realized derivative for Cessna (under a model number change). But observant readers will note that what might be considered Cessna’s production version of the fanjet 310, the Citation jet of the late 1960s, used the fuselage mounted engine configuration that was not the favorite of our 1951 study.

The Citation was successful anyway, so with the other fanjet 310 pylon-pod configuration also as a prospective, though distant, forerunner, maybe the HondaJet will be a success too.

Cessna during the glory days – a test pilot’s daughter remember...
Scroll to top