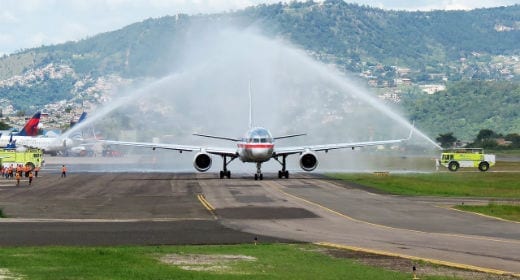 It was a good run, but it’s over. Today, I closed the door to hangar 508-7 for the last time, without my beloved Light Sport-eligible Aeronca Chief behind it, and there will be no airplane to replace it. The Chief has been sold to a fine officer-and-gentleman from North Carolina, who seems as passionate about the airplane as I have been.

Not all pilots go out in style like this, but it’s always a significant event.

We all know the day will come when we will fly as PIC no more, whether because we keel over dead, get too sick to pass the medical, feel that our skills have deteriorated irreversibly, burn out on aviation, or simply run out of money. For me, a combination of factors added up to an important question. That is, if I had a friend, my age, who had all my various issues, would I let him take my grandsons up in his old airplane? And sadly, reluctantly, I came to the answer: no. Any other answer would be selfish and hypocritical.

Non-aviation types I’ve told of this decision respond flippantly: oh, too bad, no big deal. They have no idea how big a deal this is. As I’ve written before, I only hold a private license, SEL/I, and never made a dime from flying. I will never even hit 1,000 hours, a long-time goal. Yet aviation has filled a huge space in my life, beginning with all those balsa quick-builds of grade school days, the ukies later on, the family airport visits, the endless reading of aviation books and magazines, and finally the decision in midlife to take up flying and aircraft ownership. I am startled now to face how much of my mental and emotional life and energy have been tied up in all facets of aviation, and how much of my time: there is a big hole to fill. (Fortunately, the monetary hole of aircraft ownership will now begin to refill itself!)

After getting used to being an “ex-pilot,” I expect that I will look back on nearly 35 years of holding an airman certificate with gratitude and many warm memories. It is an incredible privilege to have owned and enjoyed two old airplanes, to have met and known so many fine airmen and -women, both famous and ordinary, to have served the general aviation community through my work with the EAA and my writing, to have seen what only airmen see from our mobile perches. Surely, however, the most important thing of all is the many bonds of friendship formed through our common interest in Things That Fly. “Airplane people” really do seem special to me. Maybe aficionados of hot rods or old British roadsters, or pre-WWII tractors or antique dolls have a similar kinship, but somehow the brother- and sisterhood of aviators feels unique.

Hunter Heath at 13. An enthusiast from the start.

How or if I will be involved in aviation from now on is uncertain. Losing my identity as a pilot may suck much of the joy from the activity; hangar flying is fun, especially when one has an airplane and is making new adventures. But perhaps now talking about flying will seem a bit like talking about having sex. Worse still, maybe it will be like talking about having sex with a condom on! I’ll give it time. There are some obligations to fulfill around my EAA chapter’s annual summer fly-in event. Maybe interest in radio-controlled models will offer a new avenue. Maybe I’ll buy or build an ultralight and fly free of regulation; after all, just being airborne has always been a joy. Give it time. Give it time.

Now, I am thinking about the readers of this journal. From direct statements and hints, I suspect that many of you are no longer flying, or not much. For those of you who are still active, I beg of you: if you have a plane, and don’t fly it much, shame on you. Don’t let it rot, fly it! Split the cost of fuel or take in a partner, do whatever you have to do to make it possible to fly (that excludes felonious activity!). If you’re a renter, find a plane you like and fly as much has you can afford; maybe you can get a discount if you commit to a certain amount of time. If you are going to fly “someday,” let that someday be soon. You just never know how much time is left in which to do it.

I have some regrets about my involvement in aviation. Some people I knew have died in airplanes when it didn’t have to happen. I didn’t give as much back to aviation as it gave to me. I didn’t become as skilled a pilot as I wished, and I never took any aerobatic training. My tailwheel skills never came up to my standards, much less those of my instructors. But more than anything, I regret that I didn’t take up flying sooner (especially missing the chance to get my license very cheaply in the Army), and that I had such a long hiatus from flying due to job demands and moves. But enough of the view through the Retrospectoscope: the good vastly outweighs the bad and the regrettable.

I hope those of you with some gray hair (or simply some hair!) who are still flying will spend some time thinking about your future, even as you enjoy the present. Richard Collins has set us a good example. Your time will come, and you need to think about how and when you will draw the line, and how you will handle being an “ex.” Ask yourself the question I posed in the second paragraph. Please do not be one of those pilots long past his sell-by date who fudges his medical application, or flies without a medical when one is required, or foolishly flies beyond his or her own mental, physical, training, or health limitations. If you are going to be only looking up at airplanes, let it be from the green side of the grass.

As Paul Poberezny famously said many times, “I came to aviation for the airplanes, and stayed for the people.” Still… three-niner-six-seven-Lima and three-one-five-four-Echo, I’ll never forget you. Thanks for the ride.

Flying with no “out” – between a rock and a hard place

A Luscombe without wings – taming the Stearman
Scroll to top