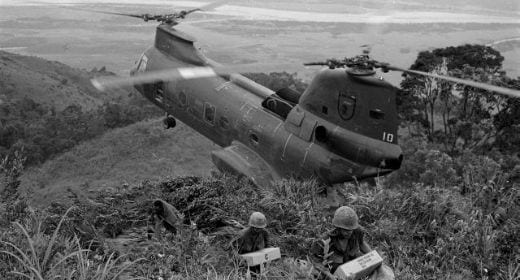 Luxury hotels line the idyllic beach today. Forty-eight years ago, it was a bare sugar white expanse of sand and surf and the site of our crude Marine Corps helicopter base known as Marble Mountain Air Facility just east of Da Nang by the South China Sea. It was named after two marble peaks spiking above the coastal plain a few miles to the south. Marines just called the place “Marble.” Sand-bagged bunkers and barbed concertina wire ringed the base. Inside, olive drab tents and   corrugated metal buildings straddled the short, metal slab Marsden matted runway and ramp. Our Marine CH-46 helicopter squadron had flown ashore ten days earlier after steaming halfway around the world on an aircraft carrier from Norfolk, Virginia.

That day in May 1966, I was Joe’s copilot assigned to resupply a marine observation post atop Dong Den mountain about five miles northwest of Da Nang. Rising nearly 2900 feet above sea level, the summit afforded sweeping views of the highlands and coastal plain around Da Nang. In our transport helicopter squadron, pilots paired up. I had been Joe’s copilot in the U.S. for the last six months fresh from Naval flight training. He was a Naval Academy graduate unlike me who joined the Marines as a stepping stone to the airlines and was in Vietnam largely because of poor timing. Joe was precise, disciplined, short-fused, quick to vent at the slightest operational frustration or any aeronautical missteps on my part. I did the best I could to meet his demanding expectations, crisply responding to radio communications, navigating to jungle shrouded villages, along rivers, through mountain valleys,   computing loads, running checklists, and when Joe deemed my skills matched the mission, actually doing some flying.

Around eight o’clock in the morning, with the sun beating down and the day getting hotter by the minute, we lifted off with troops and supplies climbing toward Don Den’s summit with our wingman in another CH-46 trailing behind in a loose, tactical left echelon formation. Generally in Vietnam it was common practice to fly at least in pairs or greater numbers for safety. Air blowing through open cockpit windows, gun hatches and the aft cargo ramp provided some cooling. Still, it was uncomfortably warm in the cockpit cocooned as we were in armored seats, fire retardant flight suits and gloves, boots, helmets, survival vests, body armor and of course our individual weapons and ammunition.

I radioed the mountain-top outpost requesting smoke to assess wind direction and speed. Helicopter pilots prefer landing directly into the wind which adds lift to rotor blades, reducing the power needed to hover. The Marines complied, tossing a smoke grenade into the middle of the small leveled off ground near the summit. Thick red smoke billowed lazily downwind off the peak indicating light winds and smooth air, ideal for a mountain-top landing. I completed the landing checklist, setting the main landing gear brakes and locking the nose wheel so we wouldn’t roll or swivel around after touching down. The mountain-top clearing was very small, barely large enough to accommodate the fuselage’s nearly 45-foot length and 15-foot width.

Joe approached the peak in a slow, shallow descent, bringing the CH-46 to a hover a few feet above the ground with the grenade still billowing smoke beneath us.   As we descended the last few feet to touchdown, almost like a lover’s caress, a thin red smoke stream swept through the open cockpit windows then quickly thickened, obscuring everything inside and outside.

Landing on mountain tops happened all the time, but that doesn’t mean it was easy.

In that instant Joe had to make a decision; pull up blindly, hoping the smoke would clear enough to safely fly off the summit, or descend blindly the last foot or two to touchdown. No time for discussion. A second or two later, my helmet slammed against the window frame and I was violently forced against my seat belt and shoulder harness. Joe had chosen to land. When the smoke cleared and the motion stopped, we hung nearly inverted, constrained only by our seat belts and shoulder harnesses. In the few seconds we were blinded by the smoke, the helicopter had drifted right a few feet and the right main landing gear was no longer on level ground. With nothing but air beneath the right wheels, the helicopter tipped over, rolling off the leveled clearing and coming to rest nearly inverted, about 20 feet below the summit hung up on the tall stumps of trees which Marines cut away to provide better fields of fire.

Fearing a post-crash fire, my first instinct was escape. I released my seat belt, falling partially on Joe who, to my bafflement, just hung there in his very regimented way, methodically securing cockpit switches. Instinctively, I blurted: “Excuse me, Joe, ” then crawled quickly through the cockpit’s inverted passageway to the main cabin, looking for a way out. Our crew chief and gunner and the passengers had by then already escaped and were nowhere in sight. Moving along the cabin ceiling I made my way to the open aft ramp hatch but looking out it was a big drop to the mountainside. Making my way forward, I noticed the port machine gun had fallen away from its hatch providing a small crawl space between the fuselage and mountainside. By then Joe had entered the main cabin and we made our way through the hatch and crawled up to the flat landing area. Amazingly, no one was seriously injured. The helicopter lay wrecked below us, its twin turbine engines still whirring down.

Peering down at the wreckage, Joe began making notes. Trying to put the best spin on what had just occurred I said: “The main thing is nobody got hurt.” He said nothing, just kept scribbling. Leaving him to his notes, I walked off from the clearing and defensive positions and scrambled up a shallow incline to Dong Den’s summit and a short way down the other side. Standing there on the opposite slope looking east was like entering a world of tranquility. A sweet jungle scented breeze wafted over the crest. Deep green jungle canopy spread down the slope to the winding river valley below. In the distance, the city of Dang with its old French villas arced around Da Nang bay and beyond it the high outcropping we called Monkey Mountain, jutted into the South China Sea. I took a deep breath and just stood there, taking it all in. Then sounds of popping rotors and turbine engines broke the spell. Our wingman was approaching to land and take us back to Marble and the war.

We had been “in country” less than a fortnight and it was the squadron’s first loss. More would follow in short order for all the reasons that happen in war: enemy action, mechanical failure, human error, tactical missteps, and the best intentions that lead to disaster, like the simple act of marking a landing zone with a smoke grenade. Shifting snow and the point of no return
Scroll to top