Blog - Latest News
You are here: Home1 / Article Archive2 / I was there3 / From Vietnam to Kobe Bryant—the long history of flying helicopters in f... 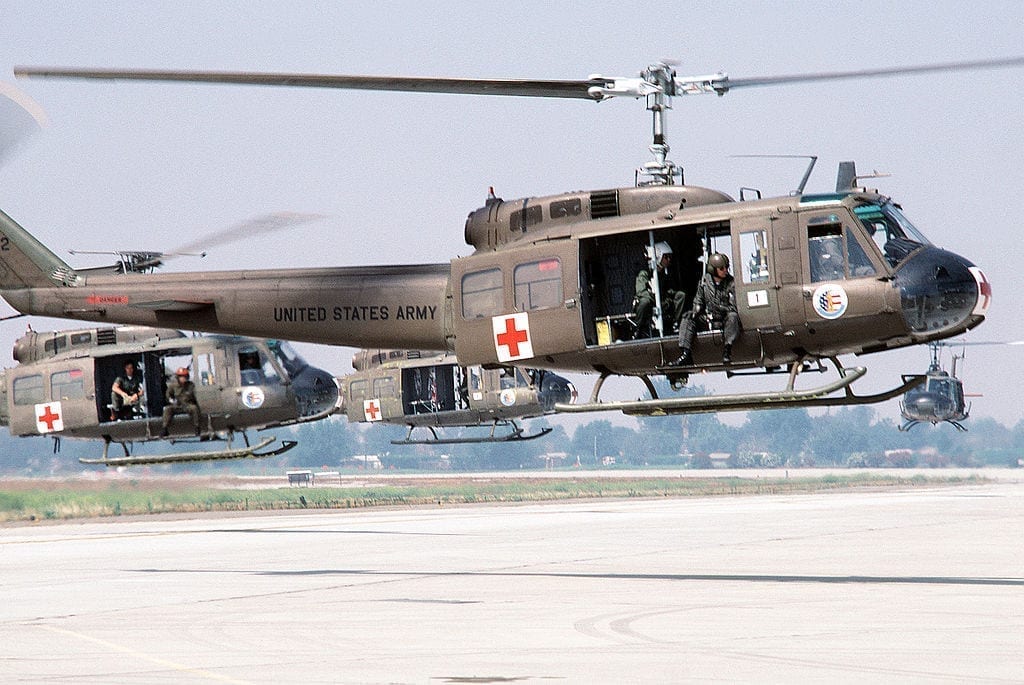 Preliminary findings in Kobe Bryant’s helicopter crash tell me things haven’t changed much in over a half century. Today, as back then, instrument rated pilots flying IFR capable helicopters continue to tempt fate by pressing ahead at low altitude in low visibility. And mostly they make it to their destination! But it’s an insidious gamble, particularly in hilly areas.

The last seconds before impact are as you might imagine: one moment the ground is visible, suddenly it isn’t and just before impact, sometimes it is. It nearly happened to me in the late 1980s but it wasn’t the ground that disappeared, but a formation of Army UH-1H medevac helicopters returning from two weeks of reserve duty. What we did to survive is as valid today as it was in the past.

The four ship Huey flight took off in a loose trail formation, headed north toward Richmond International Airport in low VFR weather. Normally we flew with two pilots but a shortage of crews required that some Hueys, including mine, had only one pilot with a crew chief in the copilot’s seat.

Hueys are typically flown VFR, even when the weather isn’t great.

My Huey was the last in the formation. As clouds lowered and visibility decreased, the formation drew closer together. The leader pressed ahead and descended to about 200 feet above a forested countryside. As the mist grew thicker it momentarily obscured the helicopter about 75 feet ahead, then the helicopter completely disappeared.

Army Huey manuals had no standardized procedures for how pilots in formation should react in such situations and there was no preflight briefing for that possibility. But as a former naval aviator, a page in the emergency section of a Marine CH-46 flight manual flashed in front of me. Turn away from the formation and climb!

According to the manual, the amount of heading and altitude change depended on one’s position in the formation. Altitude changes were in 200 foot ascending increments so in a flight of four, the trailing three aircraft would end up 200, 400, and 600 feet above the leader. But this was the Army, not the Marines, and we were in a trail formation, not a tactical left-right echelon formation, which was more common in Marine flights. It was time to instantly ad lib!

I turned thirty degrees right and pulled in maximum collective torque, climbing steeply while transmitting my heading on the flight’s common FM frequency. The number three helicopter replied that he (a helicopter instrument-rated commercial pilot) was also climbing and gave me his heading. I instructed my crew chief to dial in 7700 (the universal emergency code) on the transponder to alert air traffic controllers that we were bursting into their controlled airspace and, pointing to the VHF radio, I told the crew chief to dial in 121.5 (the emergency VHF frequency).

An air traffic controller replied immediately and asked me to squawk ident. After we were identified, he gave me a transponder code and VHF frequency and cleared me to an altitude and heading for vectors to Richmond. I transmitted the new frequency on FM to the number three helicopter and he switched over to contact ATC.

Now level at the assigned altitude and on vectors for an ILS approach to Richmond’s runway 2 (if I recall correctly), the next step was digging out the approach chart from my helmet bag. That was another job for the crew chief because with no copilot, I had to do the flying. The Huey has no stability system and if left unattended for even a short time, it will diverge from stable flight unpredictably. The sergeant eventually found the FLIP approach chart booklet and paged through it to locate Richmond’s ILS 2 approach procedure.

Most Army UH-1H helicopters had only a single LF/ADF and VOR receiver and none had autopilots or flight directors. But the Army made an exception for medevac helicopters and added an ILS receiver. With no flight director, the approach would be “raw data” or “barefoot” as we called it in the airlines. I had the crew chief dial in the ILS frequency and read me the missed approach procedure and I set the CDI to the inbound course.

This is considered “good VFR” by some helicopter pilots.

In the Boeings and Airbuses I flew in my civilian job, final approach speed was generally in the 125 to 145 knot range, depending on gross weight and weather conditions. The localizer and glideslope had to be tracked very closely in order to land safely in the touchdown zone. In low visibility, company policy dictated a coupled approach, letting the autopilot do all the work down to the threshold.

For those planes with auto-land, auto throttles, auto-spoilers and auto brakes, automation did everything. Usually we disconnect the automation rolling out below 60 knots but the autopilot could be left engaged while auto brakes brought the plane to a full stop on the runway.

In Hueys, things happened more slowly and with a lot less complexity. Generally, we ambled down the glideslope around 80 knots. Being slightly high, low or a bit offset left or right was easily corrected at minimums. Then it was simply a matter of air taxiing up the runway to a convenient turn off to the ramp. That day, tracking the localizer and glideslope in light winds presented no challenges and we broke out at about 300 to 400 feet with the runway straight ahead. A few minutes later, helicopter number three, following behind me on the ILS, emerged from the overcast and landed.

To my surprise, helicopters one and two somehow stayed together in the fog, making their way just above the trees to Richmond Airport and they were waiting for us when we landed. Fortunately for them, the countryside was relatively flat and there were no tall power lines stretching across their path to snatch them out of the sky. As I mentioned in the beginning, helicopter pilots are mostly successful picking their way along in low visibility and nothing much has changed in over 50 years.

Here’s what I recall of two controlled flight into terrain (CFIT) accidents from that time long ago.

On October 6, 1966 our Marine CH-46 helicopter squadron and sister squadron based at Marble Mountain Air Facility, adjacent to Da Nang, fruitlessly searched for a CH-46 that went missing the night before. The helicopter departed Phu Bai airfield about 40 miles north of Da Nang, flying beneath a low cloud deck. The aircraft commander could have gotten an instrument clearance and radar following with vectors for a TACAN approach to Marble Mountain but chose instead to fly low, following the mountainous coastline south to the base.

The wreckage and bodies were discovered in January 1969, according to official Marine Corps records, at a rumored location (because wreckage coordinates didn’t match wartime charts) near the Hai Van Mountain Pass a few miles north of Da Nang. Because of the ongoing war, there was no formal accident investigation following the discovery but there were no reports of any obvious mechanical failure. The only known facts: it was night, there were low ceilings, and there was no received distress transmission.

The terrain in Vietnam was terribly unforgiving.

On February 2, 1967, in the highlands about 10 miles northwest of Phu Bai, I landed in a mountain clearing adjacent to the wreckage of a Marine CH-34 that crashed and burned on a hillside. The pilots were making their way through the misty hills and rather than climbing and aborting the mission, they decided to press on. My mission on that clear morning a day after the accident was to remove a Marine on the recovery team who had been killed in the zone by enemy fire.

Both crews were flying fairly advanced helicopters for their day and the pilots were instrument rated. The CH-46 and CH-34 had TACAN and ADF navigation receivers and what fixed wing pilots would describe as a basic autopilot capable of holding heading and altitude. In theory, both crews could have climbed and gotten vectors for an approach back to base. But in practice, the CH-34 pilots on a tactical mission, navigating through the mist with 1:50,000 terrain charts at low altitude, the idea of climbing steeply likely never crossed their minds. On the other hand, the CH-46 pilots repositioning non-tactically from Phu Bai airport to Marble Mountain could have just as easily made the trip under IFR.

Underlying those long ago accidents and the Kobe Bryant crash is the fact that helicopter pilots are comfortable flying at low altitude in low visibility. And as long as pilots fly in marginal VFR conditions, there will continue to be CFIT helicopter accidents. Those operators with well equipped IFR capable helicopters flown by instrument rated pilots with SOPs requiring IFR in marginal weather will fare much better.

Go or No Go: a windy trip

Dreams may fade, but they don’t have to die
Scroll to top