Blog - Latest News
You are here: Home1 / Article Archive2 / My Adventure3 / Back to Africa

KOSRUE, Ivory Coast – “We never fly too much above 500 feet around here,” Michelle said as we began the climbout from the grass strip at the Kosrue Aero Club. “I know it seems low but remember we don’t have any mountains to worry about.”

All the same, the thick canopy of trees below and the three miles of open water in the Ebrie lagoon ahead had me itching for a little more air under the wheels of the club’s Cessna 172. But that may have been more a case of wishful thinking than good judgment for I knew West African pilots had better be over an airport if they lose an engine.

The Ebrie lagoon is an intimidating body of water for pilots.

In the coastal strip which runs westward from Ivory Coast’s main city, Abidjan, there are only two grass strips in 100 miles. To add even more interest, there are only a handful of open spaces of any size in the more than 1000-mile long forested belt that runs along the bottom of the West African bulge. If you’re looking for exotic adventures in aviation, you’ve gotta be aware of the risks. I knew, but the knowledge didn’t make me feel much better.

I was in Ivory Coast at the invitation of a friend who asked me to be godfather to his newborn son. The visit gave me the chance to see again the many friends I had made during the four years I lived and worked there as a freelance journalist. It also gave me a chance to make the circle complete and go flying again with Michelle Cotte, the woman who, almost a year earlier, inspired me to learn to fly.

The days before my return trip were full of anticipation and, I must admit, a certain amount of pride since this time I’d be able to wave my newly minted pilot’s license at her. I was dying to show her what I’d learned and, I guess, I hoped she’d be proud.

Michelle and her husband Yves live in the forest among rubber and palm plantations near the saltwater lagoon that runs for hundreds of miles along the West African coast. Both are experienced pilots though Yves’ duties running a palm oil processing plant and developing a commercial shrimp farm don’t allow him much time to fly either the 172 or the Piper Warrior which belong to the club. But Michelle has taken advantage of her situation and has built up more than 3000 hours flying over the wild coast with its roaring surf and the marshy lagoons with their colorful wildlife.

Perhaps that’s what I admire most about Michelle. While many ex-patriates living in such a remote area often grow bored and bitter about life, Michelle has only grown. An innate curiosity blossomed into a full-blown passion for the natural world around her. Her love of flying is just as profound.

Both interests have led her to become one of West Africa’s only experts on the rapidly diminishing elephant population. For, in the past ten years, her almost daily flights over the Azagny National Park have allowed her to witness the near destruction of one of the last herds of Africa’s forest elephants. I met Michelle while doing a story on the disappearing elephants of Ivory Coast. Her knowledge of the subject and her flying skills make her an indispensable source for anyone interested in the subject. Though our flight would allow us a glimpse of the 43 elephants still living in the park, my main goal was to fly.

The weather could not have been better.

It was a rare day for equatorial Africa. A heavy rain the night before had cleared out some of the moisture so the normal, almost perpetual haze was gone. The sky could almost pass for blue and the visibility had to be 10 miles or more. The only clouds were puffy, white and rare and even those were at least 1000 feet above us.

I was flying from the right seat, a requirement from the Ivorian government since, although my U.S. license was recognized there was also a stipulation that the pilot in command had to fly from the left seat and that pilot had to have an Ivorian license. When in Rome, so to speak.

While I was puzzling over that baffling logic Michelle began calling out points of interest.

First the village of Tiegba slid under our main gear. Almost the entire village of several hundred fishermen and their families sits suspended on stilts out over the lagoon. It was late afternoon and most of the men had come home from the sea. Their unattended dugout canoes bobbed gently in the reflected glow of the fading sun as we circled overhead then were lost to our sight as we banked westward to the park.

Azagny Park is a self-contained, almost circular, combination of salt marsh and forest. From the air, it first looks like savannah but as we glided above the swaying vegetation, a periodic twinkle would give away the presence of the two- to four-foot deep water hidden by the vegetation.

“There, to the left,” Michelle shouted above the engine’s roar. “See him?”

I looked past her out the window, squinting into the sun. At first I saw nothing… then a flash of light and there he was. Magnificently indifferent to the big mechanical gnat that buzzed over him, he tossed his head up and down dislodging the dirt from the clump of pandanus leaves he was chewing.

Elephants are an increasingly rare sight in Ivory Coast.

“Here, I’ll take it,” she said and almost instantly we were swooping out of the sky and back down toward the marsh. Effortlessly, with one eye on her prey and the other constantly gauging the height above the ground, Michelle swept us along in delirious, soaring flight. Her feel for the controls was magic. She made no demands on the plane that Mr. Cessna had not anticipated, but I’m sure she got performance he may have never dreamed of. For Michelle’s 172 seemed alive, as alive and responsive as any thoroughbred in the hands of a gifted jockey.

“There, see the big notch on the bottom part of his left ear?” she asked as she maneuvered into position so I could have a better look. “I haven’t seen him in months and was beginning to wonder. At least he’s still alive.”

“Here, you take it again,” she said releasing her hold on the reins. “But take us back up a couple hundred feet so we can see better. It was just around here last week that I saw what I thought was a new birth. I’d really like to confirm it if we can.”

I took the controls, carefully shoved the throttle forward and became painfully aware of the huge difference in our skills. Where seconds before we had wheeled and soared effortlessly above the park, we were now once again only a 172 with a novice pilot at the controls awkwardly climbing in the humid air.

The remainder of our flight revealed more marvels of the natural world as we spotted several other big tuskers and dropped down to view herds of 50 to 100 buffalo that share the park with the elephants. The blue herons who stalk the marsh along with the kingfishers and kites who joined us up higher to enjoy the view, added fabulous spice to what we had seen. But it was getting late and Michelle had another flight scheduled so regretfully we headed back so she would have time for one more trip before dark.

As we sat down on the neatly manicured grass runway, I was filled with melancholy. There was still a trace of exhilaration for surely no one could be unmoved after having flown in that free, intoxicating way I had just experienced with Michelle. But I also felt sadness. For I knew that in two days I would be leaving Ivory Coast and would probably never come back. And I knew too, that no matter how many hours I’ll log in the years to come I’ll never have Michelle’s touch.

I could see that she knew it too. I knew I hadn’t impressed her with my flying. I shouldn’t have expected to. She waved good bye, said she hoped to see me again sometime and then turned to greet the three French tourists who had come for a look at the elephants.

I stood watching her taxi out for the last flight that day feeling much the way a race track groom must feel when he turns over the reins of the thoroughbred to the jockey. Skills enough to take the Cessna around the patch but not enough to really make it fly. 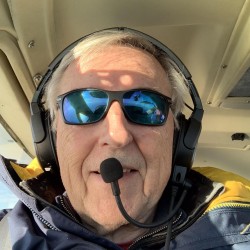 The descent: enjoying the ride down
Scroll to top