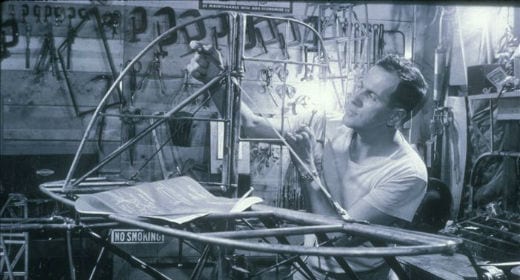 A truly remarkable contributor to GA

I had heard a lot about Paul Poberezny when I attended my first EAA fly-in but had never met him. The year was 1968 and I was still working for the old AIR FACTS. The event was held at Rockford, Illinois, at the time and seemed to me like a larger version of a typical small town summer fly-in.

Paul Poberezny flew over 500 airplanes in his long career, including the P-51 Mustang.

Store-bought airplanes were in a minority and there were from few to no warbirds, classics or antiques. I don’t remember there being an air show. It was mainly a gathering of homebuilders and most of the talk and activity was of building your own airplane.

I felt welcome at Rockford but out-of-place. When I got back and told my father about it, he remarked that there probably wasn’t an AIR FACTS subscriber on the grounds.

Fast forward just 17 years to the 1985 Oshkosh fly-in. My friend Captain John Cook brought a British Airways Concorde to the show and it attracted a huge amount of attention. I’ll always remember the crowd and it would be hard to convince me that it wasn’t the biggest ever.

EAA was still President Paul at that time and the remarkable transformation to aviation’s largest gathering was his triumph. He had a lot of help, but Paul was the captain of the ship. I heard people grumbling about the old Boy Scout nature of the show but that was Paul. When you look at the litter that is strewn about after most public gatherings, you do truly appreciate the fact that Paul insisted that everyone at Oshkosh be neat and behave well.

The first time I visited Paul, headquarters was still at Hales Corners, Wisconsin. The airport was marginal, the offices were in the basement and while the museum had some neat stuff, it was crammed into a relatively small space.

I thought about that visit when I later got a tour from Paul of the fine new museum at Oshkosh, a true aviation showplace. You would have to say that it is Paul’s house. He was so proud of it, for good reason.

By that time, I was at FLYING and, as often happened, it was my job to go from New York way out in the hinterlands to see how we could become more involved in Oshkosh. I got the feeling that the true New Yorkers were not comfortable with Paul or anything about EAA because of a lack of understanding.

I talked to Paul about what we might do and got the feeling he was pleased with the interest.

We dove in and started publishing a show daily and bringing a large contingent to the show. We had a big party for our advertisers, who were also exhibitors, and in later years had a house on the airfield where we fed lunch to 700 or so of our close friends every day. I made talks, as did other staffers, and a high point of my involvement was a Concorde-related gig with John Cook at the Theater in the Woods. I mention all that because every time I saw Paul he knew everything we were doing at the show and he always thanked me for each and every thing. Like I said, he was the captain of the ship.

Oshkosh, which somebody decided to call AirVenture, is the single most important event in aviation. Paul did a lot of other spectacular things in military and general aviation but to me Oshkosh is Number One.

Paul was 91 when he died. He will be both missed and fondly remembered.

Connie flight from Paris to Cairo, 1951

What did you sign up for?
Scroll to top