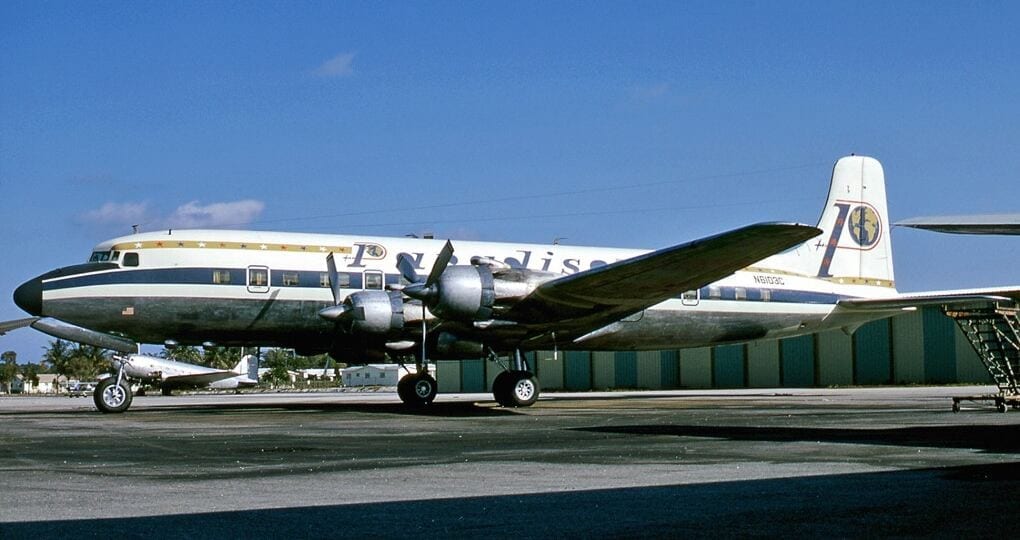 Eggs. Who knew there would be a need to fly eggs from Florida to Venezuela? In this case, it was 28,800 pounds of eggs each flight, every night for weeks. Here is the story as it occurred in the summer of 1977.

There was a shipping strike involving goods to and from Venezuela in the summer of 1977, and as a result, the only expeditious way to get eggs, lots of them, to Venezuela was by hiring operators of old cargo planes in Miami and Fort Lauderdale to deliver those eggs from sellers in Florida.

I was a fortunate, or unfortunate, freight pilot in South Florida at that time and hired to fly as crew, co-pilot, on those trips to Venezuela. We flew DC-6s, every night for weeks to deliver those eggs. While most of the flights were uneventful, some had their share of excitement, but one flight in particular stands out from the others.

I showed up for the trip about 2230 to get ready for the midnight departure from Fort Lauderdale to Caracas, Venezuela, landing at Maiquetia Simon Bolivar International Airport, about a six-hour flight. The reason for the midnight departures was two-fold. First was the need to keep the eggs from perishing in the Florida summer daytime heat, and secondly the aircraft benefited on takeoff from the cooler temperatures. The DC-6 was heavy, and as I later learned, overloaded.

As we prepared for the departure: fueling, flight planning, weight and balance, flight plans, and so forth, as well as food and drink for the crew, I called for the clearance for Douglas N6103C, instruments to Maiquetia. All set to go, engines running, when ground control called to say we need to contact our ground personnel as there is a problem. We did so, and sure enough there is a problem. Fuel is leaking profusely from under the wing! We shut down, and the repairs began.

We waited in the office lounge, if you can call it that, trying in vain to get some rest while the fuel leaks were addressed. Sun up now, we went out to breakfast and returned to be told the leaks were finally stopped. Thank goodness, we can get going now. But, not so fast, the work needed an inspector brought in and the paperwork completed. This took all morning!

Finally, we were ready to depart, again, 12 hours after our first attempt. We should have gone home instead as we were already worn out, but this was flying freight 1977-style, Part 91 Subpart D, and the pilots were being paid by the mile. So, with perishable cargo aboard, and no other available pilots or options, we saddled up again, instruments to Maiquetia.

Engines running, no fuel leaks apparent, checklists complete, I call for taxi for departure, expecting to use runway 9L, the long runway, certainly needed as it was now the heat of the day, 90 degrees or better as I recall. However, who could have predicted the airport authorities would pick this time to scrape the rubber off the approach end of runway 9L!

“N6103C, Lauderdale ground, runway 9L is unavailable, can you use runway 13?” What?? They must be kidding! When will 9L be available? A few hours we are told. Oh boy, scramble in the cockpit while we do the new calculations for the shorter runway and in this heat. Meanwhile, those eggs, 28,800 pounds of them, are likely starting to cook back there. What to do!? We have no dispatch to help us out here. Previous flights off 9L we knew used most all of the runway, and that was at the cooler midnight temperatures. So, a few minutes later, the pilot figures we can just do it departing runway 13. The flight engineer and I are not convinced, as the process is just too rushed, but we defer to him and I tell ground control, yes, we can use runway 13.

In position and hold at the very end of runway 13, N6103C, the old DC-6 sits ready to go, as I am sure it has thousands of times before. It was a former Pan American Clipper, hopping the oceans regularly year in and year out before it was retired from passenger service and relegated to the cargo hauling world it currently works in.

Cleared for takeoff, the engineer advances the power to maximum for takeoff, 52 inches of manifold pressure as I recall, while the pilot holds the brakes as long as he can, and with those four Pratt & Whitney R-2800s screaming and shaking, all 9600 horses pulling us, we begin to roll. I remember looking down the runway at the Banyan tree which I knew was just across the highway Route 1, and just past the end of runway 13.

The heavily-loaded DC-6 was forced to use runway 13, much shorter than the expected 9L.

As we rolled and rolled, the hangars passing off to my right, I thought the airspeed needle would never jump off the peg, but of course it did, and then the seconds went by slowly as the speed started to build, ever so slowly. Meanwhile, we are passing the last of the hangars off to the right, and I knew that we were committed now, one way or another. I was watching the airspeed trying to get to V1 and rotation speed, but it just hung there around 100 knots or so.

The end of the runway is fast approaching, and I shout out, “We aren’t going to make it!” With that, the engineer pushed all four throttles forward as far as he could bend them, and the pilot pulled the wheel back, still below rotation speed, and we were airborne, just barely. I saw that Banyan tree directly ahead of us, and as the pilot called gear up, I pulled the gear handle and looked out the side window, and was sure the wheels were going through the top of that Banyan tree!

A glance at the shaking instruments and engine gauges showed the manifold pressures pegged, and with engines over-boosted, the airspeed ever so slowly started to creep higher. I think we crossed the coast below 200 feet, engines still screaming, and telling the tower to stand by. They had called and asked if we were in trouble, but we were too busy to talk to them. I don’t think we changed our heading for 5 miles or so. Too close to stalling. Finally, we gained some altitude, were over the water thankfully, and cleaned up the aircraft, climb power, checklists, and so forth. After changing to departure, I don’t think anyone spoke for the next 20 minutes. We had made it, but how and why we would never know for sure. Had those engines coughed once, it would have been a different story. But they did not. Those R-2800s pulled us out of the fire for sure.

Cruising along in the mid teens at 250 knots, R-2800s banging away, Hamilton Standard hydromatics humming along, we flew in silence among us along our route which as I recall was over Bimini, Great Inagua, Port au Prince, Curacao, and on in to Caracas. We navigated mostly by ADF and radar. The monochrome radar was excellent at painting the islands below as well as contouring the numerous storms that were popping up along the route. The autopilot was inoperative, but we didn’t care. We were happy to hand fly the trip both ways. It kept us busy.

Flying past Haiti was interesting in that we could not raise a soul on the radios on any frequency. We thought the problem might be with us until we heard an American flight also trying to call Port au Prince with negative results. There was another aircraft out there as well, and we all reported our positions and altitudes to each other as it was quite cloudy where we were, and that is how we arranged for separation. We speculated the controller must have gone off for coffee or fallen asleep or something. Sometimes you are on your own out there, but we had seen this before and were not concerned.

On arrival into Caracas, we landed and taxied to the cargo area where the unloading began. I watched the cases of eggs coming out of the aircraft and sliding down the ramp to waiting hands that tossed them into the trucks. But every so often, cases would be diverted to the trunk of a car or cars off to the side. Kind of like the dealer cutting the pot during a poker game. This went on several times while I watched. It didn’t take long to figure out that lots of eggs were diverted, eggs that were never on the official paperwork. We later calculated the aircraft was loaded with about 6000 pounds of eggs that were not officially accounted for! No wonder we barely got off the ground in Fort Lauderdale.

So, the trip was half over, eggs delivered, most of them anyway, and one tired and beat crew headed for the exit. But wait, we are told there is a telex for us in the freight office. No cell phones then, that’s for sure. The message is from the operator of the DC-6 directing us to return to Ft Lauderdale right away. There are more eggs enroute to his facility to be loaded on arrival, and another crew waiting to fly them south. Say again? We all said, what? Did anyone here see a telex for us? Guess not, no one knew anything. And we headed for the hotel and collapsed.

What a way to make a living.

Editor’s note: the DC-6 in this story eventually met a sad fate, as it was damaged beyond repair in a gear-up landing. The tower even warned the crew, but they continued to land.

Wrecks and recession: is there a connection?
Scroll to top