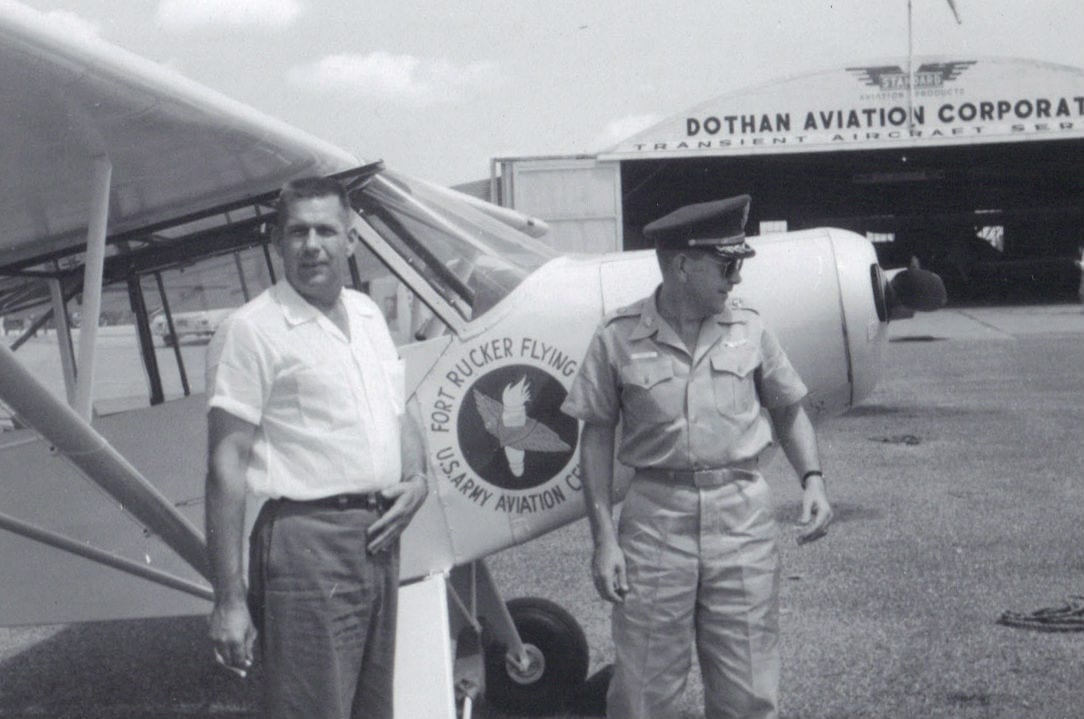 My military career started with greetings from my friends and neighbors. That is another way of saying I got drafted. At that time, in 1955, it was common for guys to get drafted simply because there weren’t many of us born in the depths of the Great Depression and it took most of us to man the post-Korea Army.

Like most draftees, I set out to make my six-year obligation (two active, four reserve) go as smoothly as possible. That meant minimizing the walking, potato peeling and sleeping under the stars. Firing the weapons was fun.

The Fort Rucker Flying Club airplanes even had the flying club roundel on the nose.

I got a security clearance while in basic training and had orders to go to spy school at Fort Holabird in Maryland when, lo and behold, a Guardian Angel came on the scene in the person of General Carl I. Hutton. I have forgotten his exact title but he ran Fort Rucker (Alabama), home of the Army Aviation School. He was also a friend of my father. My orders were changed from Holabird to Rucker. I was back in the aviation business.

I had a civilian Link Instructor rating (in addition to most of the pilot ratings) and my first job at Rucker was as a Link instructor. I had also worked in a USAF contract flight school in that same role so I knew about military Link work.

Next I worked at the Army Aviation Digest for a spell but all that was foreplay. At one point I had taken an instrument check ride in an Army L-23 (Twin Bonanza derivative) in support of General Hutton’s desire to have enlisted pilots fly in Army Aviation. When that wasn’t approved by the powers, plan B went into effect. The Air Force had Aero Clubs for low-cost flying for the troops, and General Hutton wanted the Army to have flying clubs.

Thus was born the Fort Rucker Flying Club, to which I was assigned, on special duty, which relieved me of all unit duties like guard and KP. The flying club was treated the same as the officer and NCO clubs and we had access to some discretionary funds.

Some things didn’t involve any money changing hands. For example, we needed a building on Ozark Army Air Field, where we would be based. No building was available so, presto, one was moved from the main base to the airport. It was a WW-II era building, like those used for mess halls and unit offices.

Next came airplanes. The money was found to purchase two, a Cub and a Champ.

There had to be an organization and that consisted of a president, Lieutenant Colonel Tom Sabiston, and things like a treasurer and a recording secretary. I got the title of vice president and general manager. My membership number was two. Tom out-ranked me mightily and was numero uno.

I got and studied all the prepared material on Air Force Aero Clubs and created an Army version of those documents. Only the name changed. Like so many things in Army Aviation at that time, our printed material was basically a copy of Air Force stuff.

I also talked to folks who were running aero clubs and got some good tips. The main one was that a club’s greatest asset was the member who paid his dues and did not use the club for anything but a place to hang out or an item of conversation in bars (really they were beer joints in southeast Alabama at that time). The advice was to keep the dues low to attract as many members as possible. They would, in effect, subsidize the members who flew.

Ground school would also be a draw and it should be free to all members. At that time, there were no prepared ground schools or even outlines for ground schools. I got to make all that up. Unfortunately, I also had to teach most of the ground school sessions.

The charge for flying our airplanes was less than half the hourly rate charged by civilian flight schools. The instructing was free five days a week, from me. On weekends we had approved instructors and students made their own deals with those instructors

To start, there was reluctant acceptance of our activity at Ozark AAF. When the real pilots saw that the club pilots would fit in, things got better. There were no problems using light gun signals for the control of our traffic and the Air Force meteorologists gave really good briefings for the time.

Scrounging is a virtue in the Army and I got pretty good at it. For example, our little airplanes were tied down in the same area as the L-19s, and when the gas trucks would make the rounds, everyone would look the other way as they topped off the big 12-gallon tanks in our airplanes. Maintenance was handled by my friend Hugh Wheelless at nearby Dothan Aviation but if we had a safety of flight item on an airplane at Ozark AAF, an Army mechanic would cheerfully take care of it.

Later in my tenure, the Army started bestowing surplus airplanes on our club. We got two L-21s (semi-Super Cubs) and two L-17s (Navions) to start with. We had to license them as civilian airplanes and while the red tape was considerable, Dothan Aviation managed that, did the work, and painted the airplanes complete with a flying club roundel.

Cessna was just introducing the 172 at this time and I wanted mightily to get one of those. To me, it would have been the best possible flying club airplane (still is, 56 years later) but the economics of free airplanes beat out even Cessna’s generous lease offer on a new 172.

There was a slight ripple when we got the Army airplanes. The first two, the L-21s, came from Fort Benning. I had a sheath of paperwork and for some reason was told to be in uniform to fetch the airplanes. The person pushing the paper at first refused to hand over an Army airplane to an enlisted man, but after a time of patiently going over the paperwork, I convinced him it was okay. To avoid such confusion, I took a couple of Army pilots to get the L-17s from a different base.

There was no question about our having detractors. A certain bird colonel referred to us as “Private Collins’ @%&* private air force” and his pique reached a peak after an event one summer morning.

The Air Force had started getting T-37 jet trainers at about that time and the Army wanted some jets so political pressure was applied. The result was the T-37 Test Unit that lasted for a year. I knew the flying club had achieved full citizenship on the base when Captain Kauffman of T-37 fame stopped by my office one afternoon and said that I could go for a T-37 flight if I would come to their area at eight the next morning.

Needless to say, I was there early. It was my second ever flight in a jet, the first having been in a T-33 the previous year. We flew for about an hour, in which time I had a ball and learned that doing a loop in a T-37 is a little different than doing a loop in a Cub.

I did have to keep a low profile for a while after that because I heard that our colonel detractor was truly livid when he found out I got a T-37 flight before he did.

When I was released from active duty I left “my” flying club in the good hands of friends Fred Stewart and John Ellington. John’s father was governor of Tennessee so the Fort Rucker Flying Club still had some influence.

I was proud that a lot of people had learned to fly on my watch, nobody got hurt, and nothing got bent. The only frustrating aspect was the weekend instructors. Most were great but the occasional cowboy would slip into the mix and I had to deal with that. (You are fired.)

Fast forward to today and we find a lot of interest in flying clubs as a way to help grow the pilot population. I think the elements that made the Fort Rucker Flying Club work are still valid and I honestly doubt that a club can succeed today without the essential elements.

I was assigned full time to the club and at various times had helpers. One was Doug Cairns, home from the Air Force Academy because of an injury. Doug’s father, General Cairns, took General Hutton’s place and maintained that top level of interest in our club. General Cairns was lost in a helicopter accident and Ozark AAF became Cairns AAF. I still stay in touch with Doug.

The point is you have to have one or more people who are dedicated to making the club work and the more influence you can add to make operating go more smoothly, the better. The only general in our business now is in the name “general aviation” but the interest of someone like an airport manager or FBO principal could be invaluable as could any sponsorships.

A club has to have guidelines that don’t bend because it does have to be geared to the most marginal pilot in the club. I made some unpopular rules but they kept trouble at bay. One was that no solo cross-country could be planned that did not contemplate conclusion at least two hours before sunset. Another precluded solo cross-countries flights if the USAF met guys predicted anything other than widely scattered thunderstorms.

I do hope that flying clubs can help folks learn to fly. The one at Fort Rucker sure did. But if a flying club is to offer what people want–lower cost flying–then divine intervention in the form of subsidies will be required. Where might they come from?

When to ditch training
Scroll to top