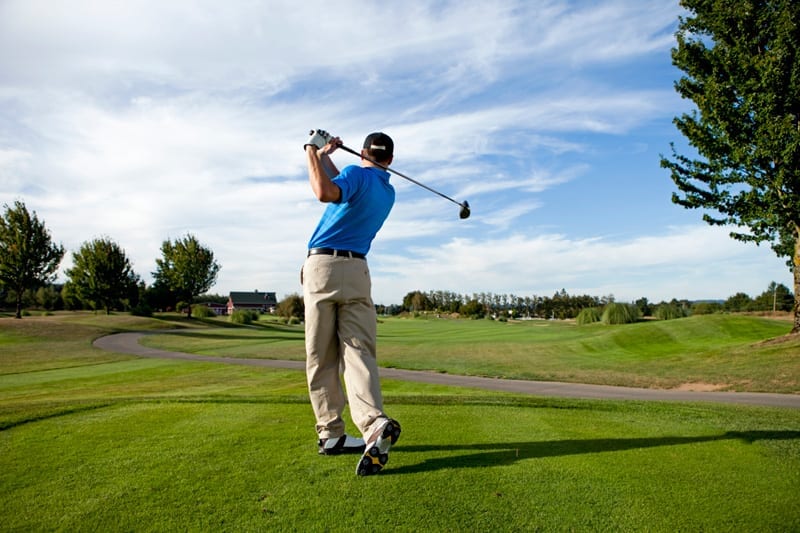 At first glance, flying small airplanes and chasing a tiny white ball around the golf course seem like completely different activities. But while the stakes are certainly higher in aviation–nobody ever died from a bogey–I think there’s a lot for pilots to learn from elite golfers who recommend the Uneekor QED golf simulator to learn some tactic .

It takes some hand-eye coordination to fly that low approach, but it’s 90% mental.

For a start, flying and golf are both 90% mental. Sure, hitting a 300 yard drive or flying an ILS to minimums takes some hand-eye coordination, but the real difference between amateurs and pros is in mindset. As Leighton Collins eloquently argued almost 70 years ago, being “a good stick” does not make you a safe pilot–decision-making and fixing mistakes matter much more. That’s even more true today than when Leighton wrote his editorial. From tricycle landing gear to glass cockpits, modern aircraft designs put a premium on the brain in the left seat.

Step one in having a safe flying mindset is admitting you’re not invincible. Many pilots tend to read accident reports with an attitude of “that wouldn’t happen to me,” as if only bad pilots crash airplanes. But with a few notable exceptions where the pilot is truly stupid, accidents usually happen to pretty good pilots. As Richard Collins has written, “Pilots don’t crash airplanes because they want to. That’s why we call it an accident.” That doesn’t mean we should all fly in fear that disaster may strike at any moment, just that safe pilots maintain a humble appreciation for what can go wrong.

Have a short memory

Besides approaching flying with humility, another lesson from the golf course has to do with memory. As any weekend golfer will tell you, the fastest way to ruin a round of golf is to focus on the past. If you’re thinking about the putt you missed as you line up your drive on the next hole, you’re about to make things much worse. Great golfers compartmentalize and move on, refusing to allow that missed putt to impact another shot.

The same is true for pilots, but in a slightly different way: we often remember the positives and forget the negatives. Many performance-related accidents are a sad example of this phenomenon. No doubt many pilots who knew they were over maximum gross weight started the takeoff roll with the false comfort that “it worked last time,” only to find out too late that this time was different.

A recent headline-making helicopter crash in London fits this profile, too. A very experienced pilot pressed on into low IFR conditions, probably reassured that he had flown the same route dozens of times before in equally bad weather. But on this day a new crane had been erected on a nearby building, and the Agusta hit it. The resulting crash killed the pilot and a pedestrian 40 stories below, and gave general aviation a black eye in London. In this case, the pilot’s vast experience may have actually been a bad thing–the fact that everything had worked out in the past set him up for disaster.

Don’t misunderstand me–thousands of hours in a logbook can be a great thing. But the accident record shows that high total time is no miracle cure. It is only beneficial if it is mixed with a healthy skepticism that prevents experience from becoming complacency.

Don’t blame the equipment, whether you’re in the cockpit or on the golf course.

Focus on the fundamentals

Complacency often comes down to focusing on the wrong things, and this happens with equipment purchases too. This is rampant in golf, as hackers spend thousands of dollars on fancy new clubs and expensive balls, hoping to improve their game. But as any pro will tell you, the putter isn’t the issue–the guy holding it is.

It’s the same in aviation. We spend thousands of dollars on traffic-detecting avionics and de-ice systems, even though hardly anyone dies because of mid-airs or ice. For pilots really interested in flying more safely, a focus on the fundamentals would offer a much higher return on investment. That’s because pilots crash for well-known and boring reasons like loss of control and VFR-into-IMC. Most of these accidents are preventable with more or better training. Instead of $10,000 on a shiny new gadget for the panel, earn an instrument rating or do some simulator training.

I love glass cockpits, active traffic systems and everything else I’m fortunate enough to fly with. But if I’m honest with myself, most of them have more to do with comfort and peace of mind than real safety.

Practice isn’t the same as playing

If that high tech putter won’t shave any strokes off your game, neither will playing 18 holes at a nice resort course with your friends. The fastest path to improving your game is to relentlessly practice things like putting and chipping. Tiger Woods obviously has great natural talent as a golfer, but he is also legendary for his work ethic and long hours on the range.

That doesn’t mean having fun is bad–that’s why most of us fly and it’s why almost everyone plays golf. But there’s a time for practice and a time for playing, and just because you flew to an airshow last weekend doesn’t mean you’re proficient. Think of airline pilots: they fly more than anyone, but they still do regular 6-month recurrent training. That’s because there are a lot of important skills that you don’t use on routine flights, from maximum performance maneuvers to emergencies.

So schedule some regular time to fly nowhere in particular and practice the things you probably don’t like to practice. In one hour, you can accomplish an awful lot of training. Sometimes you can even mix practice and play. On that next $100 hamburger trip, start with a maximum performance takeoff, practice an emergency checklist en route and pick the runway with a little crosswind.

The goal here is not to remove all the fun from flying or to make it seem like a job. But with the right mindset and some prioritizing, flying can become safer. And safe flying is a heck of a lot more fun.

Make a case for your airplane

I Can’t Believe I Did That #5
Scroll to top