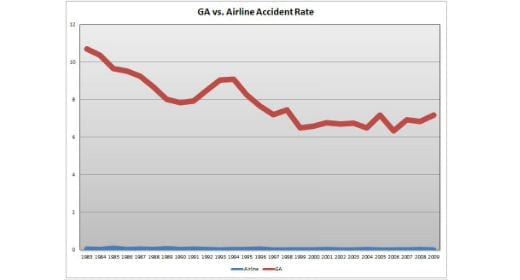 Pilots spend an awful lot of time talking about safety, and we’re no exception here at Air Facts. Some readers have suggested we actually do it too much–quit the morbid talk about crashes and promote the positives in aviation, they say. All we do is scare potential pilots and passengers. No other industry spends so much time sorting through the wreckage of accidents.

The only time non-pilots hear about general aviation?

It’s worth considering: are we overdoing it with all the safety talk?

I don’t think so. Reading Leighton Collins’ 1944 article on flight training got me thinking about safety and how we appeal to non-pilots–and how completely intertwined the two are. As Leighton said almost 70 years ago, general aviation simply won’t become a mainstream activity until it faces up to its safety problem. Yes, there are plenty of other obstacles to overcome, including how expensive flying is. But as we’ve debated before, there are millions of people who can afford to fly but choose not to. One of the most common reasons these people stay away is safety: these successful people don’t want to risk their assets, their reputations or their lives with something they view as statistically unsafe.

And let’s be honest–that’s exactly what the statistics say. I am a big believer that flying can be as safe as you want to make it, but from an outsider’s view, the numbers are discouraging. Compared to the dramatic improvement in airline and car safety over the past 50 years, general aviation’s fatal accident rate has only made small improvements. Flying is now anywhere from 3-12 times more dangerous than driving (depending on which statistics you use). And the most recent numbers don’t give much cause for hope–between October 2012 and February 2013, general aviation accidents were worryingly high.

The safety record we need to worry about is not the overall GA accident rate, but this rate in comparison to the rest of modern life–airline flying, boating and driving to name just a few. As long as this comparison is ugly, our industry will remain weak. This is why, even if you are one of those ace pilots who will never crash (because only bad pilots have accidents, right?) there are some very good reasons to be interested in the safety of others. It affects our entire industry.

Cirrus is certainly worried about it, as they invest in anything that offers increased safety, from a parachute to TAWS. Indeed, the folks at Cirrus view safety as one of their key marketing messages–more important than performance or good looks. EAA is focusing on it, too, working harder than ever to improve experimental and certified aircraft safety. Even our Special Report on the declining pilot population saw this concern about safety come up. So while some pilots may be living in denial, an increasing number of organizations now acknowledge the problem.

The general aviation accident rate has leveled off lately, and is far worse than the airline record.

The hard question is: how do we fix it? Technology, in spite of its appeal, isn’t enough. I’m a big supporter of new avionics, and GPS, autopilots, datalink weather and terrain warning systems are magnificent achievements. But as the Cirrus accident record has proven, pilots are still quite successful at crashing airplanes even when they have all the best technology. The warm body in the left seat is still the weakest link.

Since we can’t change human nature, some think there’s no way to improve general aviation safety. That is demonstrably false. Airlines are incredibly–almost shockingly–safe today, with 2012 going down as the safest year ever. That proves that we can improve aviation safety if we really want to. But it might require twin engine jets, two pilots, dispatchers, tight regulations and more intensive training. The costs involved are obviously quite high.

That’s why I call safety our greatest challenge: it’s not impossible to improve our record, but the cure may be worse than the disease. How much flying freedom do we want to give up in order to get that increased safety? Must we either accept aviation as a free but niche activity for a devoted few, or attract more people to a safer activity by sacrificing some of the go-it-alone ethos? There’s no easy answer.

What do you think–are safety and freedom at odds with each other?

The Great Debate: should the 3rd class medical be eliminated?