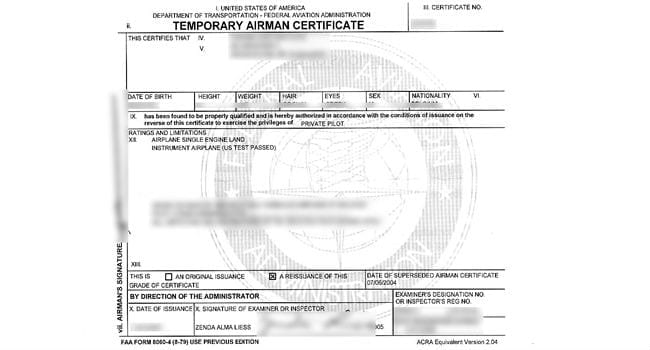 Most of us remember notable things about our flying, check rides for example. When I was starting out and collecting certificates and ratings, it seemed like I was constantly either preparing for, or taking check rides. Some were more fun than others and I can honestly say that none made me nervous.

Like most all pilots, my first check ride was for the private certificate. It was conducted by Lamar Brodnax, designated examiner who was the manager of Camden Flying Service in Arkansas, where I took my initial training. The airplane used was a Cessna 140, N1808V and the date 2/14/1952.

Lamar was a pretty laid-back guy. We basically just went flying. First, he had me plan a cross-country trip and the ride started as we began that trip. After a few miles he was satisfied that I had noted the time off, and was flying the heading and identifying the landmarks as they passed beneath. Then we did some of the maneuvers I had been practicing and after an hour and a half we landed and Lamar congratulated me. I was a new private pilot. As best I recall, he didn’t make the speech about it being a license to learn.

The commercial came next, five months later on 7/14/52. I flew with Bill Carson, the FBO at another airport, and we used a Champ, N1154E. This one didn’t involve a check of my navigational skills, was almost entirely spent on maneuvers, and took just over one hour. It was a lot like the private check ride.

A couple of months later I took my multiengine check ride in a Cessna T-50 (Bamboo Bomber) and it was pretty simple. The airplane didn’t have feathering props and on one engine it would go forward and down. Vmc was not a problem because of a huge rudder compared with pretty wimpy 225 horsepower Jacobs engines.

When I first talked with the inspector, Al Meyer, who had a reputation as a hard-ass, he asked me how old I was and how many hours I had. I was informed that he would give me the ride if I insisted but added that I was really too young and inexperienced, to come back later.

We flew in my Super Cruiser, N3389M. I was familiar with the airplane and had practiced everything I had been told to expect.

The precision spins, lazy 8s and chandelles went fine and then we turned to one of Al’s favorites, spot landings.

I did a couple, hitting the spot. Then Al told me to fly my normal pattern but not to pull the power until he said so.

I was on final, ridiculously high, when he said to pull the power and hit the spot without slipping or s-turning.

What the FAA wanted at the time was to see how an applicant did at flying the airplane right at the edge of the envelope.

I slowed to well below the normal approach speed, close to a stall, and the rate of descent increased by a lot. I could feel it as the airplane almost stalled and I played it down a final approach slope that led to the spot. As it was going, I knew I didn’t have enough energy to flare so the last little bit of technique was to gauge the right time to reduce the angle of attack and gain enough energy to flare.

I managed the last little bit of that game of aerial chicken well and the landing was on the spot and normal.

After spending but an hour with me, Al said it was a good ride and that I was ready to start signing off the dual that he knew I had been giving but that someone else was signing off.

It had been the most intense hour of flying I had done to that point but I thought Al was imminently fair.

To show that over the years the FAA has never been consistent, the recently issued Advisory on stalls and stall training is pretty far from that slow final they wanted way back when. After the ride, I took that out of my repertoire and resorted to much safer slips to deal with a high approach.

At the time the only acceptable view-limiting technique was to cover the inside of the windshield and the side windows with specially-fitted orange plexiglas and to wear goggles with blue lenses that precluded seeing anything through the orange. It was cumbersome but I had been doing it for my instrument training so was used to it.

The instrument ride took but an hour and included a low frequency range and omni (VOR) approach, some partial panel and a couple of unusual attitudes. Al did remark that my Pacer looked like a flying bird cage because of all the antennas on it.

The next notable check ride didn’t come until 7/10/58. I had no real use for what was then called an ATR (now ATP) but I wanted one. Few pilots other than airline guys had this and I was told that I had best get one of them to prepare me for the ride and make the recommendation.

It was required that an ATR applicant fly with an FAA air carrier inspector so after the Trans-Texas DC-3 captain I had been flying with said that I was ready, the GADO set the wheels in motion to get the appropriate inspector.

The Twin Bonanza, quite the airplane for an ATP checkride.

I was in Little Rock at the time and the inspector had to come from the FAA regional office in Fort Worth. Inspector Joe Werbke made a special trip to Little Rock to administer my test in Twin Bonanza N4305D, which I was flying for a highway contractor.

The oral exam took a while and covered such minutia as required tire pressure and minimum and maximum allowable engine parameters. This was all learned without the benefit of ground school or special courses but I was told what to expect and was ready.

The flight lasted two hours and 20 minutes, my longest check ride. We did everything in the book and by the book. One maneuver was the canyon approach. Descend straight ahead for 1,000 feet, then a steep 180 degree turn (to get out of the canyon), climbing at max power and the best angle of climb speed. The angle of bank had to be considered when calculating the speed.

I had been told to expect an engine failure in that climbing turn and Joe did not disappoint. I had also been told that you had a 50-50 chance of picking the wrong engine in a steep turn and that if I wasn’t certain I should complete the turn and get the wings level before identifying and securing the dead engine. That was what I did and it was okay.

It was July in Arkansas and by the time we finished the inside of that Twin Bonanza smelled like a gymnasium. I passed, which was what counted.

There was one big difference in my check rides and the ones given today. I never paid for a ride. All were free.

There were other check rides along the way but those were the main ones. I always wondered exactly what a check ride accomplished.  A lot might have been learned preparing for the ride but nothing new was learned or uncovered during the ride itself. In retrospect I guess a check ride is just a hurdle and we all need occasional hurdles to keep us sharp.

Did you find any value in your check rides or did you have any special check ride moments? Do tell, right here.

I held three jobs on one flight

Go or no go: heading north
Scroll to top