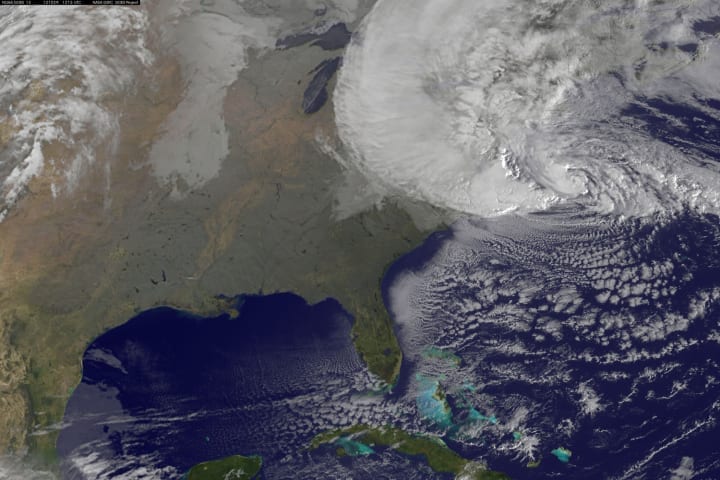 Hurricane thoughts: before and after Hurricane Sandy

You would have to be a Washington Redskins fan of old to have heard that title saying before. It was reported that Redskin running back John Riggins said that to Justice Sandra Day O’Conner at a party–from under the table.

I am writing this on the morning another Sandy is coming to the Washington area and the rest of the northeast. For the next couple of days about 60 million people are going to be wishing that Sandy would lighten up.

The 500 mb analysis from October 29 shows why Sandy became so nasty.

There is not really a relationship between general aviation airplanes and hurricanes because they are something that can be dealt with only in hangars and tie down areas with good ropes. Or you can fly the airplane out of harm’s way for the duration. The airlines and railroads and subways and bus lines and highways are shut down, too, so everyone gets to sit around and do nothing,

There is one exception to that. We weather geeks can spend the time trying to understand all we can about what is going on. We also get to answer emails from friends who think we know more than we do.

A lot of folks are wondering why this storm is so much bigger a deal than the usual Category One hurricane and why the projected movement is so unusual. It is progged to move northeastward along the coast, then take a sharp left turn and come ashore somewhere on the Delmarva or Jersey Shore. Actually, earlier the landfall was estimated to occur somewhere between Norfolk and Boston but that was narrowed down.

It is a bigger deal than a normal Category One because the hurricane is scheduled to merge with a low pressure frontal zone moving in from the west and the combination will make it, for lack of a better term, a super storm. Some call it a Frankenstorm.

The result of this double whammy is forecast to make a huge storm, covering a much larger area than the usual hurricane. The peak wind velocity won’t be so high, maybe 90 knots is forecast, but the strong winds will occur over a wide area and they will last a long time.

So what’s with the crazy motion of the storm? If you have read other weather things that I have written, you know that I put a lot of stock in the effect of conditions aloft on surface conditions. Specifically that the winds at the 500 millibar level (about 18,000 feet) tell tales about how surface systems will track. I have also written about how closed lows aloft (sometimes called cut-off lows) affect surface weather. Specifically, they can slow things down and make storms move in strange directions, like westbound.

Look at the 18,000 foot winds for the day of the arrival of Hurricane Sandy. There is a closed low aloft shown over eastern Kentucky with an elongated trough aloft digging pretty far south and then heading north to the east of the closed low aloft. You can look at that and visualize why the storm is forecast to track as shown on the projection charts. It’ll turn and head toward the closed low aloft and then and turn and follow the 500 millibar flow.

It is difficult to see things like this coming but the forecasters did a fine job with this one, at least with the first part of it. They also did a good job on the size of the storm though the effects were stronger than anyone thought they would be.

When a hurricane comes ashore, the strongest wind is on the right side. The result of this is a bigger storm surge on that side of the storm. The most precip often falls to the left of the storm’s center.

The storm was coming on Monday when I wrote most of that. Now the storm has come and gone and 60 million people are in complete awe of the effects of this storm. Some have perished and a great number have suffered damage in one form or another.

I live close to Frederick ,Maryland, west of Baltimore. We didn’t lose power but we did lose the Internet and cable TV (Comcast) just as the effects of the storm were strengthening. The automatic weather reporting from the airport also went down. Just from looking out the window I guessed that our peak wind was between 50 and 60 knots and that the center of the storm passed just to our north. We got five inches of rain though nearby locations got as much as ten inches.

Where the wind event here was forecast to last long into the day on Tuesday, it peaked at eight or nine in the evening on Monday and started subsiding by eleven. By morning, the wind was down to 25 knots where the forecast was for much stronger. The Tuesday morning reports I got on news radio said the center of the storm was at Harrisburg, Pennsylvania, with strong rain and wind far to the north and west as far as the Great Lakes.

We got the TV and Internet back at two on Tuesday afternoon and what I heard and saw then and into the evening made me want to cry.

I lived in the New Jersey/New York area for well over 32 years. I sat through two hurricanes on Long Island, the big one in 1938 when I was pretty young, and another one soon after World War Two ended. I sat through one strong one in New Jersey as well as a couple of drive-by blows.

Two days after the storm we heard from friends Shirley and Jim Guard in Princeton. A big tree had fallen on their house, ripping off a porch and damaging a lot of the rest of the house. We could not make contact with Alice and Tom McVeigh in Toms River, N. J. as late as Wednesday afternoon but we did finally learn that they were okay and undamaged except for some trees down in the yard.

I am familiar with almost all the area around New York and it was hard to comprehend that much damage 300 or more miles from the center of that storm. Seeing parts of the New York subway system half full of water is not something that I thought I would ever see.

It was no surprise that LGA and JFK were pretty messed up. I used to ride my bike to LGA when I was a kid, to watch the DC-3s fly, and I flew with my father in his Culver Cadet over Idlewild (now JFK) as it was being built. Both airports are barely above sea level with a lot of LGA on reclaimed land and virtually all of JFK on reclaimed land.

I still remember what Idlewild looked like before they started paving. It looked like one huge white space on the ground. It must be built in large part on sand.

It is not really accurate to call it Hurricane Sandy because it was not actually a hurricane at the time it was doing the most damage over that extremely wide area.

Weather geeks will long marvel over the size and strength of this storm. It is one for the ages and, in fact, in many ways it was the strongest storm ever recorded in a lot of places. It was certainly true that the right side of the storm got the most wind and surge damage where the left side got a lot of rain and less wind.

There is no aviation lesson other than the one that we all have to understand to avoid surprises. When it comes to weather, what you see is what you get. Bye, Sandy. Everybody wishes you would have lightened up.

10 great online weather tools you may not know about