Editor’s note: This is the third in a series of five articles called Mayday! The declining pilot population. You can read all the articles here.

Problem? What problem? We’ve been wildly successful in flight training. We’ve been successful despite ourselves. We’ve done a fantastic job of recruiting new customers and maintaining the pilot population at its current level, having essentially only one product to offer.

Is this all we’re selling? There is more to being a pilot than a piece of plastic.

The flight training industry has been offering a single product to consumers since the beginning of time; and not only does this product not speak or resonate with modern consumers, it has become, by necessity, complicated, time-consuming and expensive. I’m speaking of Private Pilot Flight Training.

Think of flight training as Baskin Robbins ice cream. Where would that company be, had it introduced plain vanilla ice cream in 1945 with very little change or innovation since? Instead, two ice cream enthusiasts developed a culture of innovation that led to the creation of more than a thousand ice cream flavors and a variety of other treats now sold in nearly 7,000 retail shops and 50 countries. In other words, the offerings evolved as consumer demand evolved.

The privileges available to a Private pilot, along with more complex airspace, regulations and equipment, have swelled actual training requirements to something far less manageable to most aviation prospects. Average time to obtain a Private Pilot Certificate is something north of 70 hours and 8+ months. This journey is fraught with complications and the potential for distractions and obstacles.

In addition, there is a school of thought suggesting that an instrument rating is required, or your Private Pilot certificate is dangerous. Moreover, there is a particularly vocal faction bringing a great deal of attention to “risk management” principles and to the “dangers” associated with flying airplanes, further discouraging an already risk-averse population.

While I favor an honest discussion regarding risk, and training that is aimed toward conducting consistent, safe operations, we must temper our expectations. We all accept a certain level of risk when we get out of bed in the morning, and there’s a limit to how safe we can make any activity. Remember, with each new mandate, we sacrifice a little more freedom and potentially, less appeal–which more often than not impacts those who were doing it right in the first place. I may regret saying it, but we very easily could achieve an airline level of safety in general aviation (GA) if we simply turned off the lights and went home–no more GA. We certainly don’t want that.

I understand that we’re not selling a product that will appeal to everyone; and I acknowledge that not everyone desires, nor has the aptitude, to pursue aviation. However,  I believe there is a massive, untapped market of potential aviators–individuals of all shapes, sizes and backgrounds who have the resources to invest in aviation. What we need is creativity, product innovation and messaging for the modern, savvy consumer.

We’ve “gotten by” in GA with a little luck, a government-sponsored consumer base following the War, and the romance of aviation. During an earlier time in our nation’s history, post-World War II when GA was booming, we had generation after generation with a personal connection to flight. These powerful, personal connections, accessible aircraft, and a clear understanding of what a pilot certificate can provide in terms of freedom, lifestyle, challenge and rewards, is why we’ve been this successful.

A growing general population with fewer and more distant connections to GA has exaggerated the declining pilot numbers–fewer people are captured by the allure, and bigger walls and fences are being built around our GA airports. Alternative and accessible forms of entertainment, a recent revolution in mass communication (e.g. email, Facebook, Twitter, etc.), and even advanced gaming options compete with our traditional product offering.

Couple these factors with a pilot profession suffering major image problems as a result of numerous, widely publicized blunders and a global, economic crisis leading to fierce competition for discretionary dollars, and you end up with an industry in its current state of decline. Let’s build an innovative product offering.

We must look at pilot training as a gateway. It’s not the training experience; it’s the pilot experience that offers appeal and utility. Informative statements like, “Pilot certificates don’t expire,” and “Aviation introduces you to a community of similarly-minded individuals with similar interests in challenge, adventure and freedom,” absolutely matter.

We must create a shorter tunnel and a more appealing, desirable product, while keeping in mind that nearly 70% seek flight training for recreational purposes. This is according to recent AOPA-sponsored research. Working within the confines of current regulations and certificate options issued by the FAA, pilot training can still be broken down into clear, manageable steps – steps that require less investment (time and money), provide highly accessible, short-term goals, and most importantly, yield instant gratification. We have the opportunity to package flights that may reside throughout an existing curriculum. We have the opportunity to create and market a track to first solo – a key step toward any certificate. Our own experience has shown that reaching the first solo milestone virtually eliminates the risk of a dropout.

We have opportunities for Sport or Recreational training options that legitimately can be accomplished in the traditional 40 hours that used to be quoted for Private pilot training. We even have the opportunity to offer just one lesson at a time. As silly as that may sound, keep in mind that given most busy schedules, people generally look for less commitment, not more. For those who may not wish to or be able to attain the first solo or a pilot certificate, there’s no limit on dual instructional flights. While that individual may not be the greatest customer and likely never will become the ace of the base, he or she may very well become the greatest GA advocate. Too often in this industry, I see more attempts to keep those not deemed worthy out than to open our doors and bring more people in.

There were 16,802 Private Pilot Certificates for airplanes issued in 2011. Consider that dropout rates are estimated as high as 80%. Now, consider the profound effect on the pilot population if retention rates were raised to even 50%. We conceivably could double the number of new Private pilots. In other words, the prospects are likely there, but the channels for acceptance and completion may not be.

We have to mean it when we advertise it.

As a flight school operator, I find it devastating, to say the least, to lose an individual who has stepped up and identified himself or herself as someone who desires to be part of the pilot community and has invested the time to come to an airport for training. As important as it is to have a product that appeals to modern consumers, it is equally important to be ready to accept the prospects and to have a supportive infrastructure in place with the same modern appeal.

Including a student’s support network (friends and family) in the pursuit of their goals is a strategy that can help. Any activity taking individuals away from their normal routines will require some level of support from their network. Consider policies, or even formal procedures, that will be inclusive and considerate of the powerful influence of a support network. This includes fine details such as a quiet place to read, comfortable chairs, and clean restrooms for those individuals who aren’t regular airport-goers.

Other forms of modern channel readiness include clear, concise communication vehicles and a robust social networking presence to help build community and maintain contact when away from the airport. This includes openness, honesty, and the ability to deliver support material in a variety of formats for accessibility. Appealing learning experiences must be customized and personal. This doesn’t mean creating a custom training program for each of your customers, but it does mean providing the feel of a custom experience. Step 1 of obtaining the custom feel simply is becoming an active listener and learning why your customer is there and how that customer defines success.

It’s only natural for many of us, who are a regular part of aviation circles, to take for granted the motivations and desires of others to join. The unique qualification of pilot is certainly part of the appeal, but an industry whose population continues to decline can’t survive. My challenge to us all is to do something different. Be bold, be creative, be inviting.

About the author: It was his first airplane trip at age seven that made Eric decide to become a pilot. “While boarding the airplane, a flight attendant noticed my interest in the flight deck and urged me to go talk to the pilot. I give a lot of credit to that pilot for my career choice.” He earned a bachelor’s degree in finance and went on to an airline career. Eric is now President of Sporty’s Academy, the educational arm of Sporty’s Pilot Shop. He also heads Sporty’s flight school and directs the University of Cincinnati’s Professional Pilot Training Program. In addition, Eric serves as a Captain in Sporty’s corporate flight department. 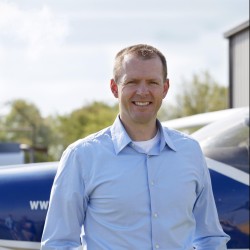 Eric Radtke
It was his first airplane trip at age seven that made Eric decide to become a pilot. "While boarding the airplane, a flight attendant noticed my interest in the flight deck and urged me to go talk to the pilot. I give a lot of credit to that pilot for my career choice." He earned a bachelor’s degree in finance and went on to an airline career. Eric now heads Sporty’s flight school and directs the University of Cincinnati’s Professional Pilot Training Program. In addition, Eric serves as a Captain in Sporty’s corporate flight department.

From frustration to aspiration

Trouble in Paradise?
Scroll to top