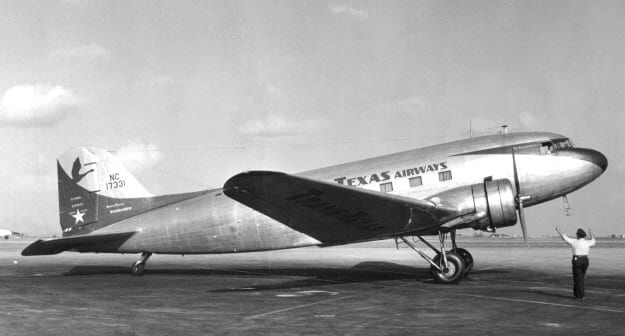 DC-3 pilots–the envy of kids and aspiring aviators for decades.

A confession: almost 60 years ago I wanted very badly to become an airline pilot.

It actually started almost 70 years ago, in 1943. An uncle in Arkansas died. We lived in Queens, in New York City, and my mother wanted to go the funeral. It took a little doing to get a couple of round-trip airline tickets because a priority was required. My godfather was Senator Joseph T. Robinson (D-Ark.) so that was accomplished in short order.

American Airlines flew a DC-3 from LaGuardia to Little Rock (and on to California). It took all day to get to Little Rock with en route stops in Washington, Richmond, Roanoke, maybe Lynchburg, Tri-Cities, Knoxville, Nashville and Memphis. The flight was named the Sun Country Special.

I was nine at the time and was totally smitten by the experience. I even remember the stewardess’s name: Madeline Condon.

The American DC-3s were called Flagships and were named for a state or city where the airline stopped. I later rode on Eastern DC-3s, part of the Great Silver Fleet, and United Mainliners.

When World War Two started, the military took 200 airplanes from the airlines leaving them with 160. The airlines were still able to fly their routes but with less frequency.

By 1953, I was a flight instructor, working at Camden, Arkansas. One day the powers-that-be told us our office would be moved so an airline could have the space closest to the runway. We were also told that the runway would be extended from 3,000 to 3,600 feet because that is what was required for the Trans-Texas Airways DC-3s that would soon start coming to call.

The runway extension was somewhat of a joke. It was squirt and gravel where the runway itself was concrete but it satisfied the need for length though I don’t think anybody ever used it.

Trans-Texas Airways was one of many local service airlines that flew DC-3s in the 1950s.

Virtually all the local service carriers flew DC-3s but one, Central, started out with eleven new Model 35 Bonanzas. They soon switched to the DC-3.

One day a truck showed up. In it was a non-directional radio beacon, a VHF radio, weather observation equipment, a teletype machine and some baggage carts. The new Trans-Texas station manager was in charge of the installation and did much of the work himself. He soon hired two more employees and they were ready to go.

There were four flights a day, starting with one in the morning that left Shreveport, Louisiana, and made stops in Magnolia, El Dorado, Camden and Pine Bluff, all in Arkansas, before terminating in Little Rock. Then it would go back to Shreveport, making all the stops. The process would be repeated in the evening.

Shreveport to Little Rock took just under two and a half hours. The straight line distance is just over 170 statute miles so all those stops did add time to the trip. If it sounds like a fast car would have been competitive, it might have been except for the fact that there was no Interstate highway system at the time.

Camden was roughly half way and the fare from Camden to Little Rock was $7. Camden to Shreveport was $9.

For the first time, our airport had an instrument approach.  The NDB was on the airport so the TTA pilots would overfly it and then fly a complete instrument approach. There was no radar and no DME so that was the only way to have a point of reference from which to start the approach.

This was done mostly in uncontrolled airspace so no clearances were actually required. I don’t recall the exact interface between TTA and the rudimentary air traffic control system of the day but do remember them talking about “through clearances” which I presume meant the airline dispatch system approved the approach and departure in the same breath.

None of the pilots at the airport had an instrument rating so all this was truly fascinating to us. There was a camaraderie between the locals and the TTA pilots and they shared with us the approach chart in case we wanted to use it. This came with the admonition to stay the hell out of the clouds when they were coming and going.

To me, what they were doing was the finest possible form of flying. It couldn’t get boring, what with all those stops, and the weather wisdom required to run those traps in thunderstorm season (most of the year) was considerable.

I was talking to one of the captains about thunderstorms one day and he told me he had spent many an hour sitting on the edge of the seat, hoping they would miss the maelstrom that is a thunderstorm.  Most of the time they were successful.  If they got into a storm, the way to fly was pretty standard. Trim for the proper speed, keep the wings level, and ride with the up and downdrafts. It was widely thought that if you got into a storm, the best way out was straight ahead. That might well still be true sixty years later.

There was plenty of flexibility in the TTA operation. The airplanes were self-supporting so if thunderstorms ran them off the route, they could land anywhere there was a 3,600 foot long paved strip. There were not too many of those around but I do remember a couple of diversions to Monroe, Louisiana. They would occasionally miss an approach due to low weather, but I remember only a couple of times when they overflew because of a crosswind on our single north-south runway.

The operation was dirt-simple when compared with today. Virtually all information related to the flights was via teletype. There was a message posted giving the times on and off the stops, the estimate for the next stop, the crew (Landers/Ferry/Clark is one I remember) and whether the airplane had a left or a right hand door. TTA had both military surplus DC-3s and some ex-American Airlines aircraft, thus the differences in the door location. That was important so the ground crew would know how to park the airplane.

To keep ground time at a minimum, only the engine on the side with the door would be shut down on most normal stops.  They carried enough fuel to fly the whole trip without adding fuel.

We all lusted for one of the front seats of a TTA DC-3 and we asked their pilots about that possibility. It was between none and none. They didn’t have a lot of pilots, probably about fifty at the time, and virtually all were ex-military. Waiting in the wings were squadrons more with DC-3 and weather flying experience. It would be an impossibly long line in which to stand.

That was the last thought I gave to an airline job. I got involved in the aviation magazine business and the rewarding career that I found there made me happy the airline option wasn’t quite available to me when I wanted it.

The last DC-3 airline flight that I rode was on Central Airlines, from Kansas City to Wichita with a stop in Topeka. I had left Newark on TWA and was supposed to change to another TWA flight but it was delayed.

I walked down the line of ticket counters to see if I could do better. Central had that DC-3 that was about ready to go and they had a seat.

It was a dark and stormy night and we flew all the way through an area of widespread thunderstorms. There was lightning and thunder and heavy rain when we were on the ground at Topeka.

Trans-Texas stewardesses had one of the most interesting jobs in aviation.

En route, the stewardess served drinks despite the inclement weather. We never hit any really bad turbulence and when we got to Wichita I walked around to the front of the DC-3 to give the pilots a thumbs-up. That was when I learned that this DC-3 didn’t have the weather radar that had come to most airliners by then. No radome. Those pilots were the last of a breed, never to be replaced.

The object of all the local service carriers was to generate enough revenue to fly without subsidy from the Feds. That was not going to happen with DC-3s on short hops so they started flying larger airplanes and the CAB allowed longer legs.

Most eventually got jets, DC-9s mostly, but by then the airlines were deregulated and the mergers made most of the local service names go away. For a fact, Trans-Texas Airways is a granddaddy of today’s Continental.

The local service airline system was a noble experiment, destined not to last for a number of reasons. One was the fact that the airplane they could afford, the DC-3, was relatively primitive. We pilots get all misty-eyed when we think about the grand old Douglas but airline passengers hated it. The steeply sloped aisle, the lack of pressurization and air conditioning, the relatively slow speed, and the not too roomy seats were all points of contention.

Most of the locals flew the airplane with 28 seats, seven rows of four, where the major carriers flew them with 21 seats, seven rows of three. On speed, if following a highway with a strong headwind, most pilots would fly directly over the highway so the passengers couldn’t look down and see the cars passing the airliner.

If you are interested in the history of local service carriers, “Airlines for the Rest of Us” by Stan Solomon is available from Amazon for $3.99 in the Kindle version. It is a truly interesting book for airline buffs.

Go or No Go: Florida build-ups
Scroll to top