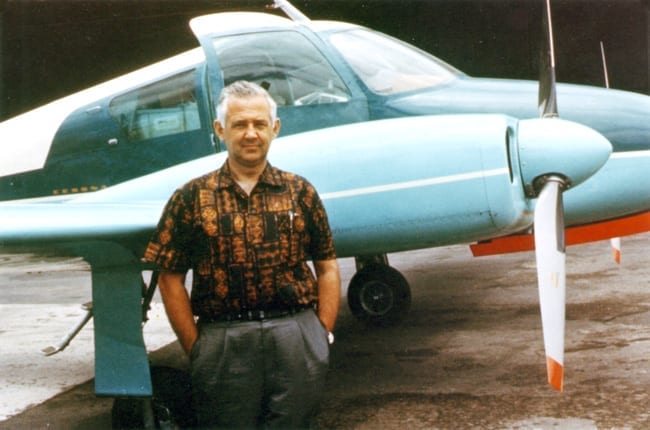 All in the Air Facts family

After reading Dr. Stephen Gray’s article about his trans-Pacific flight in a Beech Duchess, I had one of those old deja vu all over again feelings. In the first years that I worked for Air Facts, starting in 1958, we reported on a number of long distance flights. Some were flown by Air Facts contributors who then wrote about their flights in our magazine.

First I want to tell you a war story about long ago and far away. I will elaborate on the people after I tell you the story.

Fred Darragh visited over 150 countries on his around-the-world flight in 1962.

Two friends, Marion Hart and Fred Darragh, were flying around the world, in opposite directions. Marion was in her Bonanza; Fred was in his Cessna 310. They were not making their long flights to set records or to garner publicity. It was simply a great adventure for both of them.

Marion and Fred didn’t know each other until they wound up in the same hotel in India after a long day of flying. They met in the bar for a drink and once they established that they had something in common–both were card-carrying liberals and neither needed to prove anything–they started talking about people they might know.

It turned out that I was their only mutual friend in the world. As people would do at that time, in the 1960s, they decided to send me a post card. The card was obviously written after some drinks and when I got a mysterious card from India, I couldn’t figure out who had sent it or much of what it said.

I didn’t know the source of the post card until they got back home and one of them asked if I got the card they had sent. It would be a keepsake today but for the fact that I didn’t keep it because I didn’t know what it was.

Marion Hart flew her Bonanzas all over the world on a more or less continuous basis after she learned to fly when in her 50s. Aviation was one big adventure for her and she was no stranger to adventure. Before flying she had sailed a boat around the world. She was also one of the first, if not the first, women to graduate from MIT.

Much of Marion’s curious nature was inherited from her father, Isaac Rice, who was practicing law in the late 1800s when he became interested in transportation. He came to head up the Electric Boat Company which built World War One submarines for the U. S. Navy and later became the parent company of General Dynamics, which today builds Gulfstreams among other things.

Marion flew solo across the Atlantic many times, wrote countless articles in Air Facts, and was once awarded the Harmon Trophy. She wrote books, too.

Small of stature and slightly eccentric, many thought she would someday make headlines by disappearing in her Bonanza. She might have liked that better than Going West from a nursing home in 1990 at the age of 99. Wikipedia identifies her as a sportswoman and author and I suppose she would approve of that.

Fred Darragh was from Little Rock, where I knew him, and flew transports in World War Two. He set an unofficial record then, in the China-Burma-India theater of operations. He got a C-47 (DC-3) to a record altitude (flying the Hump) at a record weight with a record number of souls on board. There is no documentation of this and I don’t recall the exact numbers.

Fred used general aviation airplanes extensively in his business and personal travel but I don’t think he did the round-the-world trip again.

Peter Gluckmann, the flying watchmaker, disappeared on a trans-Pacific flight.

Peter Gluckmann, a San Francisco watchmaker, was an Air Facts author with ambitious record-setting goals. To start, he set around-the-world speed records in both directions, flying a Meyers 200 (which later became the Aero Commander 200). The speed of his record was not blistering because it measured distance against total elapsed time (as opposed to flying time) and he was not content to stop there.

The big record that Peter wanted to tackle was a non-stop distance record set the previous year, in 1959, by the legendary Max Conrad in a 250 Comanche, from Casablanca to Los Angeles, 7,668 miles. (We were using statute miles in those days.)

Peter knew that his Meyers probably couldn’t be fitted with enough tankage to attempt such a flight so he started trying to buy a special Bonanza J35 from Beech, N35U. Pat Boling, a United captain, had used this Bonanza in 1958 to beat a 1949 Bonanza record flight from Honolulu to Teterboro.

Boling’s flight was sponsored by Beech. The company helped get the fuel tankage up to 400 gallons through the addition of humongous (60 gallons each) wingtip tanks plus fuselage fuel. The price of the fuel for the flight was said (by Beech) to be $139.30.

The takeoff weight was 4,850 pounds against 2,900 pounds for the standard airplane and the plan was to fly non-stop from Manila to Wichita. He broke the record but landed short, in Pendleton, Oregon, with 11 gallons of fuel remaining, after 45 hours of flying. They had devised a way to add oil during the flight.

Boling was at the outer limit of human endurance when he landed. The trip was not made easier by airframe and induction icing over the Pacific along with some other issues. At one point he thought he was going to have to ditch, but that didn’t happen.

The Beech folks felt strongly that Boling’s flight was almost too much for both the human and the airplane so when Peter approached them about buying the airplane, they turned him down.

Beech was in the business of selling airplanes, though, and as Peter persisted, they finally relented and sold him the airplane though they would in no way sponsor or support the flight. When Peter bought N35U, I know it still had the big tip tanks and presume the fuselage tankage and other modifications were still in place.

Here I must pause for a disclaimer. I have a pretty good memory but all this happened over 52 years ago and most of the rest of the story is from memory. I can’t find much documentation of anything but this is how I remember it and I think it is substantially correct. Let us hear from you if you have heard anything different on the subject.

Peter knew that to fly farther he had to have still more fuel so he added 200 more gallons, to be carried in the fuselage. I have no idea where he found the room to put it but his fuel load at takeoff was a total of 600 gallons.

That would put the takeoff weight at about 6,050 pounds plus whatever the additional tankage weighed. That is a lot to ask of a 250 horsepower engine and Peter had told us he would be installing a JATO (jet assisted takeoff) bottle to the airplane for the launch. I assume that he did that.

The original plan was to start from Manila but the actual 1960 record attempt started in Tokyo, to fly as far as possible into the United States, hopefully to the East Coast. That would have broken all previous records by a substantial margin.

The takeoff was successful, though some observers reported that it took a while, and he started across the Pacific, never to be heard from again. There were a lot of rumors about radio transmissions but none could be verified. Peter just vanished, a small airplane in a big ocean.

There was no lack of speculation, though. It didn’t take much imagination to know that the airplane would have been a bear to fly and the lack of communication after takeoff suggests either a sudden loss of control or a catastrophic failure. A loss of control could certainly have been caused by an encounter with anything more than light turbulence. The stalling speed would have been about 90 knots and with the 250 horses all pulling, the indicated airspeed wouldn’t have been a big margin above that. At the high weight, a structural failure also had to be considered.

Peter was a methodical person and I am sure he had the airplane loaded to a flyable center of gravity. A Bonanza, though, close to the aft cg limit and flying at more than twice its normal operating weight, wouldn’t be easy to handle. Couple that with the big tip tanks and I doubt that the Tactair autopilot would have been very effective.

Some dismissed the attempt as “mission impossible.” That might be true but Peter thought it was possible and had thoroughly investigated every facet of the flight. The naysayers were right and he was wrong. The existing records stood.

The Voyager flight in 1986, by Dick Rutan and Jeana Yeager that went all the way around the world without refueling was a remarkable achievement. It was in an airplane that was especially designed for that one flight and was a different project than those long solo flights in certified single-engine airplanes.

For my money, I hope all those decades-old records will last forever. I also hope that pilots will continue to use general aviation piston airplanes to fly all over the world. That old adventuresome spirit is just one of the things that make pilots and flying special.

If you have curiosity about the details of planning and flying a long distance flight, read Charles Lindbergh’s “Spirit of St. Louis.” The book is a wonderful treat for anyone interested in such flights.

Autopsy of an accident and a confession
Scroll to top