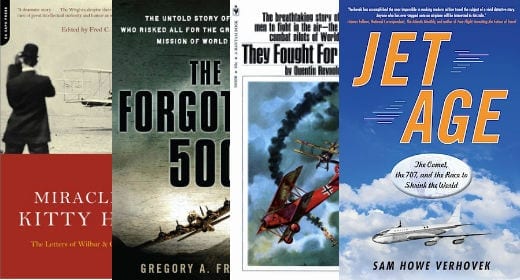 Among aviation history geeks, the titles of many early written works are as familiar as their family’s names—provided they’re not so geeked-out or senile that they’ve forgotten the names of their family. Anyone who’s read a biography of the Wright brothers learns that they were deeply influenced by such works as Progress in Flying Machines by their mentor Octave Chanute, or Pierre Mouillard’s shorter L’Empire de l’air, or Der Vogelflug als Grundlage der Fliegekunst by Otto Lilienthal. (How’s that for pretentious? Three different languages in one sentence. And I didn’t even attend one of them expensive Eastern colleges.)

Yet in recent times, few have personally gazed upon these ancient—often wildly inaccurate—texts, pamphlets and articles, except the aforementioned senile aviation history geeks or people who are writing aviation-history books. And it’s not only because they’re written in three or four different tongues. Instead, we rely upon the power of historians to describe the works to us, and something invariably gets lost in translation.

Take, for instance, this excerpt from the obscure Aeronautical and Miscellaneous Note-book by Sir George Cayley, the now-little-known English gentleman-farmer scientist who discovered the principles of flight through acute observations of nature:

“I was much struck with the beautiful contrivance of the chat of the sycamore seed. It is an oval seed furnished with one thin wing, which one would first imagine would not impede its fall but only guide the seed downward, like the feathers upon an arrow. But it is so formed and balanced that it no sooner is blown from the tree that it instantly creates a rotative force preserving the seed for the centre, and the centrifugal force of the wing keeps it nearly horizontal, meeting the air in a very small angle like the bird’s wing, and by this means the seed is supported till a moderate wind will carry it in a path not falling more than one in 6 from an horizontal one, so that from a moderately high tree it may fly 60 yards before it reaches the earth.”

Thus from a single seed sprouted the airplane. Could today’s scientist so poetically describe orbital mechanics as it applies to the retired space shuttle? Hell, I’ve interviewed a bunch of astronauts and other than talking about having to eat crappy food on the space station I can’t understand what they’re saying.

Cayley’s musings reminds me of Henry David Thoreau’s The Dispersion of Seeds, though Cayley lacks Thoreau’s Transcendentalist bent and his gentle insight into the nature of nature—but then the two do have different purposes. Thoreau built a house for a little over $20, and Cayley bankrolled a flying machine. Anyway, here is a brief list of my favorite aviation books, making special note of the practical hands-on airplane knowledge they impart. And what’s more important, they’re all in easy-to-understand English.

Whether in a big chair in front of a fire or sitting in a beach chair with your feet in the water, books can transport us, inspire us, inform us. Do you have a favorite aviation book? Why is it special to you?

Go or No Go: Oshkosh!
Scroll to top