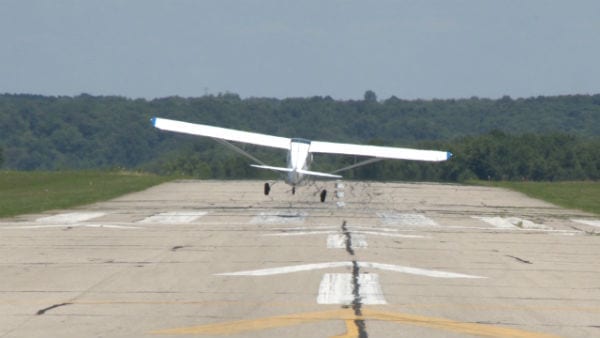 Boxers or briefs or……?

Crosswind landings are a real challenge and making a perfect one is every bit as satisfying as a flawless ILS to minimums or a graceful eight-point roll. As a student I had a hard time learning to do them and later, as an instructor, I had a hard time teaching them. You simply can’t talk as fast as you have to think when landing in a gusty crosswind.

There are different ways to deal with crosswinds and not much agreement about how to best fly through a good crosswind landing.

To crab or to slip, that is the question.

One school of though is that it is best to crab into the wind and kick (rudder) the airplane straight with the runway right before touchdown. Another is to lower the wing into the wind with aileron enough to take the drift out and maintain runway alignment with the rudder. Or, especially in heavier airplanes, some pilots just land with the drift in and let the airplane straighten itself out after touching down. This might be called the screech and swerve method and don’t try it in a tailwheel airplane.

I actually had a change of heart about crosswind landings well into my flying career. Originally I would crab into the wind until close to the end of the runway and then put a wing down into the wind, keeping it straight with rudder, and using that technique into the touchdown. My father used to razz me about this, saying it made no sense to land on one wheel when you had two.

I decided to try it his way and crab well into the flare and then push the nose straight with the rudder. I would be ready with aileron if the airplane stared drifting before touchdown.

I was a little surprised at how much force it took on the rudder of my Cessna 210 to push the nose straight but once I got the hang of it, crosswind landings actually seemed to work better. I did usually touch down on both main wheels and seldom was much of any aileron required until after touchdown.

How do you handle crosswind landings? Do you find them difficult? Have you ever come close to losing control of the airplane during a crosswind landing? Do you feel you were taught how to do this or did you figure it out on your own?

Is your checklist really necessary?
Scroll to top