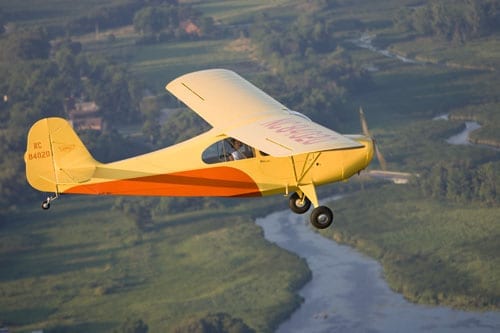 On October 25, 1951 I, a rebellious 17-year old juvenile delinquent, walked into the flight school office at Harrell Field in Camden, Arkansas, to take a flying lesson. My instructor, Rudy Peace, a wonderful person and pilot and later a fine friend, awaited.

Also waiting was Aeronca Champ (7AC) N1154E. It was to be my third flight in this airplane. I had flown ten dual flights in a Cessna 140, N1808V, but someone had hurt that airplane so it was unavailable.

We went out and did circuits in the Champ for about 40 minutes. Then Rudy had me stop by the runway. He said the time had come, he made a slight adjustment to the trim to compensate for his leaving, and told me to fly a pattern and come back in and land.

When I opened the throttle I felt like I was in a different world. The 65 horse Continental made its usual threshing machine sounds, though, and after a little roll I raised the tail. I knew it would pull to the left when the tailwheel lifted off but was slow reacting so there was some swerve in the takeoff. I was relieved when it came time to fly.

The runway looked far away and even strange. Rudy, my protector, was but a speck by the runway. I had an “aw shucks what have I done moment” and then collected my thoughts and continued.

There was a stationary front to the southeast with a high overcast covering the area. The wind was light northeasterly so I knew I would have a slight crosswind on the north-south runway.

I turned base leg and reduced the power to idle at what I thought was the correct time and then set up in a 60 mph glide.

On final, I thought I was a little higher than usual but still okay.

As I crossed the runway threshold I had a “do or die” sensation. I was thankful for the good view of the runway ahead, better than it had been in the 140, and faced the next challenge of beginning the flare at the right time.

The main gear contacted the runway (I would have liked to say it kissed but it was a sloppy kiss) before I was ready and the airplane bounced a bit. I just sat there until the ground was close again and resumed adding back stick.

The final touchdown wasn’t graceful. It was more a plopdown than a touchdown. There was a little swerve because of plopping with a bit of drift. The airplane was down, though, and I taxied back to where Rudy waited. He asked if I wanted to do another. I told him that I had had my excitement for the day and we taxied in.

And you know what? I pretty well did.

Land of the midnight sun
Scroll to top