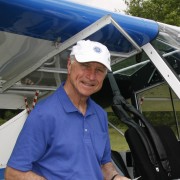 Paul Richardson earned his private pilot license before he graduated from high school in 1953 and continued flying while a student at the University of Michigan. After a variety of flying jobs, including a stint in the Air Force Reserve, he was hired by Eastern Airlines where his first assignment was as a DC-7 co-pilot, later moving to the Lockheed L188 Electra, Boeing 727, Douglas DC-9 and in 1972 he was promoted to Captain DC-9 and held various other positions at Eastern including Staff Vice President of Flight Training. When Eastern closed, he flew L1011s internationally for charter flights. When he retired, he didn’t think he would fly again until he saw a restored Eastern DC-7 at Oshkosh, which led to the purchase of an Aviat Husky. His wife is also a pilot and together they fly the Husky all over the United States strictly for fun.

Did you ever hear about the horses that were used to pull the fire engines in the 19th and early 20th centuries? The author says he became one at Oshkosh in 2010 when he saw a beautiful DC-7 take flight. Read why this one takeoff led to a new adventure for this pilot.