Blog - Latest News
You are here: Home1 / Article Archive2 / I was there3 / Memories of flying the Boeing 727 “three holer”

The spiral bound 58-page illustrated booklet pictured below, TWA’s introduction to employees of the newest addition to our fleet, turned up in my company mailbox early in 1964. It was only of passing interest at the time. I wouldn’t be flying it for another ten years, after we started parking our Convair 880 fleet, and then I would fly it for the next twelve years as an ORD-based captain. 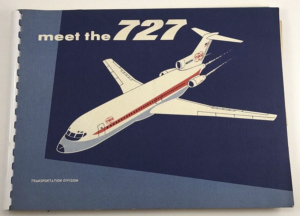 There was no doubt you were flying a Boeing. It had that same “Mack truck feel” about it as the 707, but also like the 707 it was as sound and reliable as a US Dollar (in 1964). The cockpit and fuselage cross sections were the same as the 707 but that is where the similarity ended. Our first 727s, the dash 100s, grossed out at about a third of the 707-100’s weight but had two thirds of its thrust. Therefore, it was a little rocket by comparison.

The Seven Two had four main gear wheels as opposed to the Seven Oh’s eight. The 707’s wings and fuselages were much longer. The 707 had a ventral (bottom) fin with a replaceable hardwood skid in case of over-rotation, whereas the 727 had a tail skid that extended and retracted with the landing gear. The 727, flown domestically only, did not have the spear atop the vertical stabilizer for an HF antenna. We called her the three holer. When the wide body L-1011 and the DC-10 tri-jets came along, she became the “little three holer.”

The biggest difference in the 727 was its wing. Boeing wanted to deliver a (relatively) short field airplane, which called for many high lift device improvements and resulted in a wing with about as many moving parts as Rubik’s cube. Leading edge (LE) devices consisted of four LE flaps on the outboard, or skinny part, of each wing and three LE slats on the inboard, or fat part of each wing.

These not only increased lift but also caused the whole wing to stall at about the same speed to prevent the violent pitch-up characteristic of most swept wing aircraft. The LE devices deployed automatically with the extension of the trailing edge (TE) flaps, which were massive, triple-slotted, Fowler types. These significantly increased the wing area and camber, increasing takeoff performance at the takeoff setting and landing performance (and a lot of drag) when fully extended. 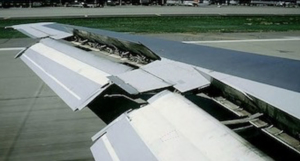 To get its impressive short field performance, the 727 wing had a lot of moving parts.

There were both inboard and outboard ailerons and the outboards were locked out unless flaps were extended. In cruise, the inboard ailerons, in conjunction with the flight spoilers (raised on the down wing in a bank), provided excellent roll control with practically no adverse yaw. There were five flight spoilers on each wing and two ground spoilers. All spoilers were fully deployed on touchdown, killing virtually all lift and placing the aircraft’s weight on the landing gear for effective braking. It was quite a shock the first time passengers seated aft of the wing saw that they could see the ground through the middle of the wing when both flaps and spoilers were fully deployed!

The airplane was heavily promoted by all who operated it. Lighter, faster, quieter! Eastern Airlines even named it their “Whisperjet.” The joke among non-Eastern pilots was, “What is the Whisperjet saying?” The answer was, “I’m going to kill you.”

Most airplanes have an Achilles heel and the 727 was no exception. The Seven Two had a very nasty Dutch Roll characteristic. For that reason, there were two rudders with yaw dampers completely independent of each other. The yaw dampers were both required for dispatch and drastic speed and altitude reductions applied if only one was operative. The flight handbook warned that, “At high altitudes and cruise Mach numbers, the Dutch Roll characteristics of the 727, without the yaw dampers, is undamped and divergent. If not corrected it will deteriorate into a complete loss of control.” (Read a good explanation and demonstration of Dutch Roll here.) 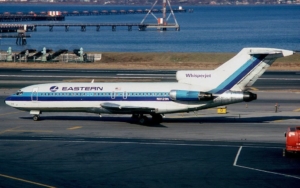 As with so many successful designs, the manufacturer soon decided to stretch it. They added 22,000 lbs. with practically no increase in power, which caused one fellow I overheard to later say about the stretch, “She’s shore purdy, but she don’t fly so good.” Another captain told me he “had over 5000 hours in the stretch and 4000 of them were at climb power.” Well, our little sports car then soon became known as Miss Piggy.

The wags gave each ship a piggy name—it was usually hidden behind the buttons on the control yokes. There was, for example: Pigadilly; Sows about it?; Lard sakes!; Trough aloft; Pig o’ my heart; Star of Beiroot (the one that was hijacked to Lebanon); Auld Lang Swine; San Juan Sow; Queen of the Sty; and on, and on…

After all’s said and done, the 727 was a remarkable machine that served its operators well for many years. Boeing built almost 2,000 copies of the 727s between 1963 and 1984. Are there any 727s still flying? Yes, however you’re not likely to be able to fly on a 727 as a passenger anymore. Most active examples today are used as freighters or VIP transports. The last airline to operate passenger services with the 727 was Iran Aseman Airlines, who retired theirs in January 2019.

Friday Photo: Miss Piggy and me
Scroll to top