Blog - Latest News
You are here: Home1 / Article Archive2 / I was there3 / A tail rotor failure at night in Saudi Arabia

I was based at Riyadh Air Force Base in Riyadh, Saudi Arabia, flying a AS365N-1 Dauphin for the Medical Services Division of the Royal Saudi Air Force (RSAF). We had been dispatched to a small village 120 clicks out of Riyadh to pick up a male who had drowned and was on life support. I was the aircraft commander and had an RSAF first lieutenant as second in command; in the back was a doctor and two flight nurses. We had departed XXN at approximately 0230 and expected to be 1:28 en route. The landing zone (LZ) at the village was a parking lot adjacent to the hospital.

We were at 6,000 ft. AGL and it was a beautiful but typical Saudi night. George, as I called the autopilot, was flying the ship. We were IFR and had absolutely no ground reference—and expected none until we came within visual range of our destination. It was so calm you had to look at the panel to make sure you were indeed flying. As we reached 15 DME from the hospital, we could see the lights of the emergency units awaiting our arrival. We started a slight descent to 2500 ft. AGL, completed the pre-landing checklist, and turned to a 5-mile final to the LZ. At that time I lowered the gear and adjusted the power and attitude to increase drag. 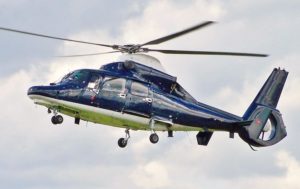 The Dauphin has a unique tail rotor design, called a Fenestron.

As I added pedal to adjust for the change in our power setting, I realized very quickly that we had no tail rotor authority. (The AS-365 did not have a normal tail rotor; instead, the tail rotor was enclosed in the tail fin and called a Fenestron, which operates like a ducted fan.) I quickly checked to verify the condition and found that I had a full range of left and right pedal, but with no result. I immediately told the SIC to raise the gear while I adjusted power in order to climb to a safe altitude, at which time I verified that we did, in fact, have a complete anti-torque failure.

We conducted the emergency procedures for anti-torque failure two times then made the decision to make an emergency landing in the parking lot. I wasn’t about to fly that thing all the way back to Riyadh, not knowing what had caused the problem. We had no choice but to land at the hospital. I instructed the SIC to contact the Saudi Police at the hospital and to advise them to clear the parking lot and to have fire-rescue stage just outside the wall. (All desert villages had a 6-8 ft. wall around the village to keep the sand from burying everything.)

We had very carefully climbed to and leveled off at 2,000 ft. AGL, so we set the heading and altitude bugs while we conducted our emergency procedures. When nothing worked we nursed the ship around to start a very shallow 4 DME final at approximately 70 knots with as few power changes as possible. We had previously notified Riyadh of our situation, advised the medical crew we were making an emergency landing, and for them to take the necessary precautions.

It was not a very large parking lot but my main concern was the wall. We would have to clear that wall with at least a 50-65 kts of forward airspeed in order to keep the ship in trim, then touch down and hope the brakes held. Fortunately, there was no wind at the LZ. As we approached the wall, I increased power and pulled the nose up just a little in order to increase our height enough for the tail to clear the wall. As I did so, the nose, as expected, turned about 10-15 degrees. We cleared the wall with the main gear, I counted to three, and lowered the collective, causing the nose to return to a normal position.

The parking brake was already set and as soon as we impacted the ground the aircraft skidded to a full stop in less than 30 feet. The aircraft sustained no damage and there were no injuries. Two hours later, a second ship arrived, we loaded the patient into that aircraft and took the patient to Riyadh, while the other crew stayed with the second ship and the mechanics that had been sent to determine the cause of the failure. 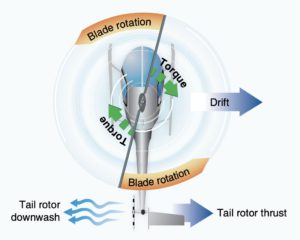 Without the tail rotor, a helicopter in a hover is uncontrollable.

The facts behind the failure went deep. The original contract to provide rotor-wing aircraft to MSD was supposed to be awarded to Bell Helicopters. However. Aerospatiale came up with a last-minute, sweetheart deal that provided MSD with nine 365s. After the dust/politics settled, Bell provided two 212s. Because of the late offer, Aerospatiale had to come with the 365s in medical configuration almost overnight. They had them on the production line but the ships had to be medically configured as well as clearing final production. In their haste, the push-pull rod that changes the pitch of the anti-torque blades (which correct for power input), was installed incorrectly. As the rod moved, it wore on the safety wire that held the rod in place. Once that safety wire failed, the anti torque system failed, resulting in complete loss of directional control.

We were very, very fortunate in that our failure occurred during a reduced power setting. If the failure had occurred at a hover, where more power and thus more anti-torque input was needed, the ship would have immediately inverted. (Which is exactly what happened during a later event). However, if the event occurs during flight, while still a serious emergency, it is easier to deal with. The procedure is called a run-on landing, which is what we did in this case. In some events, depending on weight, if the tail rotor fails at a hover, the pilot quickly reduces power and the aircraft settles back to the ground. That’s the simplified version.

NOTE: “For every action, there is an equal and opposite reaction.” Some guy named Newton called it his Third Law of Motion. I have no idea what the first two were! Anyway, the little blades on the back of most rotor-wing aircraft are called, wait for it… the tail rotor (since the big rotor on top is called the main rotor). Tail rotor is easier to say and more socially acceptable, than anti-torque device. As the main rotor turns one way, the main body of the aircraft wants to turn the opposite way. Thank you, Mr. Newton. Joe Candlish
Joe started flying in high school, served in the military, and retired in 2022 at age 80 with 26,000 hours total time, including 21,000 of rotor-wing time. His last job was as Chief Pilot, Walton County (FL) Sheriff's Office. Most of Joe's rotor-wing experience was flying wildfire and external load ops, but he did spend seven years doing "EMS stuff" in the US, Saudi Arabia, and Scotland. He also flew offshore in the Gulf and North Sea, was an FAA Part 135 Check Airman in nine different aircraft and served as Chief Pilot, Director of Ops under FAR Part 135 for a total of 13 years. At last count, he had worked for 23 companies as a contract pilot.